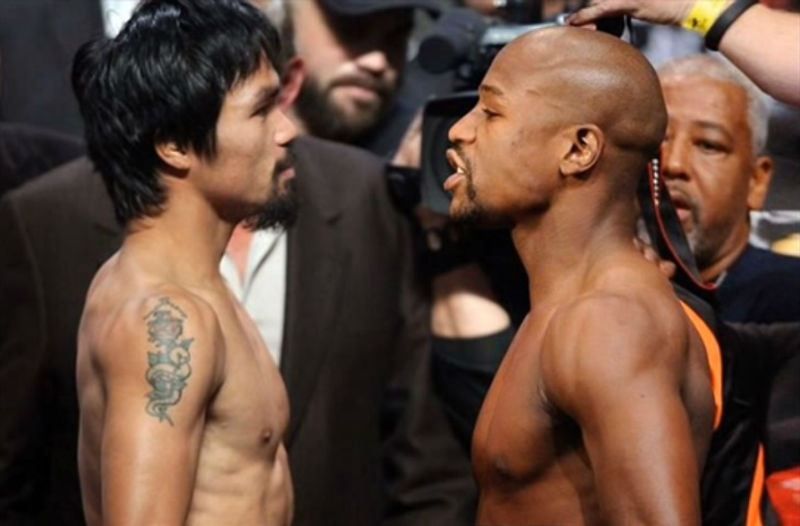 With the Pacquiao vs. Mayweather fight on for May 2nd, Pacquiao fans are in a frenzy. Not only will the long time champ finally prove to the world that he’s the G.O.A.T. but also that he’s ready to do what he’s always done best – make the naysayers eat their words.

Do you think you’re a big Manny Pacquiao fan? If you say yes to three or more of these items, you probably are!

1) You know all the names of his five children: Emmanuel Jr, Queen Elizabeth, Princess, Michael and Israel.
2) You’ve already bought tickets to the fight. So what if you’ve spent a few thousand dollars – it’s MANNY PACQUIAO fighting.
3) You can’t afford tickets so you’ve already planned a Pacquiao vs. Mayweather viewing at your house the minute the fight was confirmed. You’ve invited all your friends and planned the menu – you’re all set!
4) You own a pair of Manny Pacquiao shoes. Remember when Nike released those shoes? Yeah, you’ve invested in a pair. Or two.
5) You’re not Filipino but you wear shirts with the Philippine flag on it. Especially when you watch a Pacquiao fight. 6) You’ve switched your boxing stance and claim that you’re now a southpaw.
7)  You know exactly where Sarangani Province is. Before, you couldn’t even point out the Philippines on a map!
8) You’ve found a new passion in singing karaoke. And sometimes, you even sing Filipino songs.
9) You have a jacket or t-shirt that says TEAM MANNY.
10) You’ve posted on Facebook or on forums a detailed analysis as to why you think Pacquiao will beat Mayweather. 11) You know that Pacquiao isn’t pronounced Pah-kee-yaw. It’s Pah-kyaw. Get it right, people!
12) You’ve started wearing a rosary around your neck, and you aren’t even Catholic. Sometimes, you even find yourself kissing it before you go into boxing training.
13) You start making the sounds he does during training.
14) You think Manny Pacquiao’s accent is endearing, not funny. In fact, you get offended anytime someone makes fun of it.
15) You know who Mommy Dionisia is. And you know about her “powers”. 16) You were really heartbroken over the fight with Marquez. You might have even shed a tear or two.
17) You believe that Pacquiao is proof that hard work and perseverance can get you anywhere.
18) You own/want a pair of Cleto Reyes gloves.
19) You don’t think that Manny Pacquiao should retire anytime soon.
20)  You’ve started boxing training and can’t wait till you start sparring so you can knock someone out, just like Pacquiao. 21)  You think of your boxing coach as the Freddie Roach to your Pacquiao.
22)  You start averaging a thousand punches during boxing training, or at least try to.

Tell us, how big of a Manny Pacquiao fan are you?