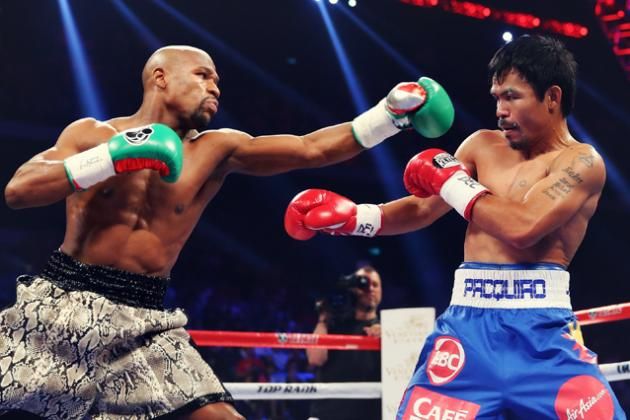 If you’ve been on social media or have switched on your TV in the last 24 hours, you’ve probably heard that the Manny Pacquiao vs. Floyd Mayweather fight is finally on!

After six years of speculation, trash talking and even a lawsuit – the greatest fight in the history of boxing will finally take place on May 2nd at the MGM Grand, Las Vegas. For boxing fans (and the entire Filipino population around the world), this fight will truly be one that will be remembered and talked about for years to come.

At Evolve Daily, we’re big boxing fans and we know that you guys are too. We’ve curated the opinions of boxing experts from all over the world, giving us the lowdown on who they think will win this epic fight: Because he has more knockout power
Kelsey Mc Carson: “Pacquiao is a power puncher with unworldly speed. He devastates his opponents by hitting them both hard and often. In essence, he’s a volume puncher who hits with force and rapidity, something that has made him one of the better offensive fighters in boxing history.”

Rafe Bartholemew:  “Pacquiao is such a dynamic and creative offensive fighter that when he decides to throw everything in his arsenal at Mayweather, something will work. Pacquiao will get the knockdown or two that he needs to edge Mayweather on the cards. Maybe, just maybe, he’ll get a stoppage.”

Because he’s more aggressive
Bernardo Pillati: “It will be a tense, highly technical and caution-filled fight in the early rounds. Pacquiao will begin to loosen up from the fifth round, will show great explosiveness and aggressiveness, apply the best shots and dominate the battle for a clear unanimous decision.”

Samuel Ha: “Pacquiao is known for his relentless pressure and Mayweather is known for his passive stick and move style…Manny is never discouraged. There’s no doubt that Manny will be willing to throw 5 punches to land just 1 while Floyd will be content to throw 1 or 2 punches at a time (which by the way, can miss).”

Because he’s more battle-tested
Nigel Collins: “I’ve never bought into the opinion that Mayweather would easily outbox Pacquiao. I thought it was a 50-50 fight when the match was first talked about years ago and I still think it’s a 50-50 fight today. Whether they have declined with age or adjusted their styles in order to continue to compete successfully against younger men really doesn’t matter.”

Carlos Narvaez: “We are facing the most difficult fight in the career of Mayweather. Pacquiao is presented as the toughest test for the pound-for-pound king because of his speed, counterattack and stamina. “PacMan” also has punching power and can be as slippery and elusive as Mayweather himself, whose energy we have already seen begin to wane in late rounds when pressed.”

Because he has better offensive techniques
Samuel Ha: “The subtle feints and the crazy angles will pose a serious problem for Floyd, like it has done all of Pacquiao’s other opponents. The question is, how long will it take Mayweather to adjust to the feints and angles of Pacquiao?  Mayweather needs to be able to read them and not fall for them(easier said than done), or make Pacquiao miss because the more impatient he misses, the less he feints and the more wild he gets.” Because he’s younger
Amir Khan: “Age gets to all fighters and that time is coming for him. You can see that if you go back over Mayweather and Pacquiao’s recent fights. I’m not saying they aren’t great fighters, because they are, but age is catching up to them.”

Because he’s smarter
Ivan Calderon: “Being a boxer myself, I think Mayweather’s a more intelligent boxer. Pacquiao’s fast, but that’s it.”

Because of his defense
Dan Rafael: “They are both great fighters and, of course, Pacquiao’s southpaw style and sheer aggression probably would give Mayweather trouble since Pacquiao’s punches come from all angles and he is strong with both hands. But even if it would be a very tough fight for Mayweather, his defense, ring smarts and precise punching would be enough to get the job done.”

Salvador Rodriguez : “Although we have not seen the knockout power that characterized him, Pacquiao has the speed and strength to surprise Mayweather, but still, I think Floyd’s intelligence, defense and discipline in the ring will be enough to earn a victory by way of points.”

Eric Raskin:  “Mayweather is the most masterful technical boxer the sport has seen since Pernell Whitaker, he doesn’t get flustered, he is brilliant at making adjustments, and he’ll make enough of them to win a clear, close decision — just as he would have if the fight had taken place five years earlier.”

According to Odds Shark, Mayweather is favored to win. He’s never lost and has quite the number of advantages walking into the fight. Then again, you can never predict what might happen– will Pacquiao pull an upset and knockout Mayweather in the last few rounds? We’ll all have to wait till May 2nd to find out.