So you’ve decided to give Brazilian Jiu-Jitsu (BJJ) a shot. Good for you! You’re about to embark on a journey towards self-discipline, self-discovery, and improved fitness that will carry over to your personal and professional life. You’re going to get to meet lots of cool people, some of whom will become your friends for life.

There’s no need to be intimidated heading into your first class. Keep in mind, every one you’ll meet in the BJJ gym has once been in your shoes, so it’s easy for them to emphasize with you. Your instructors have lots of experience working with first-timers, and they’ll help you set realistic goals you can meet and give you an extra push when you need it.

As a beginner, your first month of training will be filled with new experiences as you try to learn the techniques and drills you are being taught each BJJ class. By the time your first month is over, you’ll already have dozens of these drills and techniques committed to memory.

Here are a few things you will quickly find out during your first month of BJJ training: 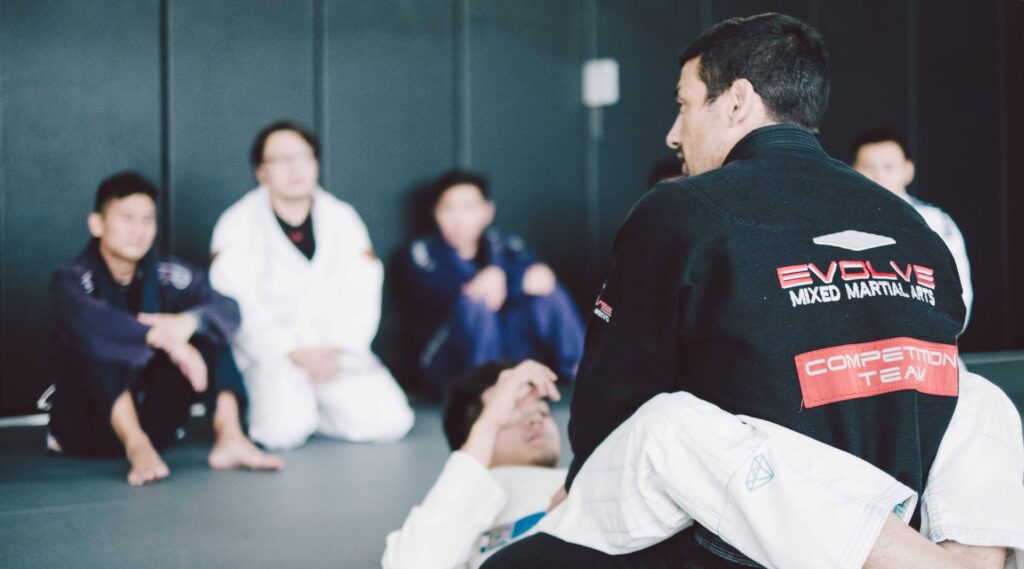 Nothing prepares you for the way BJJ classes work every fiber of your body. You might think you’re already fit heading into your first training session, but there are levels to being in shape. Don’t be surprised to find yourself feeling gassed after drilling or rolling for a few minutes. Running a few miles a day won’t be enough to get you in shape for the intense core workout you get from BJJ.

You simply need to pace yourself, and gradually work your way up. If you find yourself falling behind the rest of the class during drills, don’t worry. It’s normal for new students to have a hard time keeping up with the workouts. Just give it your best and try to complete every drill even if it means you finish last. Don’t cheat on the motions trying to be competitive.

It’s a very common saying in martial arts circles, yet it’s almost impossible to truly understand what the phrase “technique beats strength” means until you experience it firsthand. Do not expect to walk into the gym and start tapping out more experienced students simply because you’re bigger than they are. It doesn’t work like that.

Sure, being stronger can be advantageous when two equally-skilled people roll, but it doesn’t really do much when one person is more skilled than the other. Make sure you keep your ego in check when you start training BJJ because it’s guaranteed that you’re going to get tapped by someone smaller than you are.

That’s why it’s important to focus on the details of each technique so that you understand the science behind it. When you’re stronger than most of your training partners, there’s always a tendency to use brute force to secure positions and submissions, but that only hurts you in the long run. Avoid trying to force things when you roll and instead focus on doing things properly. Remember, sparring is the time you fine-tune your techniques, not the time to find out who is the best student in the gym.

3) A relaxed fighter is a better fighter

A pre-roll chat during a BJJ class at Evolve MMA (Far East Square) in Singapore.

One word you are going to hear a lot during your first month of BJJ training is “relax.” Your instructors will constantly tell you that and so will your training partners. When you roll with more advanced belts, you hear that word a lot.

That’s because most people naturally become tense when put in combat situations. The problem is that being tense doesn’t help you one bit during a fight. It prevents you from making good decisions, which makes it harder for you to observe and react to your opponent’s movements. That’s particularly crucial for BJJ practitioners since it’s one of the most cerebral martial arts. It requires you to outthink your opponent in order to emerge victorious.

It’s harder to listen to instructions and drill techniques when tense since it tends to make you overthink things.

Being tense also leads to lots of wasted movements, which means you get tired a lot faster.

Don’t worry, they won’t keep telling you to relax forever. By the time you’re done with your first month of training, you will be calmer and will hear it less often.

4) Flow with the Go when rolling

This phrase was popularized by the Gracie family. It’s an important essence of BJJ. It’s an adaptation of the popular phrase, “go with the flow.” BJJ is all about flowing – which is the smooth transition from one position to another – but you don’t want to end up in a position where you constantly find yourself reacting to your opponent’s moves. Instead of going with the flow, you want to flow with the go. That means you take advantage of any opening’s your opponent gives you and use them to take control of the fight.

Any time you roll with more advanced students during your first month, you will quickly realize that they are always a few moves ahead of you at all times. With time, you will also learn to set up and chain techniques together.

Learning BJJ is one of the best things you can do for your physical and mental health. It will mold you into the best possible version of yourself. Start your journey today by signing up for a complimentary trial class!