5 MMA Stars Who Made The Transition To The Silver Screen 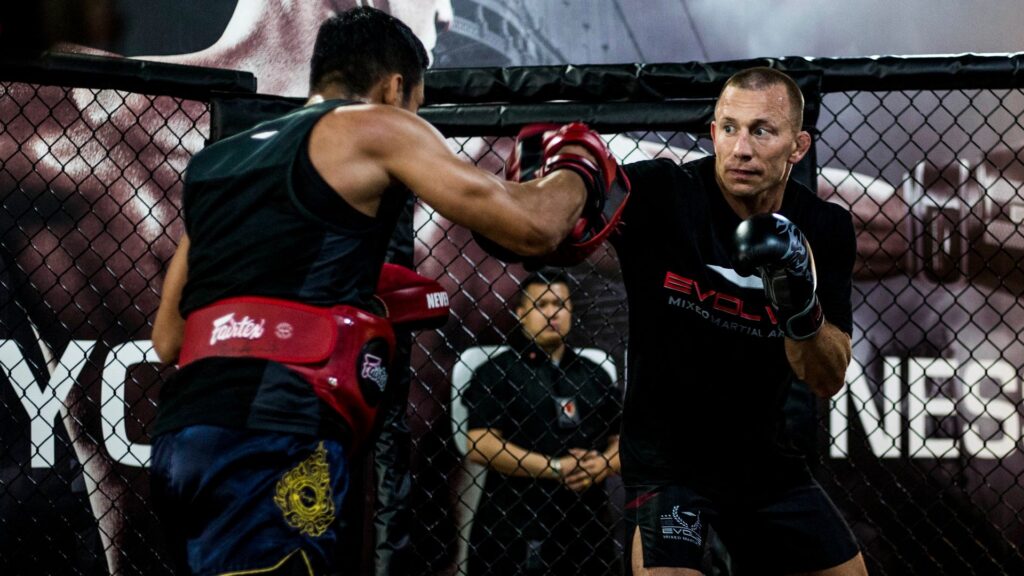 They are real-life action stars who bring audiences to the edge of their seats both in the cage and on the movie screens. These mixed martial artists all began their careers trading punches at the center of the mat, in front of thousands of people in sold-out arenas. But they also turned to Hollywood to showcase their skills.

MMA fighters have a lot to offer the action film genre nowadays. First of all, fight scenes are much more fluid and natural looking, and much more believable. But more importantly, they lend a certain drama and flair to fight scenes that just can’t be replicated by stuntmen or other actors who have no fighting experience.

This handful of individuals actually know how to throw down. As for acting skills, well, they’re learning. And they all get better after each film.

Let’s take a look at some fighters who turned to acting. Today, Evolve Daily shares five MMA stars who made it big in the movies.

Former UFC welterweight champion Georges St. Pierre, more popularly known as GSP, was at the height of his powers when he chose to walk away from the sport of mixed martial arts in 2013. GSP had grown tired of competition, so he vacated his title after a period of six years where he absolutely dominated.

A huge reason for him leaving MMA, however, was also due to his budding movie career. He first appeared on a handful of low budget titles such as Never Surrender, Hell’s Chain, and Death Warrior, but got his first big break when he landed the role of Georges Batroc in the Marvel film, Captain America: The Winter Soldier.

Two years later, GSP was cast for the role of Kavi in the reboot Kickboxer: Vengeance, and Bruno Sinclaire in the 2017 movie Cartels. He is currently slated to portray the role of Celtilos in a film called Ryse Victrix which is currently in pre-production.

Former UFC women’s bantamweight champion Ronda Rousey put women’s MMA on the map during her epic run through the ranks which lasted from 2011 to 2015. Over this period, she became known as the ‘arm collector’ because she would finish the majority of her opponents by armbar.

At the height of her powers, Rousey was deemed unbeatable by most as she had taken care of any opponent placed in front of her quite easily.

The former Olympic bronze medalist, however, stepped away from the game after getting embarrassed by former pro boxer Holly Holm in 2015. She would focus on her acting career shortly after with appearances in the movie Furious 7 as well as a small role on Entourage.

Rousey returned to the UFC in 2016 but was stopped by current champion Amanda Nunes. She hasn’t returned to competition since and has instead taken up a role with the WWE.

Known as a pioneer of women’s MMA, Gina Carano’s good looks eventually translated to the big screen. She started off her career after an ex-boyfriend introduced her to martial arts, particularly kickboxing. After discovering that she had a natural talent for fighting, Carano decided to pursue it full time.

During her prime, Carano became known for her power and aggressiveness that went alongside her beauty. When she suffered her first career defeat at the hands of Cristiane “Cyborg” Justino however, Carano exited the MMA scene for good.

Not long after, she landed the lead role of critically-acclaimed movie Haywire, where she co-starred with talent such as Channing Tatum, Ewan McGregor, Michael Douglas, and Antonio Banderas. Following that, she was also on Fast & Furious 6 with Vin Diesel, Paul Walker, and Dwayne Johnson. Years later, she portrayed the role of Angel Dust in the superhero movie Deadpool with co-star Ryan Reynolds.

Needless to say, Carano’s acting career has been quite successful.

UFC legend and Hall of Famer Randy Couture is one of the godfathers of the sport of MMA and is one of two fighters to have held both the UFC heavyweight and light heavyweight titles, the other being Daniel Cormier who today holds both simultaneously.

During his prime, Couture was one of the most skilled fighters in the game. He has beaten names like Vitor Belfort, Chuck Liddell, Tito Ortiz, Tim Sylvia, and Brandon Vera. Over the course of a legendary 14-year professional career, Couture became a sensation.

Couture began his acting career with an unnamed role in the 2003 movie Cradle 2 The Grave starring Jet Li and DMX. But his popularity in the movies really escalated when he starred in The Expendables series alongside other big-name action stars Sylvester Stallone, Arnold Schwarzenegger, and Jason Statham.

Former UFC light heavyweight champion Quinton Jackson, better known as ‘Rampage’, has perhaps the most number of movie appearances of the athletes on this list. The American began his acting career taking part in low-budget action flicks such as Confessions of a Pit Fighter, Bad Guys, and Death Warrior.

He got his big break in 2010 when he took on the role of B.A. Baracus in the hit movie, “The A-Team”, a role popularized by the legendary “Mr. T.” on the original TV series. After that, he played Wallace in the 2012 film Fire With Fire starring Bruce Willis and Rosario Dawson. He then played Wolfman in the movie Vigilante Diaries starring Michael Jai White.

As for MMA, Jackson is one of the most popular fighters in history. He owns victories over guys like Chuck Liddell, Dan Henderson, and Lyoto Machida. Unlike the rest of the guys on this list, Jackson is still an active fighter. He last competed in September of 2018, knocking out Wanderlei Silva in the second round.