5 Of The Most Courageous Mixed Martial Artists Competing Today 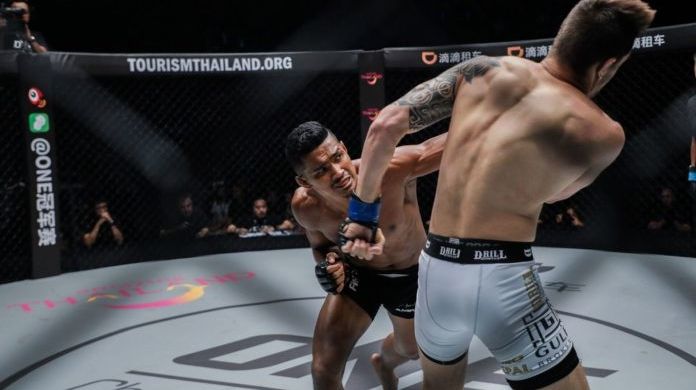 Courage is an amazing weapon to possess in your arsenal, especially if you are a mixed martial artist. Without the courage to face your biggest fears inside the cage, victory seems far away.

It’s the intangible characteristic of the greatest of warriors. When fear and defeat stare your right in the face, when you’re at your most vulnerable, courage can help propel you over the proverbial hurdle. It is courage that we discover within ourselves in our darkest moments.

Yet in order to wield courage, we must face our fears head-on. We must stare danger right between the eyes and say we will stand our ground and fight, and that we will never give up. It’s poetic, but it’s also real life. For in that cage, we discover just what we are capable of.

Over the years, there have been many instances where courage was represented at the highest level in the mixed martial arts cage. The sport’s greatest figures have all had their moments within the solace of the cold steel fences.

Let’s take a quick look at a handful of individuals who have displayed courage to the best of their abilities.

Today, Evolve Daily shares five of the most courageous mixed martial artists in the cage.

Reigning ONE Women’s Atomweight World Champion “Unstoppable” Angela Lee from the Evolve Fight Team has garnered many accolades throughout her young, four-year mixed martial arts career thus far. She has done so with tenacity and skill, toppling the majority of her foes inside the cage.

But she has also exhibited a lot of courage in her performances, particularly in a 2006 contest against Japan’s Mei Yamaguchi wherein Lee was forced to dig deep and battle adversity midway through the bout in order to pull out the win.

After getting dropped to the canvas care of a Yamaguchi right hook, Lee appeared to be defeated. But instead of folding, she retreated to her grappling prowess and took the bout over. Lee came away with a unanimous decision for her efforts and the inaugural atomweight world title.

It was an amazing display of courage, one that showcases Lee’s toughness and unwavering will to win.

There is no doubt Carlos Condit is one of the toughest men to have ever graced the UFC’s Octagon. The 35-year-old veteran has faced the biggest names in mixed martial arts and has reached the pinnacle of the sport with epic performances.

One common recurring theme in almost all of Condit’s fights is the way he comes into the cage like a rabid animal. To truly appreciate Condit’s fighting style is to look deep inside our own spirits and discover the primal instinct of human beings to survive.

Needless to say, Condit has always been exciting to watch his entire career. The man loves to stay in the pocket and trade, and the more he gets hit, the harder he comes back. That kind of courage is one in a million and Condit is truly a special fighter.

24-year-old ONE Superstar Amir Khan from the Evolve Fight Team is also another young fighter who has shown incredible courage in the cage. Competing amongst the best lightweight talents in Asia in ONE Championship, Khan was once referred to as the “perfect athlete” by his coaches.

He possesses incredible fight IQ, the physicality of a well-conditioned knockout machine, and the youthful energy and exuberance of an athlete just entering his prime.

In 2016 however, Khan was pushed to his absolute limit after grappling ace Vaughn Donayre caught him in a very deep Kimura. Any lesser man would have tapped, but Khan knew within himself that he had what it took to turn the tide and claim victory.

In a display of willpower and courage, Khan powered himself through physical pain to escape the hold and then proceeded to dominate an exhausted Donayre en route to his own submission finish.

He’s an action star in his own right, and former World Champion Anthony “Showtime” Pettis knows the secret ingredient to his unique approach to fighting is courage.

The 32-year-old from Milwaukee is one of the most creative offensive innovators in mixed martial arts. There’s not a technique that Pettis won’t try in the cage. To pull off the amazing things he does in the face of danger is truly awe-inspiring.

Here’s a man who has kicked off the cage fence and knocked somebody out. If that kind of flashy maneuver doesn’t spell fearless, nothing will. Pettis is and will forever be a bonafide action star.

Sure, he has the skills to finish any fight both on the feet or on the ground. But Pettis loves to put on a show for the fans and he always brings it. It takes true courage to step into the cage and fight, but Pettis has taken it up a notch with all the dazzling sequences he’s put together in his career.

Don’t let his “dad bod” fool you, UFC legend Roy Nelson is one of the toughest most courageous fighters in mixed martial arts history.

He may not have the six-pack abs, the bulging biceps, or the physique of a well-trained athlete, but Roy sure can fight. “Big Country”, as he is better known, has always equalized and leveled the playing field with his vaunted power.

In the most crucial of moments, it doesn’t matter how down Nelson is or how much punishment he has taken. He always stares fear in the eyes, and pushes forward and fights. His bouts against Fabricio Werdum, Junior Dos Santos, and Frank Mir are perfect examples. Nelson took incredible beatings from these guys but never backed down.

And of course, Nelson will always have his big right hand to bank on when the going gets rough. 15 of Nelson’s 23 career victories have come by knockout and fans love how he always brings it.