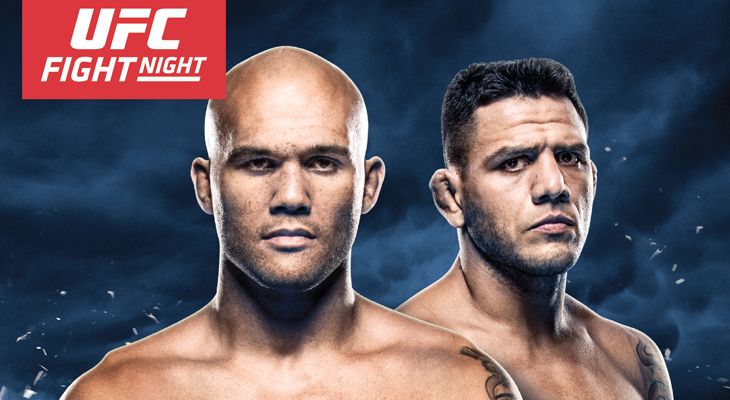 After re-emerging onto the scene as a welterweight earlier this year, Dos Anjos has taken down two big names in Tarec Saffiedine and Neil Magny. Now, the former lightweight titleholder has added the dangerous Lawler to his growing list of victims.

Featuring incredible cardiovascular strength and conditioning, stinging leg kicks, and a relentless attack, Dos Anjos completely trounced Lawler from start to finish, turning in perhaps his most complete performance yet.

At 33-years of age, Dos Anjos has found new life at welterweight and is making a legitimate case for a shot at Tyron Woodley for his coveted UFC welterweight belt with every performance. Lawler was certainly not an easy opponent by any means, and it took five full rounds for Dos Anjos to dominate the former champion, which makes the Brazilian’s victory even more impressive.

Dos Anjos has completed a comeback year with his best showing yet, garnering a shutout 50-45 score across the board for a unanimous decision win. How was Dos Anjos able to totally take apart the “Ruthless” one? Let’s take a look at five reasons why Rafael Dos Anjos dismantled Robbie Lawler.

Dos Anjos came into the bout against Lawler with a sound game plan which he executed to a tee. The Brazilian set the tone early, peppering Lawler’s lead leg with low kicks, preventing the former champion from really putting together his offense.

With each leg kick Dos Anjos landed, it slowly sapped the energy from Lawler, making every move he made painful and draining. It doesn’t matter how tough an opponent is, or how dangerous, no man can fight on just one leg, and Dos Anjos made sure to take Lawler’s feet from underneath him.

It was a very intelligent strategy from Dos Anjos, completely busting up that lead leg to the point that you could really see Lawler’s movement terribly hampered.

Aside from the focus on leg kicks, Dos Anjos showcased his incredible Muay Thai skills, putting in some great work in the clinch. Although Dos Anjos would find success early on from range, Lawler was able to close the distance on a few occasions. Given Dos Anjos’ robust clinch game, however, it just wasn’t Lawler’s night.

Dos Anjos controlled the clinch, landed a plethora of hard knees to Lawler’s midsection, while blasting him with elbows. In round two, Dos Anjos was able to trap Lawler against the cage and absolutely unloaded his offense. Being the tough guy that he is, however, Lawler was able to survive.

At that point, Lawler appeared to want to retaliate and mount a comeback, but the work Dos Anjos put in on Lawler’s leg was really slowing Lawler down. It was a truly masterful performance from Dos Anjos, who has honed his striking skills at to near-perfection.

In addition to his incredible offense, Dos Anjos also exhibited fluid defensive skills, showcasing impeccable head movement and great counterstrikes. It was extremely difficult for Lawler to figure out Dos Anjos’ timing, and as a result, Lawler never really found his groove for five whole rounds.

Not just head movement, but also general elusiveness from the Brazilian really confounded the usually-accurate and ultra-aggressive Lawler. Part of Dos Anjos’ game, however, has always been about being a complete fighter, and his championship pedigree certainly includes great defense as well.

Defense, of course, is equally as important as offense and Dos Anjos has made it very clear that part of his strategy against Lawler was to stay away from his opponent’s heavy hands. Although Dos Anjos was able to dismantle Lawler the entire bout, Lawler is always dangerous with the ability to turn the corner at any given moment.

Great head movement from Dos Anjos made sure the chances of that happening were minuscule.

Early analysis from onlookers that Dos Anjos would be too small to hang with the best guys at welterweight, or that he wouldn’t be able to sustain a consistent fast-pace for 25 minutes against bigger opponents turned out to be unfounded. Dos Anjos has proven to be more than just a blown-up lightweight. At this point, he’s a legitimate threat to the welterweight title.

Dos Anjos’ superior conditioning allowed him to maintain a brutal pace from beginning to end, even as he appeared to have emptied his gas tank in round two with Lawler pinned up against the fence. Dos Anjos never tired and remained strong until the final bell.

In round three, the Brazilian intelligently took matters to the mat with takedowns in order to pace himself, punishing Lawler with ground-and-pound featuring sharp elbows and downward strikes.

In the fourth and fifth rounds, also known as the “championship rounds”, Dos Anjos was still bursting with energy and knew he had more than enough to complete a masterpiece.

Dos Anjos has been in the game for a long time, and now, even at 33-years of age, he looks the best he has ever been.

A career resurgence, which involved a move to welterweight this year, has been rightly warranted. In the end, Dos Anjos turned in an amazing performance, doing exactly what he needed to do, stayed away from danger, and methodically picked Lawler apart.

Dos Anjos’ best moment, however, came in the second, when he stunned Lawler with a left hook and then unleashed a 25-second stream of his heaviest punches. Lawler survived the onslaught with a huge grin on his face, but it was clear Dos Anjos got the best of him in that exchange.

A man who has defeated the biggest names in the sport like Benson Henderson, Nate Diaz, Anthony Pettis and Donald Cerrone, Dos Anjos is a fighter through and through, and you just can’t keep him down. If there’s one lesson he has taught all of us this year, it’s that we should never underestimate the heart of a champion.