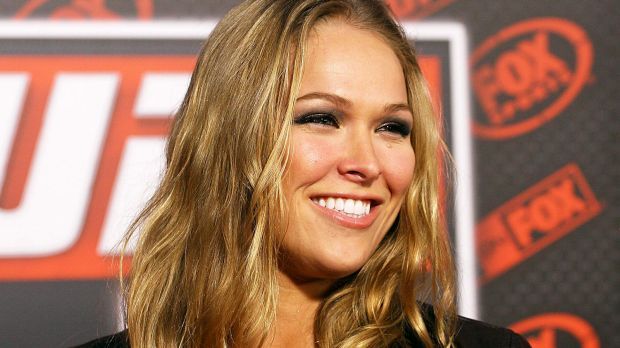 Of course it isn’t easy to date someone like Ronda Rousey. The ultimate alpha-female, Rousey is also the current UFC Women’s Bantamweight World Champion. She’s also known for her untarnished fight record, with a total ring time of 25 minutes and 36 seconds. Probably the most dominant female fighter of all time, it’s easy to see why most, if not all men, would be intimidated by such a powerful woman.

Known for her brash, no-nonsense, all-business attitude, Ronda Rousey puts her goals above everything else. Whether it’s retiring undefeated, becoming a bonafide Hollywood actress, or both, you should be ready to take the passenger’s seat in her list of priorities.

Feeling intimidated? Evolve Daily shares 7 Tips On How To Date An Alpha-Female Like Ronda Rousey:

1) Muster up some confidence It takes a lot of guts to date someone as talented and attractive as Ronda Rousey. It’s easy to imagine guys wanting to talk and get to know her. And what about the fact that she’s surrounded with men all the time: during training, press conferences, post-fight parties, there’s always someone who wants a piece of her.

A woman like Ronda wants a man who’s confident enough to be OK with these things. She wants him to be secure enough in himself to realize that all of that means nothing to her. If she decides she wants you in her life, there’s probably a good reason for that.

2) Develop a high tolerance for pain

Everyone knows about Joanna Jędrzejczyk’s knockout power and how much pain it can inflict on her opponents. We’re not saying she’s going to knock you out, but we can probably imagine her punching your arm jokingly every now and then.

Joanna’s been an athlete almost all her life. Heck, she’s a six-time world champion and four-time European champion in Muay Thai and holds a couple of MMA titles – she’s going to eventually hit you playfully and you’ve got to take it like a man.

3) Keep your ego in check There’s no use in challenging someone as talented as Michelle Waterson. She works hard at what she does and she’s good at it. She knows it and everyone else in the world does. So should you.

Although it may be tempting at times to air out your own achievements, with someone like Michelle Waterson, you might have to take the back seat every once in awhile. It’s not because you’re more inferior, it’s because you appreciate her hard work and all that it took to become successful. You need to become her biggest cheerleader!

4) Be ready for a challenge If it isn’t a challenge, Paige VanZant would most definitely not be interested. She doesn’t want someone who’ll just let her win all the time. She wants a man who’ll debate with her and question her decisions. She wants a man who wants to prove himself, who’s just as strong as she is but more restrained instead of impulsive.

There’s no doubt that Paige VanZant would prefer a man who isn’t a doormat. She wants someone to push her to be better than she is and challenge her thoughts and opinions. After all, doesn’t a little arguing kindle the fire just a little bit more? There’s no doubt that Miesha Tate will do anything to make her dreams a reality – and so should you. Miesha wants a man with ambition as strong as hers; someone who knows what he wants and will stop at nothing to achieve it.

A man who is career-focused won’t just sit back and watch Miesha pour her heart and soul into what she loves. He’s out there, doing the same thing and supporting her when she needs it. There is not a single woman out there who doesn’t love a man who can make her laugh. In between training sessions or during weight cuts, Rose Namajunas will probably need some cheering up. It’s tough being an MMA fighter, but it doesn’t have to be so serious all the time.

Although keeping it light is important, you should also know when to tone it down. When she tells you she needs her space (see #7), give it to her. Don’t forget, laughter is a surefire way to keep the relationship going!

7) Give her some space If you want to date Laila Ali, you have to know when to give her space. An athlete like Laila will need time alone every once in awhile to focus on her fights or work on her game plan.

Be courteous and give her the space she deserves. Know when to concede and when to discuss issues. Sometimes, some things are better left alone.

There’s no doubt that a woman like Ronda Rousey needs a man who is not only her partner, but her equal in all aspects of life as well. She needs someone who supports her passions and dreams but keeps her grounded by challenging her every once in awhile.

So tell us, do you have what it takes to date an alpha-female like Ronda Rousey?