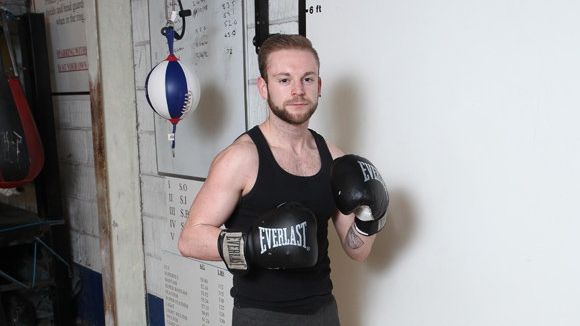 Walking into a boxing gym changed Michael Jephcott’s life. At that point, he had been overweight ever since he was a teenager. His fondness for potato chips and soda that gradually increased over the years was responsible for what eventually became a 44-inch waistline. Michael weighed over 115 kilograms at the time, and that led to some major health issues like depression, asthma, and panic attacks.

The combination of his poor physical condition and the health risks that came with it pushed Michael further into depression as he lost the desire to socialize with friends. He constantly felt ashamed about his weight.

“I was taking antidepressants because of my weight,” Michael explains. “My friends would all go on nights out and I never wanted to go because I felt ashamed in my own body. I would never eat vegetables and I used to drink four or five cans of pop a day as well. One day, something just clicked and I knew I had to change my habits.”

Michael finally had enough of being out of shape, and he vowed to take better care of himself. He started off working out by himself, then his brother suggested giving boxing a try. Pretty good advice from his brother considering the fact people who train martial arts like boxing burn more calories per hour than you would burn during other exercises like running or lifting weights. They are also less likely to give up on their fitness routine since each training session is unique in its own way, while other activities can feel rather repetitive after a few workouts.

Michael lost 25 kilograms within the first few months of him signing up for a boxing class at the boxing gym, and, even better, it helped him regain his confidence and awoke his competitive juices — another benefit that often comes with martial arts training. As you begin to accomplish small goals and improve as a practitioner of that style, your confidence naturally grows. It’s hard to not feel great about yourself when you find yourself doing things you once doubted your ability to do. Regular trips to the boxing gym helped Michael get in the best shape of his life. (Image via SWNS)

Michael decided to give amateur boxing a shot, and he worked towards losing more weight so that he could drop down to his competition weight of 57 kilograms. He defeated everyone he faced during his first amateur tournament, winning the Amateur Boxing Association (ABA) Novice championship belt. Michael went on to compete as an amateur boxer for over three years.

“I made my ring debut and from there on I managed to work my way up to a pretty decent standard,” Michael says. “I became the ABA Novice champion after winning on points by a unanimous decision and that was a proud moment. It showed how far I had come. The fat teenager in me would never have dreamed I would have ever become a boxing champion.”

As amazing as Michael’s story is, it isn’t uncommon to see people who pick up martial arts training transform their lives. Here at Evolve MMA in Singapore, we also have many students who have dealt with serious issues like body image problems and obesity who have transformed their lives. Some are even professional fighters now.

You can call it the martial arts effect.

When you train martial arts, you learn many new things that are beneficial to you in all facets of your life. You learn self-defense skills, self-discipline, improve your confidence levels, learn to persevere, burn lots of fat, and you improve your analytical skills. These are all things that will help you in your personal and professional life. Your improved confidence will have you setting goals that you wouldn’t have dared set before you started training.

Boxing is now an integral part of Michael’s life, and he’s been able to remain lean over the years. Now 28, he married, works as a quality inspector, and he teaches boxing fitness during his spare time.

“I now eat five or six times a day to keep my metabolism levels high,” Michael adds. “I only eat carbohydrates earlier in the day and I go to the gym three times a week. But I make sure I allow myself to have one cheat day a week. Boxing has changed my life loads – not just with my body and the weight loss, but also having more confidence in myself. I would never have taught a class a few years ago. I am passionate about motivating others, as a lot of people think that if they are big, they will never be slim or in shape. One woman who comes to my boxercise class has lost four stone (25 kilos). It’s so rewarding when you see their confidence building.”

A proper workout routine coupled with a balanced diet is essential for significant weight loss and that fact isn’t lost on Michael.

“I would say about 80 percent is down to what you eat,” Michael says. “Don’t call it a ‘diet’ though because that’s off-putting. It’s a lifestyle change.”

If you’re suffering from obesity and the host of issues that come with it like low self-esteem, depression, and anxiety, signing up for a boxing class is a good way to get back on track. Unlike other activities like running and swimming that can become boring and repetitive really quickly, martial arts classes are always something to look forward to. There are always new counters, drills, and warmups to learn.

When you sign up for a boxing class, you also get to interact with like-minded people who share your passion for martial arts and fitness. Your training partners will serve as a support system that is always there to give you encouragement when you need it, and your improved confidence will empower you to take on challenges you would have shied away from in the past.

What are you waiting for? For all those in Singapore, schedule a complimentary introductory trial class and start reaping the rewards of training martial arts!

This story was originally featured on www.mirror.co.uk and www.dailystar.co.uk.