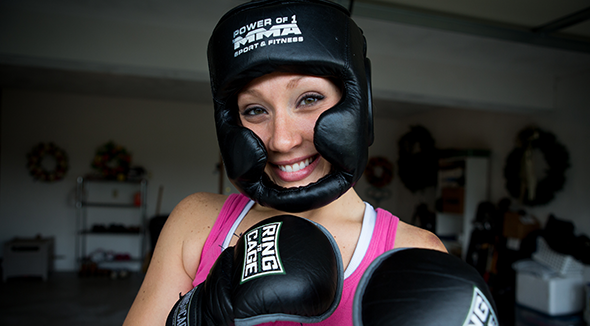 Kate Riley spent over 20 years of her life being overweight. She had convinced herself that she would be overweight and unattractive for the rest of her life and she had accepted her fate. She created so many mental barriers within herself that whenever she finally mustered up the courage to do something about her weight, the negative voices inside her head would start chipping away at her confidence and get her to quit before she even started.

Kate’s obesity problem started early in life. She started gaining more weight than all the other kids when she was five, and that continued until her college years. Like most overweight children, she had to endure lots of teasing and bullying growing up.

That only made her problem worse as she turned to food for comfort. She knew all the junk food she was stuffing herself with was bad for her health, but it felt good to her at the time.

Kate managed to sum up enough courage to deal with her weight issues during her final years of high school. She even managed to lose about 80 pounds following a fad diet. Of course, she was miserable while doing so and her hair was falling out because she was malnourished. By the time Kate went off to college, she had had enough of the diet and went back to her old eating habits.

It’s a story that we hear all too often from people who try to lose weight by focusing on their diet alone. Dieting is an important part of keeping your body healthy, but it needs to be balanced with an exercise program for best results. For example, a one-hour Muay Thai class burns up to 1,000 calories, so you won’t have to be as restrictive with your diet since you are already burning off a decent amount of your daily caloric intake every time your train.

Gaining lots of weight didn’t make Kate’s college experience any better than it did during her childhood years. It made her reluctant to socialize with her peers as it left her feeling like the odd one out.

By the time Kate graduated with her masters, she weighed over 120 kilograms. Tired of not being to live a normal life because of her weight, she finally reached a breaking point.

“I don’t know if it was a specific moment. All I knew was I was very unhappy,” Kate added. “I had been diagnosed with an anxiety disorder my senior year of college, and I had missed out on most of my college years because I was too afraid to leave my dorm, make new friends or try new things. I would go to class, then go right back to my room.”

Kate discovered martial arts shortly after. She quickly realized martial arts training was one of the most effective ways to lose weight and get in shape, but there were times she wondered if she was in over her head.

“At the age of 23, my knees hurt, I was out of breath from just walking and I had asthma,” Kate explained. “I had never run even half a mile in my life, and one of my goals was to run a 5K. When I started MMA, I could barely even make it through 15 seconds of a two-minute round, but I kept telling myself to do a little bit more each time. One of the most difficult times for me was when my husband’s work schedule changed and he could no longer come to class with me. I was terrified and almost quit.”

What kept Kate going was her ability to persevere. A core martial arts value that students learn early in their training. No one walks into a martial arts gym and starts executing black-belt level techniques their first day of training. Everyone starts from the bottom and gradually improves over time.

With every extra second spent on the mat and every technique mastered, Kate’s confidence began to grow. The fact she had lots of other similarly-minded people who were always there to motivate and cheer her on also helped.

Kate has developed a passion for martial arts. (Image via Karen Pearson)

That’s another important benefit of martial arts training that is often overlooked. It is really one of the best ways to meet new people. That might not seem like a big issue when you are younger and have lots of friends in school, but as you grow older and pick up more responsibilities, you might find yourself in a new city or country.

“The people at the school were great to me, and I always found someone to work with who encouraged me to keep coming back,” Kate says. “As my journey went on the obstacles went away, but new ones always arose. I just learned how to manage them better.”

Kate wasn’t even dieting when she started training martial arts. She had never exercised regularly throughout her life, and the weight started coming off. She eventually added a healthy diet to her weight loss program. A few years later, she’s down to 70 kilos, having lost a whopping 50 kilos!

Kate’s passion for martial arts eventually led her to mixed martial arts. She started off with a kickboxing match, then she moved on to MMA, winning her first fight.

The girl that weighed 110 kilos in college has certainly come a long way.

This could be your story as well. Book a complimentary trial class today and discuss your weight loss goals with our staff and World Champions!

This story was originally featured on www.livestrong.com and www.huffingtonpost.com.