Looks, intelligence, and talent – these are all traits that could be passed on from generation to generation. But what about the trait that involves passion for martial arts? There’s certainly a fighting gene that runs in the family of some of the greatest martial artists, including the Klitschko brothers, the Payakaroon brothers, the Ribeiro brothers, the Mendes brothers – the list goes on. For these brothers, martial arts is definitely in their blood. For Jonathan (28) and Jason (30) See, two brothers who started training Muay Thai in 2008, having a shared passion for the art of 8 limbs has certainly strengthened their brotherly bond.

It was the TV show The Contender Asia that drew both brothers to Muay Thai. “It was so graceful and technical,” said Jonathan. “The fighters in the show proved that size didn’t matter.” The style of multiple-time Muay Thai World Champion and the winner of the show, Yodsanklai Fairtex, was what appealed to both brothers the most. “Watching Yodsanklai inspired me to try Muay Thai for myself,” says Jason. 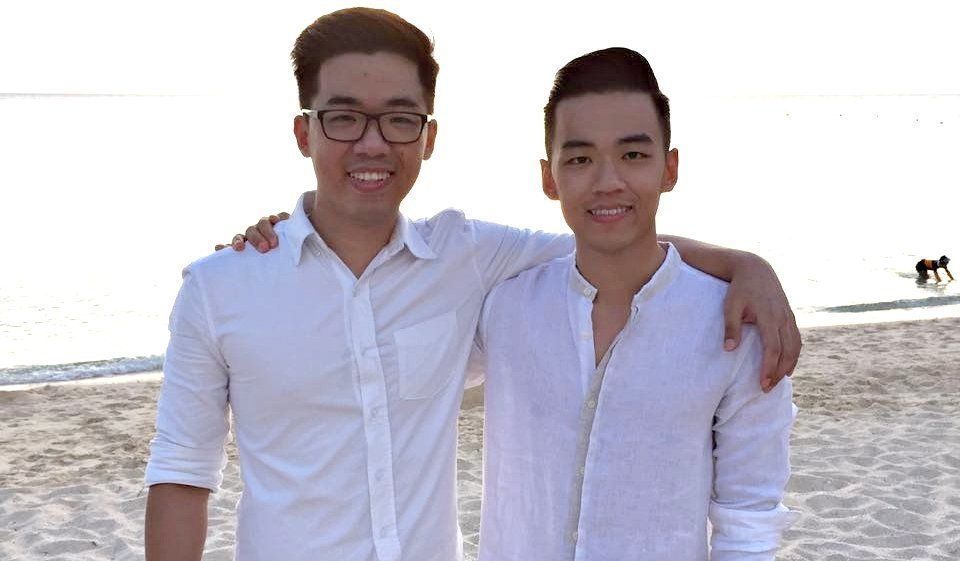 Jason and Jonathan believe that Muay Thai brought them closer together.

Before starting Muay Thai, Jonathan considered himself to be quite timid. He believes that this was caused by a minor heart condition that he was diagnosed with at birth. “I wasn’t allowed to take part in PE/Sports all the way up till I was 10 years old,” shares Jonathan. “And because of that, I had issues with my weight going into my teens.” Watching The Contender changed his whole perception about martial arts, especially when he would see the fighters get into the ring. “It blew my mind that there would be people brave enough to get into a ring and square off against someone else – and to do it skillfully too. It made me want to test myself and pursue martial arts,” said Jonathan.

After finally making their TV dreams a reality, both Jonathan and Jason have trained Muay Thai consistently for 8 years. As they had predicted, their first class was indeed exhausting but not enough to dissuade them from continuing to train. And they don’t see themselves stopping anytime soon. In fact, they have only seen positive results both in their physical and mental well-being. “I’ve lost weight, and it has greatly improved my health,” reveals Jason, “It’s also taught me discipline and a learning attitude.” Jonathan on the other hand has seen a change in the way he’s learned to control his emotions, giving him a more positive outlook on life. And the changes in the brothers are more than evident to those closest to them. “Everyone’s very supportive,” says Jonathan, “They saw how much stronger I was mentally and physically.” Jason has been training Muay Thai since 2008.

But perhaps the biggest benefit for both brothers is the closeness that a love for Muay Thai helped nourish. “Muay Thai was one of the first things we had a genuine, common interest in,” says Jonathan. “It was definitely the first thing we picked up together. I think getting into it together opened up a lot of opportunities for us to build our relationship further.” Jason wholeheartedly agrees. “Having this common passion brought us closer together through helping each other improve, training together, and talking about Muay Thai and the fight scene,” Jason shares.

Although Jonathan and Jason have sparred countless times, being brothers has done nothing but reinforce their training goals. “When we spar, we have the assurance that we genuinely want to help each other improve, so sparring is always controlled and helpful,” says Jason. Jonathan, being the younger brother, was intimidated at first when he was told he had to spar Jason. “We got carried away the first few times we went at it,” says Jonathan. “But after we matured together as individuals and martial artists, it taught us to control our emotions and thoughts and helped one another progress.” The two brothers have grown undoubtedly close over the years and it is Muay Thai that they consider to be their true bonding time. Jason’s wife has started training Muay Thai as well, and Jason feels truly blessed that he can do Muay Thai with those that are closest to him. “It makes it easier to balance work, family, and training because we can spend time together at the gym. Although it’s a tiring workout, it’s always fulfilling to do what I love with the people that I love,” Jason shares.

Despite Muay Thai being a combat sport as opposed to a team sport, Jonathan and Jason have undoubtedly managed to use the art as a means to take their relationship to the next level. Although they playfully joke about who is better at Muay Thai or have disagreements about certain fighters and fights, both brothers consider this to be one of the best parts of having a brother who shares the same interests. Through Muay Thai, Jonathan and Jason have forged an unbreakable bond that goes beyond being just brothers.