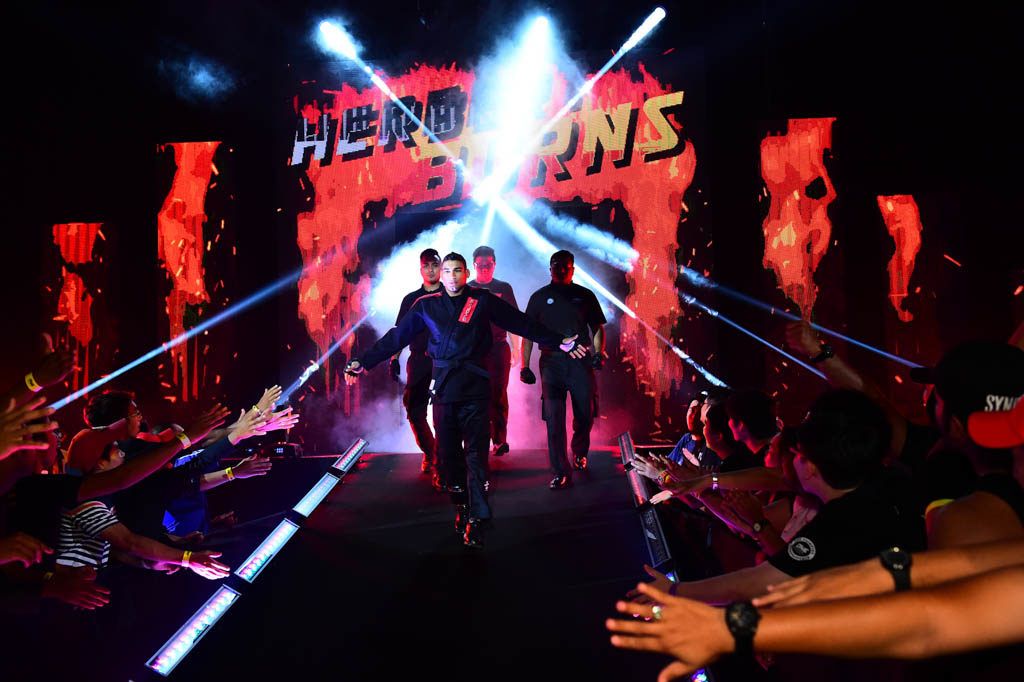 They don’t call him “The Blaze” for nothing. Evolve Fight Team member and Brazilian Jiu-Jitsu (BJJ) World Champion Herbert “The Blaze” Mitchell Burns is capable of submitting his opponents with blazing speed and precision, torching the competition in a little over a minute or less.

Born and raised in Niteroi, Brazil, Herbert started Brazilian Jiu-Jitsu at 10 years old. A month after his first lesson, he competed and won in a National Competition. Since then, Herbert has competed and won in many Brazilian Jiu-Jitsu tournaments across Brazil and around the world. In 2012, Herbert decided to try his luck at Mixed Martial Arts, winning his first fight in 25 seconds. As an instructor at Evolve MMA, Herbert shares his uniquely fluid Brazilian Jiu-Jitsu techniques. He believes in movement and flow, as well as finding and creating spaces in order to get submissions.

Today, Herbert gives Evolve Daily the inside scoop on his innate ability to submit his opponents at will through an in-depth analysis of some of his fastest MMA and BJJ matches to date.

Whenever I see an exposed back, my instinct is to immediately sink my hooks in and go for a submission,” Herbert says.

In this match, Herbert is able to grab Edward’s left leg for a single leg takedown. He reaches for the other leg to switch to the double, while Edward tries to scramble back onto his feet. Unfortunately for him, Herbert’s reflexes proved to be too fast. Herbert immediately took advantage of Edward’s exposed back, putting in his hooks in and going in for the rear naked choke.

As soon as both fighters touch gloves, Herbert goes for the takedown and gets it. While in the mount position, Herbert utilizes his striking techniques, giving Saulo several blows to the head. He moves into a higher mount and is able to secure the triangle, giving him more leverage to land more punches. He isolates an arm and swiftly switches to an armbar.

I always try to control the fight from the beginning,” explains Herbert, “Sometimes, my opponents get overwhelmed by this tactic so I just take advantage of the situation and go for it.”

After a successful takedown attempt, Bruninho looked like he was in control of the match. Unfortunately for him, Herbert was able to successfully recover his guard, pulling Bruninho into a triangle.  Bruninho tried to get on his knees and regain control, but Herbert’s omoplata attempt enabled him to land a submission. Herbert grabbed Bruninho’s free arm and finished the fight with a kimura.

Herbert’s quick guard recovery showed an unfortunate reversal of roles for Bruninho. This match is a good example of Herbert’s versatility as both a guard and top game player.

I always try to be offensive from any situation,” reveals Herbert.

My favorite submissions are the choke from the back and triangle. I believe in having good back control because it makes it easier to transition into submissions.”

This can be seen in his match with Leandro Ratinho, whom Herbert fought twice.

As soon as he got the takedown, Herbert kept putting pressure on his opponent, passing the guard in a swift motion. As soon as Leandro tried to get on his knees, he exposed his back, giving Herbert his favorite position. As usual, Herbert took advantage and submitted him via rear naked choke.

Herbert’s ability to take advantage of any situation shines through in his MMA and BJJ matches. The fluidity of his Brazilian Jiu-Jitsu techniques is simply amazing to watch. He is quick to impose his game, shutting down any possibility for his opponents to recover. We can’t wait to see what else he’s got in store for us!