Gennady Golovkin is upset, and he has every right to be. He just lost the very first professional bout of his career, had his previously unblemished record stained, and surrendered the WBA, WBC and lineal middleweight titles to rival Canelo Alvarez.

The highly-anticipated rematch, which took place Saturday night, 15 September at the T-Mobile Arena in Las Vegas, Nevada, USA was incredibly close, with judges turning in scores of 114-114, 115-113 and 115-113, effectively giving Alvarez a razor-thin 12-round Majority Decision (MD) victory.

Golovkin stormed out of the ring as soon as the decision was read, obviously unhappy with the way things played out. He uncharacteristically declined to do the post-fight interview with Max Kellerman, as has been the tradition. Golovkin, along with many fans and even boxing experts, thought he had done enough to eke out the win on the scorecards.

He has every right to be upset about losing this fight. But he can, in no way whatsoever, call it a robbery. In fact, this fight, as close as it was, could have gone either way. It just so happens that this time, Alvarez was able to put himself on the right side of the scorecards.

We understand why people are angry and upset. A lot of fans thought Golovkin won, and that’s totally fine. But to call this decision a robbery is a disservice to how hard these two fighters prepared and fought for this. Alvarez, in particular, could have possibly scored the biggest win of his career.

Want to know why this fight turned out the way it did? Today, Evolve Daily shares four reasons why Canelo Alvarez vs Gennady Golovkin 2 wasn’t the robbery you thought it was.

As much as he was criticized for not staying true to his roots and fighting like a typical Mexican in the first bout, Canelo Alvarez fought like a true Mexican warrior in the rematch. That’s for sure.

Alvarez came out of the gates firing on all cylinders, keeping the pressure on Golovkin for the majority of the early rounds — a huge difference from the first fight when he chose to employ a more conservative attack. This time around, Canelo was firing combinations from the hip, and for the first time ever, we saw Golovkin backing up in a fight.

In fact, it was Alvarez’s early work, taking the majority of the first few rounds on the scorecards, that ultimately led to his victory. Alvarez won enough of the early rounds in the eyes of the judges to sway the decision in his favor when it was all said and done.

Golovkin turned it on in the middle to late rounds, but the work Alvarez put in early paid dividends when the scorecards were read.

2) It was volume punching versus clean punching 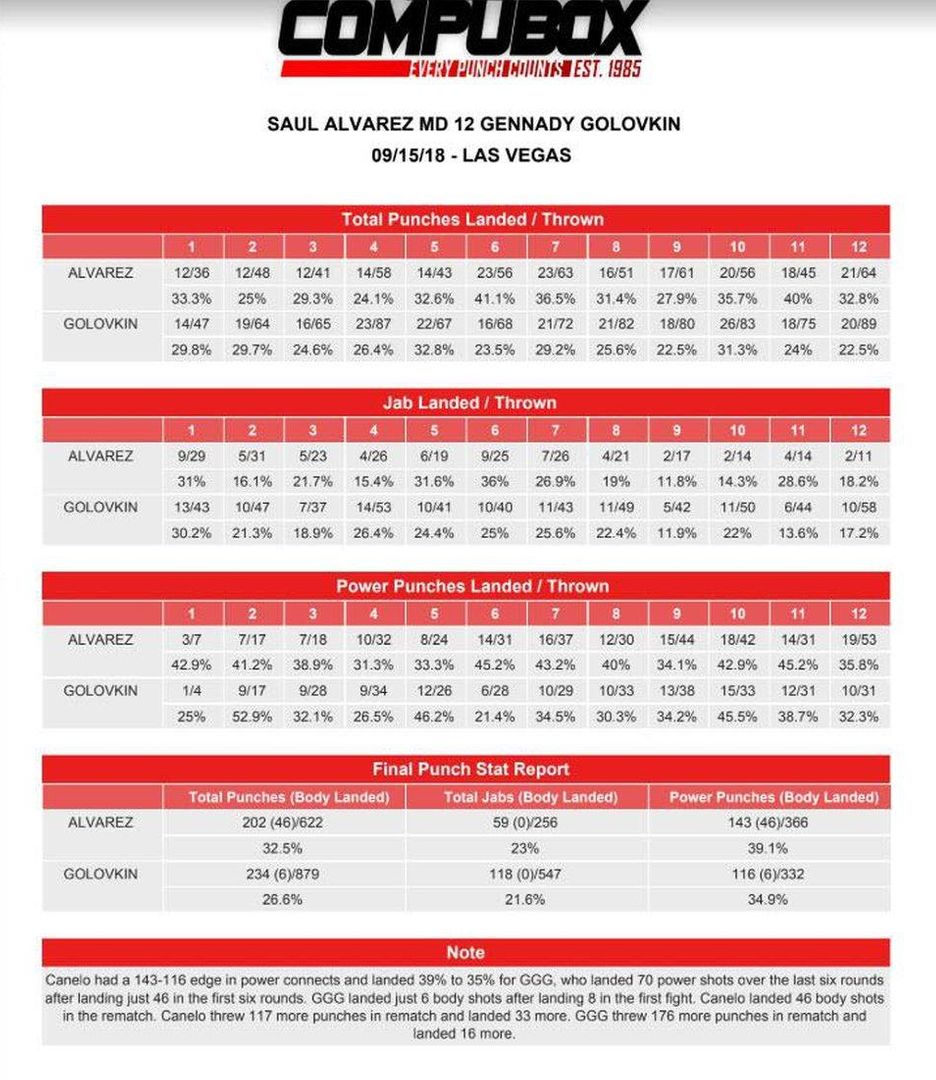 A recurring theme in both fights was Golovkin’s punch output. Golovkin certainly out threw Alvarez by a hefty margin.

According to CompuBox’s official punch statistics, Golovkin landed 234 out of 879 punches and began to overwhelm Alvarez from the 6th round onwards. But Alvarez landed at a much higher percentage, connecting on 202 punches out of a fewer 622 attempts.

This means Alvarez landed more clean punches, and the judges may have also believed him to be the harder puncher.

In addition, Alvarez made it a point to go to the body more in this fight as compared to the first time they tangoed. The punishment to the body took its toll on Golovkin late, as it slowed him down considerably, evident in the lack of speed and pop in Golovkin’s punches.

But the story of the night for Alvarez was the straight right hand, which connected on Golovkin flush on multiple occasions. By the middle of the bout, Golovkin’s cheekbones were a shade of black and blue. Abel Sanchez, Golovkin’s head trainer, wanted his ward to go for the finish as early as the 10th round, sensing Alvarez was beginning to fade, while Eddy Reynoso, Alvarez’s coach urged his fighter to fight smart.

At one point, Reynoso was even heard saying to Alvarez “You can’t knock him out”, noticing his charge trying too hard to land a big punch. Instead, Reynoso wanted Alvarez to focus on trying to outbox Golovkin, which turned out to be a good decision.

How the judges got to this point was also interesting as they had taken different routes. Judges Dave Moretti, Glenn Feldman, and Steve Weisfeld all had differing scorecards up to the 11th round, an indication of how inexplicably close some of the rounds were.

Almost anticlimactically, after 11 close rounds between them, this amazing fight would be decided in the 12th and final round.

4) The 12th round was the difference maker

Knowing what we know now, and having a peek at the official scorecards, this fight was decided in the 12th round. Up to this point, Golovkin had turned the tide in his favor, having won the last two rounds on all three of the judges’ scorecards. Alvarez knew he had to do everything in his power to win the final round.

Immediately at the sound of the bell, Golovkin came out firing a furious combination, stopping Alvarez in his tracks with a powerful right hand. But the Mexican warrior would shake it off and fire back rapidly with his own offense, and the two proceeded to slug it out at the center of the ring.

Alvarez, intelligently realizing that the fight was too close for him not to lay it all out on the line in the final three minutes, took the action right to Golovkin’s grill, who seemed to fade in the second half of the round. Alvarez kept the pressure on until the final bell.

In the end, judges Moretti and Weisfeld gave Alvarez the 12th round, and that proved to be the difference maker resulting in Alvarez taking home a closely-contested Majority Decision. Judge Feldman gave the 12th to Golovkin, resulting in the 114-114 draw on his scorecard.

Had Golovkin won the 12th round convincingly, we would be looking at a draw all across the board.

Despite Alvarez’s victory, however, one thing is for certain. A third and final fight is warranted and necessary. Luckily, both men seem to be agreeable to it. Fans certainly would not mind these two men going at it again.