So you’ve been training regularly for quite some time, and you’ve always wondered if competition was ever in the cards for you. Maybe your goal as a martial artist isn’t to become a decorated World Champion or maybe it is – whatever your goal is, it’s 100% OK to choose not to compete. But do you really want to go through the rest of your martial arts journey wondering what if?

If you truly want to test yourself and see if you have what it takes to be a competitor, perhaps you should consider being a part of the Evolve Competition Team. The next round of tryouts are on August 26-27! Still not convinced?

Here’s Why It’s Time For You To Try Out For The Evolve Competition Team:

1) Because you want to take your skills to greater heights

When you compete, you’ll be motivated to put in the extra time before or after your regular training sessions to fix all the holes in your game. In regular training, it’s easy to avoid using the techniques and positions you don’t like. Unfortunately, this attitude won’t help you improve.

In the end, if we take too many shortcuts, we leave gaping holes in our games, which holds us back from becoming the well-rounded martial artists we ought to be. When you prepare for competition, you’ll be forced to work on both your strengths and weaknesses, leaving very little room for slacking. This will undoubtedly make you a better martial artist, regardless of the outcome of the competition.

2) So that you can become accountable for your actions Muay Thai is also known as “The Art Of Eight Limbs”.

As non-competitors, we often disregard the importance of what goes on when we step out of the gym. Whether it’s our nutrition, the amount of sleep that we get, recovery – everything goes out of the window eventually. And that’s normal. Since we aren’t expected to perform at the best of our abilities, we easily give into temptation, which eventually could become detrimental to our martial arts journey.

When you add in the looming reality of competition, suddenly, the stakes are higher. You have a lot more to lose from that indulgent meal you just had after training. It eventually becomes easier to turn down that plate of french fries or that pint of beer. Remember, what you do outside of training counts. If competition drives you to be healthier, wouldn’t that be a good thing?

3) Because it’s a true test of your skills

So you’ve sparred a countless number of times, drilled for hours, filled your class card, worked on your strength and endurance – why not put all these to the test? Although many will argue that sparring is just as good, competing is on a whole other level.

In a competition, you’ll test your technique and athletic ability against people you’ve never sparred against. They may have styles or games that you may never have been exposed to in regular training, which will certainly challenge you. It will also test your mental strength, forcing you to push through a tough match or two.

Ever wonder if you’re good enough to be ranked among the very best in your martial art of choice? Imagine what would happen if you trained like a competitor and pushed yourself to your limits – would you be a better martial artist? As we all know, nothing great ever happens inside our comfort zone. It’s only when we take risks that we realize our true potential.

5) Because it feels great to have your hand held up in victory! The concept of leverage allows a smaller, weaker individual to subdue a bigger, stronger opponent.

Nothing beats the satisfaction of having your hand raised in victory. Knowing that you’ve put in all the work, preparation, and tried to get over those pre-competition jitters to help you reach your ultimate goal is something that not every martial artist can achieve. You’ve put in the time and effort into training – why not take recognition and appreciation for all that you’ve done?

There’s no doubt that joining your gym’s competition team is one of the most empowering things you could do as a martial artist. Competition not only opens your eyes to your true potential but it also inspires you to try your very best in everything that you do. So why not take that leap and take your martial arts journey to greater heights? Try out for the Evolve Competition Team on August 26-27 and see if you have what it takes to be a competitor! Sign up at the front desk of any Evolve location today! 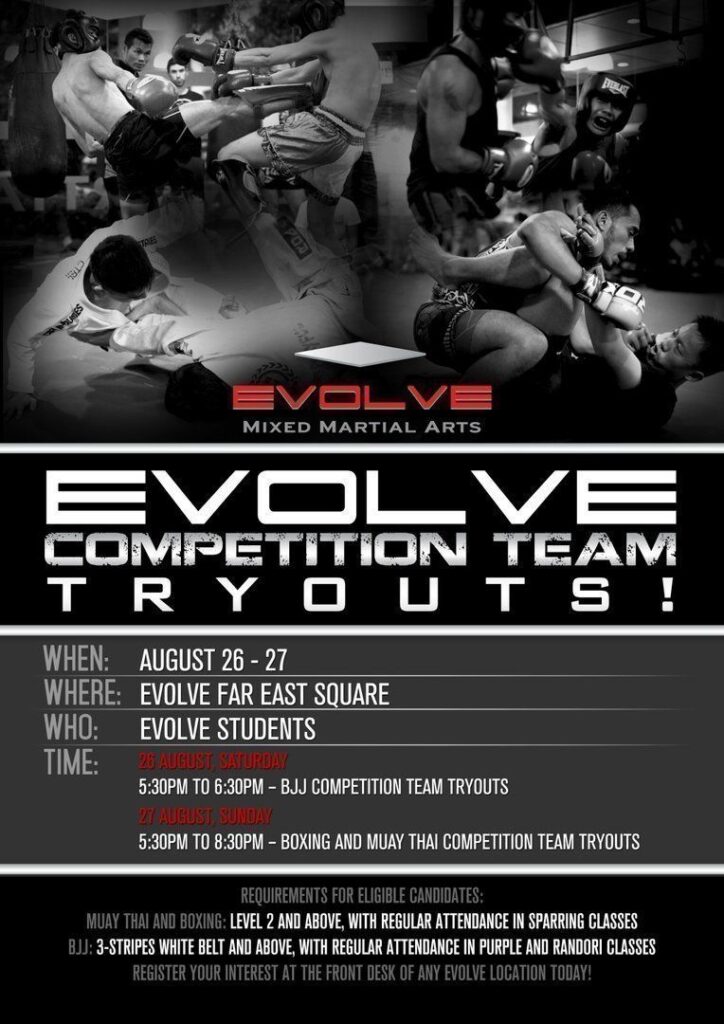