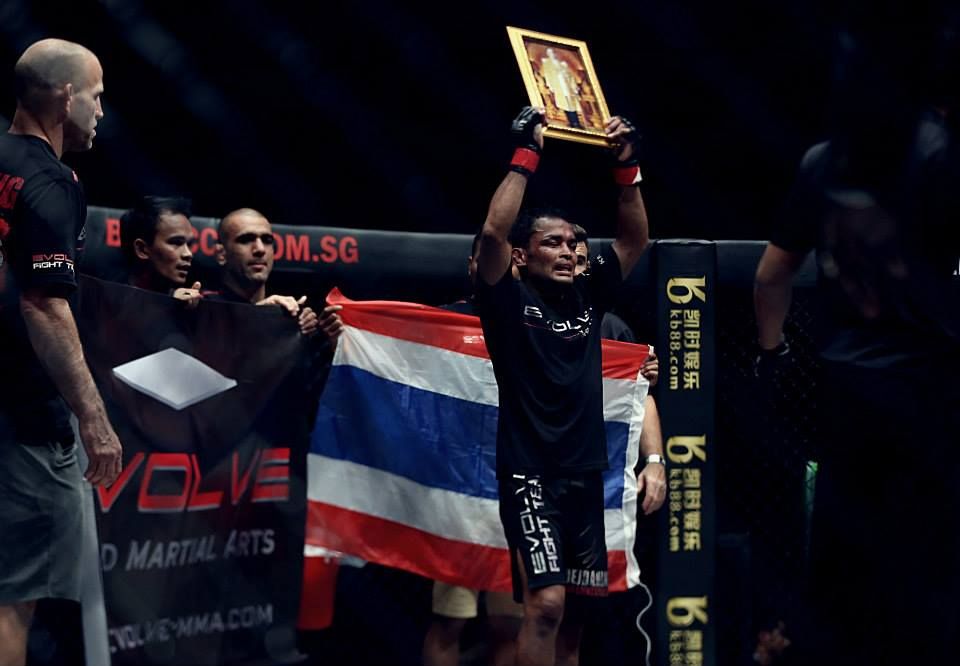 History was made at ONE Championship: Warrior’s Quest as Evolve Fight Team’s Dejdamrong Sor Amnuaysirichoke defeated his toughest opponent yet in the form of former WBO title contender Roy Doliguez to become the first Thai to win a world title in Mixed Martial Arts.

The fans in attendance at the Singapore Indoor Stadium and the millions watching worldwide were most definitely getting their money’s worth in what was certainly the fight of the night. And Dejdamrong could not have asked for a better way to become the first Lumpinee Muay Thai World Champion to capture a world championship title in a major global MMA organization. Although this was his toughest fight yet, the three-time Lumpinee Muay Thai World Champion showed just how much of a well-rounded mixed martial artist he has become as he outperformed the more experienced Doliguez both on the feet and on the ground.

Coming into the fight, both fighters possessed high-caliber credentials in the striking department but Dejdamrong’s Muay Thai was evidently too much for Doliguez, forcing the former boxing champion to shoot for takedowns and attempt to bring the fight to the ground instead. However, Dejdamrong was able to turn most of his opponent’s takedown attempts in his favor, controlling most of the action on the ground and piling up a significant amount of damage on Doliguez whenever he could.

It was only a matter of time before Dejdamrong’s onslaught of knees, kicks, elbows and punches would prove too much for his opponent, and in the fifth round, Doliguez was deemed unable to continue. The fight then went to the judges’ scorecards and all three judges scored it unanimously for Dejdamrong, crowning him ONE Championship’s first 115-pound champion.

Dejdamrong has been making huge waves ever since he stepped into the world as MMA. Making history as the first Lumpinee Muay Thai World Champion to ever compete in MMA, he impressed fans around the world by dominating in his first four fights.

Now, after scoring the biggest victory of his young MMA career, Dejdamrong once again makes history as the first Thai fighter to become an MMA world champion, a feat that undoubtedly launches him to legendary status. And though Dejdamrong is just five fights into his MMA career, there is no questioning how much of natural he is at MMA. The 36-year old ONE Championship Strawweight Champion’s performance against Doliguez reflected his comfort level in the cage as he fought like a seasoned MMA veteran. And Dejdamrong will no doubt continue grow and improve as he continues to train alongside the many World Champions of the prestigious Evolve Fight Team.

The Evolve Family would like to extend our sincerest congratulations to Dejdamrong Sor Amnuaysirichoke for his historical win at ONE Championship: Warrior’s Quest. He is truly an inspiration and role model to us all and we look forward to seeing him fight in the ONE cage again as the first ever ONE Championship Strawweight Champion!

Without question, Kickboxing World Champion Giorgio “The Doctor” Petrosyan from the Evolve Fight Team is one of the greatest kickboxers in history. His career spans 16 years, and his overall record of 101-2 is one…

Two-time ONE Lightweight World Champion Shinya “Tobikan Judan” Aoki from the Evolve Fight Team is one of the most dangerous mat tacticians of all time. But if you had to describe Aoki’s professional mixed martial…