How To Be An Awesome White Belt So, you’ve decided to start Brazilian Jiu-Jitsu (BJJ). Firstly, we’d like to wish you congratulations on making the best decision of your life! For someone who’s never grappled before, well, you’ve picked a martial art that you can practice for years and years to come. In fact, BJJ forefather Helio Gracie was known to spar with his training partners well into his 90’s. If that isn’t enough to convince you that you’ve made the right decision, we don’t know what else is.

The more you continue to train, the more you realize how complex BJJ is. We’re not going to lie to you – there are hundreds of BJJ techniques out there, and hundreds of variations of those techniques. So if you think you don’t know enough – well, not even that guy with that cool looking purple belt around his waist does. Don’t worry; every black belt was once a white belt. Everyone’s felt lost at one point or another when they started BJJ, so you’re definitely not alone. Because we know exactly how you feel and want to help you get more comfortable, we’ve come up with a rough guide on how to navigate your BJJ journey better.

Read on and learn how you can become an awesome white belt: Think you aren’t good enough to step onto the mats? If you didn’t already know, it takes 10 years for the average BJJ student to become a black belt. And even black belts have their bad days. Just because you can’t get a technique down or keep on getting submitted doesn’t mean you’re never going to get it right one day. Everything takes time, especially BJJ. There’s a lot to learn and a lot of movements you need to get used to. Take it one step at a time and just focus on your journey. You’ll eventually fix those wonky techniques and get those movements down pat. All it takes is time and the determination to get better!

2) Don’t be afraid to ask questions It takes around 10 years for a BJJ student to receive his/her black belt.

Even if your instructor is a multiple-time BJJ World Champion with countless fights under his belt, don’t be intimidated to ask even the most basic question. He’s there to help you and guide you through your BJJ journey. He understands that not everyone learns at the same pace and the same way. If you don’t understand a technique, please ask your instructor. He’ll be there to make sure you understand it and get it right the next time.

3) Don’t be afraid of higher belts Nothing beats the endorphins you get from a BJJ class!

Believe it or not, the higher belt was in your shoes once before. He/she knows exactly what it’s like to start BJJ and feel completely clueless. If you’re looking for a partner for drill time, don’t hesitate to approach a higher belt. Chances are, they’re more than willing to help you out!

4) Don’t be picky with choosing partners BJJ was designed to empower the smaller, weaker individual, emphasizing on using technique rather than strength. Because of this, you’ll realize that different techniques work on different people. If you see someone twice your size, someone smaller than you, or even someone of a different belt level, don’t hesitate to partner up. The more diverse your selection of training partners is, the more well-rounded your game will become. Trust us!

5) Don’t be afraid of expanding your knowledge

If there’s a technique you’re interested in, do some research! Remember all those times you had to look up something you didn’t understand in school? It applies in BJJ too. After you’ve consulted with your instructor, you can research the move you’re having trouble with. There are plenty of instructional videos out there to help you out.

6) Don’t be too hard on yourself Each stripe on your belt brings you one step closer to receiving your black belt.

Everybody, yes, even BJJ black belts, is capable of making a mistake. Not every technique will come to you easily, and it’s natural to try it several times before getting it right. Don’t be too hard on yourself if you can’t get a technique down perfectly. That’s why you’re a white belt, you’ve just begun your journey and you’re allowed to make mistakes. Just make sure you fix those mistakes before they turn into bad habits.

7) Don’t do the warm-ups half-heartedly Air squats are great for working on your quads and glutes.

Regardless of what you may believe, your instructor isn’t making you do warm-ups because he wants to torture you. Warm-ups help you get used to the movements you’ll be using in BJJ and also prepare you for the training session coming up ahead. And if you think your instructor won’t notice if you miss a few sit-ups here and there, think again. Even if he doesn’t call you out, he’s probably watching your every move!

8) Don’t be inconsistent with your training 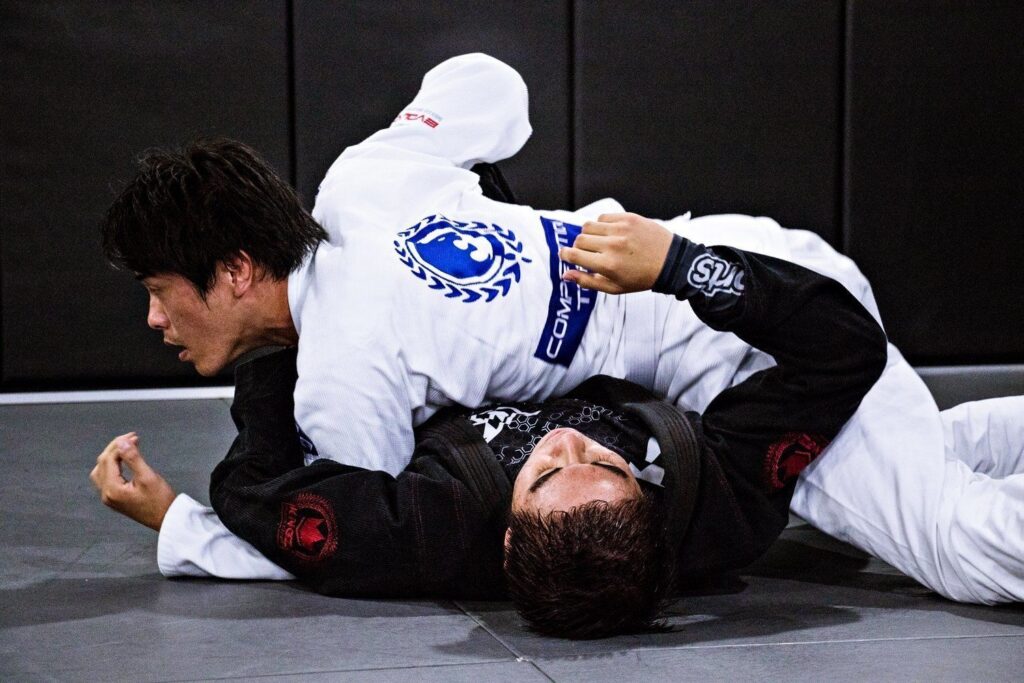 Ideally, you should be training at least 3-4 times a week to see improvement in your game.

As a white belt, it is important that you log in as many training hours as you can. We don’t expect you to train every day, but three to four times a week is ideal. If you want to get used to the movements and techniques, you need to be consistent – or else, you’ll have to start from scratch each training session. The strongest bonds are forged through martial arts.

Plenty of white belts take martial arts too literally. They go hard/use strength and force even during drills. Although some resistance is required during drills, it doesn’t mean that you need to go all out. Remember, as a white belt, your goal is to learn techniques and get a good workout in. When you’re confident enough in your abilities, you can start to think about competition and sparring. But first, make sure that you’re doing the techniques properly.

Just because you’re a white belt, it doesn’t mean that you’re too much of a newbie to “get good” at BJJ. Before you think about joining the Mundials, take your journey one step a day and work on mastering the techniques you learn in class. Before you know it, you’ve achieved your goals and you’re ready for more!