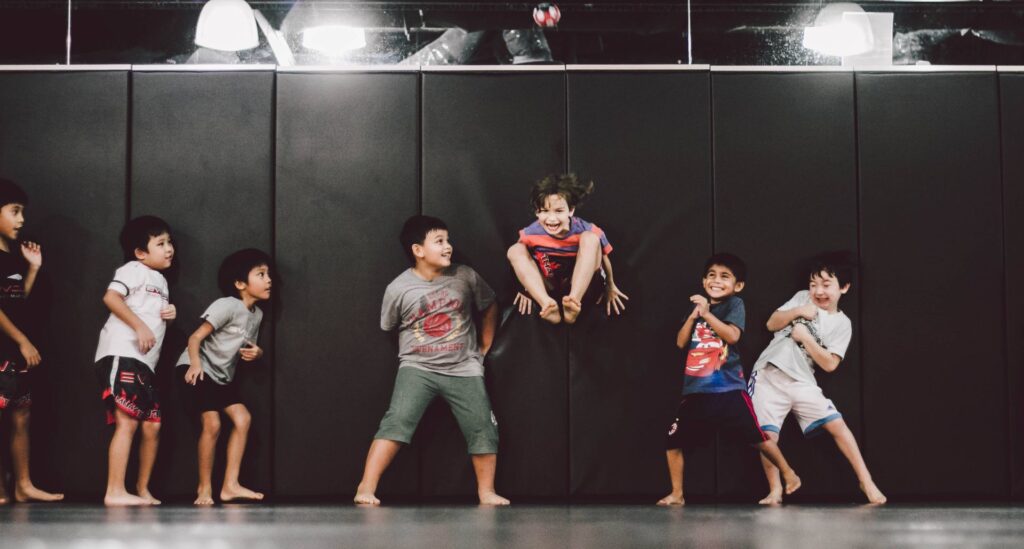 As kids, we were constantly exposed to martial arts – be it watching iconic martial artists on TV, or seeing how our favorite superheroes saved the day in the pages of comic books.

Besides keeping us entertained and teaching us some life lessons (like how Batman never had to kill his enemies to uphold justice in Gotham City), martial arts has inspired us and added color into our world – whether we realize it or not. And the best part is that it continues to brighten young lives and make the world a better place. Basically, it’s the gift that never stops giving! That’s why we believe that every child should train martial arts. Most parents make their kids participate in team sports in school so that they can learn about teamwork. But here’s the problem: not everyone gets a chance to shine. This is because competitive sports teams usually require only a certain number of members – and more often than not, the physically developed and “fitter” players are the ones that will get chosen by the coach.

This is why benchwarmers exist. They’re the kids who didn’t make the team, so they just stay on the bench, in hopes that they would get the chance to prove themselves on the field. Unfortunately, most of these kids end up just watching from the sidelines and as a result, lose confidence in their skills and themselves.

One of the best parts about letting your kids train martial arts is that they’ll never have to sit on the bench. What’s more, if they train hard enough and wish to compete, they’ll definitely get their chance to shine in the ring or on the mat. Hence, no one will get left behind.

Apart from that, martial arts teaches kids about teamwork, although it may seem like an individual sport. Besides training, drilling, and sparring together, kids will develop social skills and work towards their goals with their teammates. Although martial arts is believed to be a male-dominated sport, we believe that girls are just as capable of thriving in a martial arts gym. This is because girls and boys can train together in martial arts classes, and they’re all treated equally.

What’s more, martial arts also does not discriminate in terms of size. So smaller kids don’t have to feel inferior when it comes to training with other kids who might be more physically developed.

“In Brazilian Jiu-Jitsu (BJJ), size does not matter because a smaller person can use leverage and techniques to overcome a bigger and stronger opponent,” shares BJJ World Champion Alex Silva.

3) Progress (instead of perfection) is the main focus Kids sometimes have to deal with the day-to-day stress of chasing straight A’s and submitting perfectly done work in school. Unfortunately, they sometimes beat themselves up when they don’t achieve perfect scores, or feel that they’re underperforming.

Martial arts can help make the situation better by showing them that progress is more important than perfection. Also, they’ll learn to be patient when they don’t immediately master techniques, and more importantly, enjoy the journey without rushing to the destination.

4) Peace is always the answer Some people have the misconception that martial arts would make their kids violent, when in fact, the opposite happens! Martial arts imparts non-violent conflict resolution skills in kids, and also teaches them to be calm.

“When kids train martial arts, they learn how to behave and respect people,” reveals Alex. “This actually discourages them from bullying others, and they’ll also have the confidence to handle the situation if they’re the ones getting bullied.”

Because martial arts is all about peace, kids who practice regularly will learn to walk away from a fight when confronted. Hence, it is a great way to bully-proof kids and keep them out of trouble. If you think about it, your mind is actually your biggest limit, and it’s also the toughest obstacle to overcome. After all, fear and doubt comes from within.

When kids train martial arts, they’ll learn that sometimes, they have to fight against themselves in order to truly fight for themselves. That means they’ll step out their comfort zone, as well as push and go beyond physical and mental limits to overcome fears.

Once they’re able to face their fears and silence the inner voice of self-doubt, they’ll be able to embrace and accept themselves for who they are – as martial artists and people. And the best part is that because they believe in themselves and their abilities, they’ll go on to become masters of their fate.

Are you now convinced that martial arts is making the world a better place for kids? We believe that it’s truly how they can unleash their greatness! So why not let your kids try a class and see how things go?