The Evolution Of The Rush: Anticipating The Return Of Georges St-Pierre 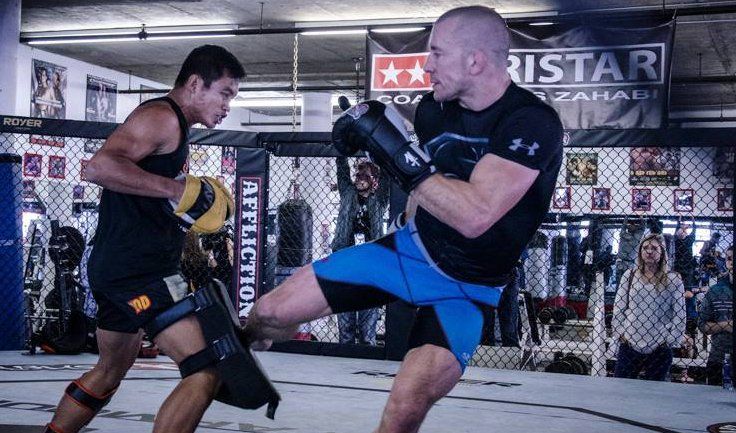 Who doesn’t remember Georges St-Pierre’s iconic walkout? Replete with a gi and bandana, he looked almost ridiculous, especially to viewers who weren’t so familiar with the UFC. However, once he stepped inside the cage and got down to business, everyone’s minds changed as quickly as “Rush” was able to lay down some serious offense. Today, GSP is the longest reigning UFC Welterweight World Champion, with 10 successful title defenses.

However, in more recent years, GSP has received plenty of criticism from fans. Compared to his earlier years in the UFC when he was known for his devastating finishes, he was becoming known as a “safe fighter” to some. Regardless of whether he is a “safe fighter” or not, GSP’s dominance in the octagon is undeniable and knowing that he is back in the game is truly exciting. GSP’s recently announced fight against Michael Bisping for the UFC Middleweight Championship is one of the most anticipated comebacks the sport has ever seen.

Today, Evolve Daily takes a look at GSP’s evolution as a fighter and what we could expect from his return to the cage:

The GSP of UFC 46 to 65 was a different GSP. Perhaps it was his fight against Sean Sherk at UFC 56 that helped cement his status as one of the greatest fighters to ever step inside the octagon. In this fight, Sherk was coming off a 32-1 fight career. In the second round, GSP took down Sherk and started to land some brutal ground and pound – fans were certain that the fight was almost over. It wasn’t until he landed that huge left elbow, which caused Sherk to scream, that Herb Dean put a stop to the fight. After this fight, it became clear that GSP was definitely a force to be reckoned with. GSP would go on to defeat BJ Penn and eventually Matt Hughes, winning the UFC Welterweight world title. GSP’s style was all about explosiveness and speed, which helped him earn the nickname “Rush”.

After a devastating loss to Matt Serra at UFC 69, GSP knew that he had to make some changes. He hired Tristar Head Trainer Firas Zahabi, a former Canadian Muay Thai champion and Brazilian Jiu-Jitsu Black Belt. Known for his analytical, in-depth and innovative style of coaching, his guidance has undoubtedly helped propel GSP to the top of the division. Unlike other coaches who mold their fighters to become the perfect antidote to their opponents, Zahabi focuses on making his fighters well rounded.

In an interview, he says: “If you look at GSP over the years, he’s the one guy whose style has adapted to fight any style. I always say he’s the perfect antagonist: Whatever you do well, he’ll take you out of that element. When he drowns you in that weak element, he’ll bring you right back to where you’re strong and he’ll beat you there because he’s weakened you first, and now you feel like you have no more cards to play.” Training with Zahabi completely changed GSP. He became a more cerebral fighter, using well-calculated techniques to control his opponents and completely dominate fights.

Perhaps Zahabi’s coaching style can be best seen in GSP’s fight against Josh Koscheck at UFC 74. Just months after his loss to Matt Serra, GSP was set to face Koscheck, one of the best wrestlers in the UFC at that point. A 4-time NCAA Division I All-American, it seemed impossible that GSP would be able to take him down. In the first round, GSP was able to take Koscheck down. He was able to do it again in the second round. But it wasn’t just GSP’s takedowns that were notable in this fight. It was his profusion of jabs, removing the threat of Koscheck’s dangerous right hand that proved that GSP was back in the game and ready to take his title back. GSP’s use of jabs turned Koscheck, a fighter usually not afraid to throw a lot of powerful strikes, into a more cautious fighter.

Over the years, GSP has continued to sharpen his weapons – Brazilian Jiu-Jitsu, Muay Thai, and Boxing with the help of some of the most elite trainers. These trainers include legendary Brazilian Jiu-Jitsu coach John Danaher, Phil Nurse and Trainer of World Champions Yodkunsup Por Pongsawang for Muay Thai, and recently, Manny Pacquiao’s renowned trainer, Freddie Roach. What is interesting is that all these trainers share the same philosophies about training and winning. “We all have a strident belief in the idea of high-percentage mixed martial arts — the idea of approaching the sport as a thoroughly professional athletic endeavor, with certain ways that will lead to success in the long term,” Danaher told ESPN. This ability that GSP has to continually evolve as a martial artist is, in part, due to his attitude towards training and learning. The Legendary Trainer of World Champions, and member of the Evolve MMA Instructor Team, Yodkunsup Por Pongsawang was GSP’s Muay Thai coach for his last 3 fights. Speaking of his pupil, Yodkunsup said, “GSP is a great student. He is very focused when he trains and is open to learning new things. This attitude enables him to learn new techniques and concepts very quickly.”

Although three years is, by all means, a lengthy sabbatical in MMA standards, it’s interesting to see what kind of fighter we will see upon GSP’s return. In this three-year layoff, however, GSP has been keeping busy. In a recent interview, GSP revealed: “I think it’s a good time to come back now because I’m 35 years old. I just finished a training camp that I did to see if I can come back to world-class level and I feel I’m in the best shape of my life.”

The MMA community is abuzz with the news of GSP’s move to middleweight and his instant opportunity at a title shot against UFC Middleweight World Champion Michael Bisping. Which brings the question: will we see the fruits of GSP’s training with Danaher, Zahabi, Roach and authentic Muay Thai?

Since his break from the sport 3 years ago, GSP has been seen training gymnastics. As some of the best athletes in the world, gymnasts are known for their dexterity and mobility. Recently in MMA, we have seen more acrobatic techniques and styles being used. Fighters like Stephen “Wonderboy” Thompson and Yair Rodriguez have had some success incorporating techniques such as spinning kicks, which take a certain level of mobility to execute, into their arsenal. With a karate background, GSP has been known to throw spinning kicks in the cage. With his new gymnastic skills, will we see him throw even more of those types of strikes?

For the past 3 years, GSP has continued to train with John Danaher. Recently many of Danaher’s disciples, known as the “Danaher Death Squad”, have been dominating the submission grappling scene with a game that focuses on and incorporates leg locks. Will all the extra time spent with Danaher, and his students such as Garry Tonon and Gordon Ryan, result in us seeing a new element of GSP’s grappling? Will he get his first ever leg lock submission victory? Recently when speaking about GSP’s return, Joe Rogan said, “He’s never out of shape at all. Constantly learning. Constantly training. I bet he’s better than ever. I bet he comes back and people think that he’s going to have lost a step. I bet he’s better than ever. He wouldn’t be coming back if he wasn’t.” Rogan also added, “I’ve been hearing his grappling is just off the chain. That it’s just better than ever.”

Will GSP try to pull off a leg lock? Are his jabs better than they ever have been before due to his continued work with Manny Pacquiao’s trainer? Unfortunately, there’s not much we can do but wait with bated breath until the fight happens.