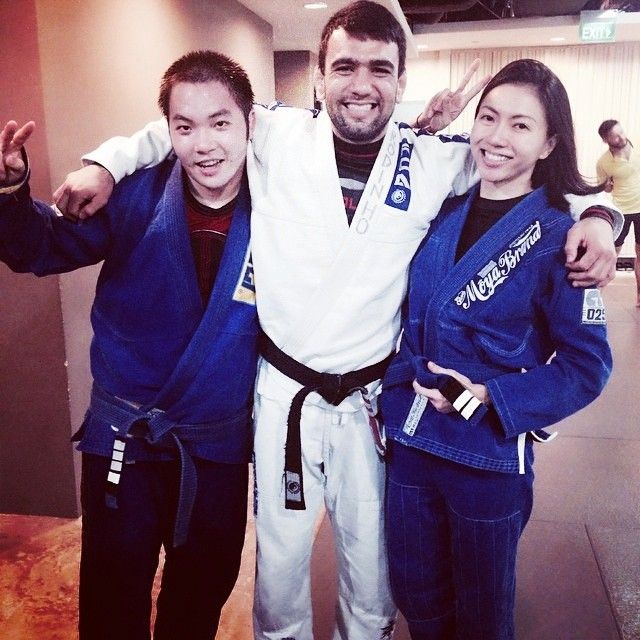 It’s not about how talented you are in the beginning, it’s how much you persevere. It’s how much you keep on going at it even if you don’t feel like it. That’s when you see the improvement coming in.”

This is coming from one of the most petite women at Evolve MMA who at one point in her life was quite accident prone. “I was such a klutz,” Soo Wei explains. “I kept on getting into accidents and falling over things.”

Today, Soo Wei has been nominated by all of her instructors to be Evolve MMA’s Student of the Month for September. Soo Wei is considered to be one of Evolve MMA’s most talented and dedicated students. She has earned the rank of level 3 in Muay Thai and blue belt in Brazilian Jiu-Jitsu, which according to Soo Wei is a feat in and of itself. “I remember my first Muay Thai class,” says Soo Wei. “It was such a rude awakening because of all the cardio. I really felt out of shape,” she continues. Instead of quitting right then and there, she decided to stick it out. She was determined to prove to herself and to others that she could do it. Since that first class, Soo Wei has not only gained confidence in her abilities but also in her coordination and agility. She has also cured her insomnia, a problem that had been bothering her for years. “I’ve really become a much happier person,”  Soo Wei admits. Soo Wei and her Little Samurais.

How much happier can one person get? Apparently, there are no limits to Soo Wei’s happiness. Although being effervescent and lively comes naturally to Soo Wei, who is also a radio lecturer at Ngee Ann Polytechnic; she genuinely enjoys the company of her students in the Evolve Little Samurai Program. “They’re so fun and cute!” gushes Soo Wei. “It’s really amazing to see how they grow and learn with each session.”

She has also made lasting friendships with her teammates, who fondly call her a “spunky, feisty girl.” Rae Amarullah, Soo Wei’s closest friend and teammate says,

I am inspired by Soo Wei’s skill and dedication to train harder and harder. I am often discouraged, yet her feisty, happy personality is so contagious that it pushes me to attend classes.”

It is this personality that shines through in everything Soo Wei does. All of Soo Wei’s instructors and teammates in Muay Thai, Brazilian Jiu-Jitsu, Wrestling, and WarriorFit consider her an absolute delight to train and work with. Soo Wei and her teammates take the time to smile for the camera after a BJJ class.

The Evolve Family would like to extend Soo Wei a sincere congratulations on her well-deserved Student of the Month honors. We look forward to seeing Soo Wei continue her martial arts journey at Evolve MMA, and we believe she has what it takes to reach her current goal of becoming a Brazilian Jiu-Jitsu purple belt.

Soo Wei is one of our hardest working students. She never gives up, even if she is a lot smaller than everyone else. In fact, her size has worked to her advantage. She is one of my most technical students, because she has had to rely on technique rather than strength. I believe she can achieve anything she wants to. I see the determination in her and how much hard work she has put into her Brazilian Jiu-Jitsu. I really enjoy having her in my class, and I look forward to giving her the purple belt she wants—as long as she keeps on working for it!”