WATCH: 5 Of The Best Wrestlers In MMA Today (Videos) 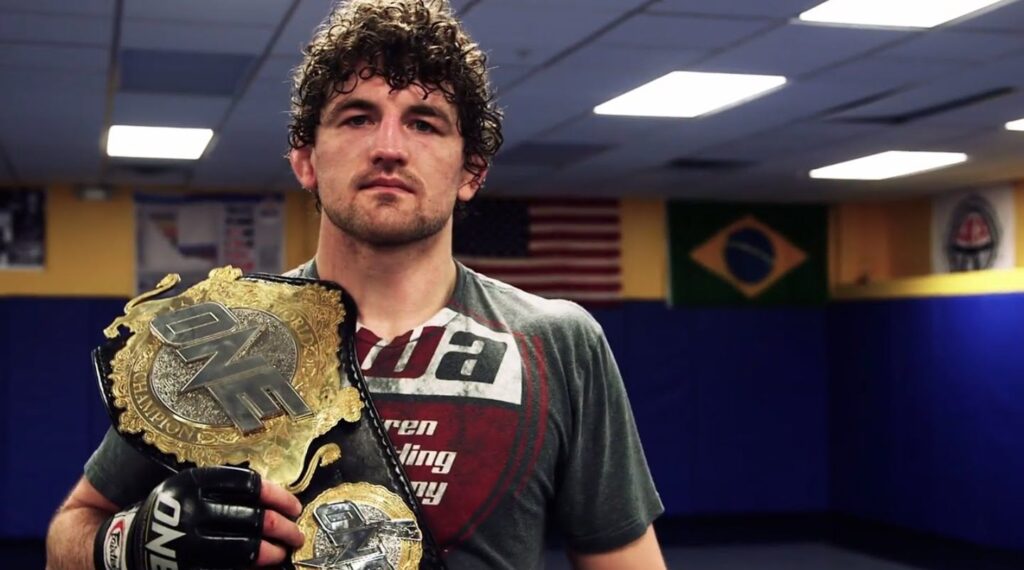 It’s no secret that wrestling is widely considered to be the best base for the popular sport of Mixed Martial Arts. Great champions like Georges St-Pierre, Cain Velasquez, Demetrious Johnson, and more recently Chris Weidman, Daniel Cormier and Ben Askren have all used the mentality and skills they picked up in wrestling to reach the very top of the sport.

So without further ado, Evolve Daily presents 5 Of The Best Wrestlers In MMA Today:

There’s no doubt that Ben Askren is one of the most successful and well-known pure wrestlers in the world of MMA today. The former Bellator Welterweight Champion and current ONE Championship Welterweight World Champion’s grappling credentials are incredible – multiple-time NCAA All-American, two-time national champion, World Grappling Championship gold medallist, and a 2008 Olympian.
So far, no one has been able to crack the “Funky” one’s dynamic wrestling style in the cage. Askren, who boasts an impressive undefeated record of 14 wins and no losses at the moment, will be taking on the always explosive Luis Santos for the second time after a controversial ending in their previous meeting. Come November 13 at ONE Championship: Pride of Lions in Singapore, the rematch will no doubt answer many of the questions fans have about Askren.

Support Ben Askren for his title defense THIS FRIDAY, November 13 at the Singapore Indoor Stadium!  The event is expected to be SOLD OUT.  So GRAB YOUR TICKETS TODAY! >>>>> http://goo.gl/GgPBj2

No other fighter on this list has been able to pull off takedowns in the MMA cage quite like Daniel Cormier. Just watch his fight with two-time Olympian Dan Henderson; Cormier’s incredible wrestling ability was on full display that night as he ragdolled Henderson for the entirety of the fight, making the MMA legend look like an amateur in the cage.

With his knockout wins and performances against the likes of Antonio “Bigfoot” Silva, Anthony Johnson and Alexander Gustafsson, Cormier has also proven time and time again to be equally deadly on his feet. The only man who’s been able to best the current UFC Lightheavyweight Champion is former pound-for-pound king Jon Jones. And it’s only a matter of time before the two rivals step into the cage once again.

An Olympic silver medallist and a freestyle wrestling world champion, Yoel Romero is quickly becoming one of the most exciting fighters in MMA. Since joining the UFC back in 2013, Romero has gone undefeated for six straight fights, winning the Knockout of the Night, Performance of the Night, and two Fight of the Night honors.

And after a spectacular knockout win over Lyoto Machida in June this year, Romero is now set to face former Strikeforce Middleweight Champion Ronaldo “Jacare” Souza at UFC 194. If Romero is able best the multiple-time Mundial world champion come December 12, there’s no doubt that he would be next in line for the coveted UFC Middleweight title, currently held by Chris Weidman.

In the realm of women’s mixed martial arts, there’s certainly no better wrestler than Sara McMann. At the 2004 Olympic Games in Athens, McMann entered herself into the history books when she became the only American woman ever to earn a silver medal in the Olympics, making her without a doubt one of the most decorated female wrestlers of all time. And since transitioning to MMA, McMann has consistently impressed fans with her amazing Olympic level takedowns.

UFC’s #5 ranked flyweight enigma, Henry Cejudo might not be the most experienced mixed martial artist on this list, but he’s certainly the most accomplished when it comes to wrestling. At just 21 years old, Cejudo reached the top of the sport of wrestling when he became the youngest American wrestler as well as the first of Mexican decent to win a gold medal at the Olympic Games.

However, since his debut in the UFC back in December of 2014, Cejudo has been making a statement with his striking skills instead of his wrestling ability, showing the world that he isn’t just a one-dimensional, “lay and pray” type of fighter. And with the impressive performances Cejudo has been stacking up in the UFC cage, it’s no wonder why he’s considered by many to be the biggest threat to current UFC Flyweight Champion, Demetrious Johnson’s title.

While there’s no doubt that elite MMA fighters have to well-trained in every aspect of the game, the fighters above prove that wrestling will always have the ability to help a fighter stand out and dominate, even in today’s MMA scene.