WATCH: 8 Of The Most Beautiful Spinning Techniques You’ll Ever See In MMA 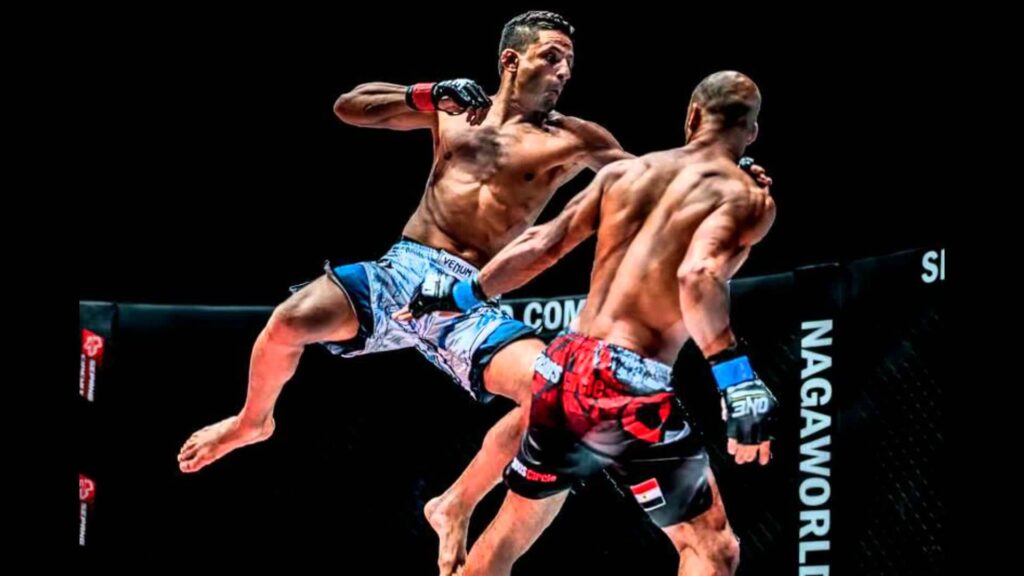 There are many reasons why Mixed Martial Arts is quickly becoming the fastest growing and most popular combat sport in the world. It allows the use of almost every martial art known to man; which also means that the possibilities for unique and flashy techniques are endless! And there might just be one particular type of technique that is more exciting than all the rest: spinning techniques.

So without further ado, Evolve Daily presents 8 Of The Most Beautiful Spinning Techniques You’ll Ever See In MMA:

1) The Spinning Back Elbow – Dong Hyun Kim vs. John Hathaway

The spinning backfist is truly one of the least utilized weapons in MMA or any striking based combat sport for that matter. The technique is usually thrown after missing with a kick or slipping a punch. And with knockouts like this one, there’s no denying its effectiveness.

A wrestler with an unorthodox striking style, Emanuel Newton has made a career out of beating bigger name opponents. The Former Bellator Undisputed Lightheavyweight Champion first made headlines when he knocked out fan favorite Muhammed “King Mo” Lawal with this stunning spinning backfist to win the Interim Bellator Lightheavyweight title.

It’s safe to say that no other fighter has been able to pull off the 360-elbow strike quite like Mohammad “Barbod The Unleashed” Sotounzadeh. In fact, many wouldn’t even consider the technique to be possible. However, Sotounzadeh executed the technique like it was child’s play. And although he didn’t win the fight, he certainly created one of the most unique MMA highlight reel moments in history.

4) The Spinning Back Kick – David Loiseau vs. Charles McCarthy

A good example of this is seen in this fight between David Loiseau and Charles McCarthy. Loiseau was one of the best strikers in the UFC during its early days. And he proved that in this fight by landing a perfect spinning back kick right to the ribs of McCarthy – Ouch!

There’s nothing more impressive than a 229-pound heavyweight performing a flashy, spinning strike. Alain Ngalani is Cameroonian-born kickboxer and four-time Muay Thai World Champion known for his speed and powerful kicks. And he lives up to his reputation here with this blindingly fast spinning heel kick knockout over Mahmoud Hassan in his ONE Championship debut.

Capoeira practitioners are not common in the world of MMA. This is because the moves and kicks involved in Capoeira are almost impossible to pull off in MMA. However, there are some fighters out there who dare to try a couple of Capoeira kicks once in awhile. And when Capoeira kicks land, the effect can be mind-blowing.

Here, Cairo Rocha tries his luck with a Meia Lua de Compasso. Fortunately for him, his opponent Francisco Neves didn’t see it coming. And by the time he finishes the technique, Neves is knocked out and laying motionless on the canvas.

What’s better than a spinning technique? A flying spinning technique of course! Anyone who knows anything about fighting would know how incredibly hard it is to actually land a flying spinning hook kick like this one thrown by Christine Stanley. And this 5-second knockout certainly proves why the newly signed Invicta FC flyweight is one of the hottest WMMA prospects today.

The name of this kick speaks for itself. Also known as the 540-kick, the Tornado Kick has actually been executed many times before in MMA. “The Notorious” Conor McGregor has thrown this kick many times before throughout his MMA career. This is because the kick is commonly practiced in Taekwondo and Karate, the two disciplines that have a big influence on McGregor’s fighting style.
Here, Michael Page – another promising MMA prospect with an unorthodox striking style – executes a perfect tornado kick against journeyman Ben Dishman. There’s no denying the power behind this kick; especially when it’s generated from a 540-degree turn!

Spinning moves in MMA are a thing of beauty. And regardless of whether you’re a fan of the fighters that use them, you’ve got to appreciate the level of skill it takes to pull off such techniques.

Grappling is a critical element of mixed martial arts. Joe Rogan popularly said that grappling, specifically, wrestling, is the best base for MMA because it allows the fighter to dictate where the fight goes.  Today,…