Watch: The 8 Most Incredible Submissions In ONE Championship (Videos) 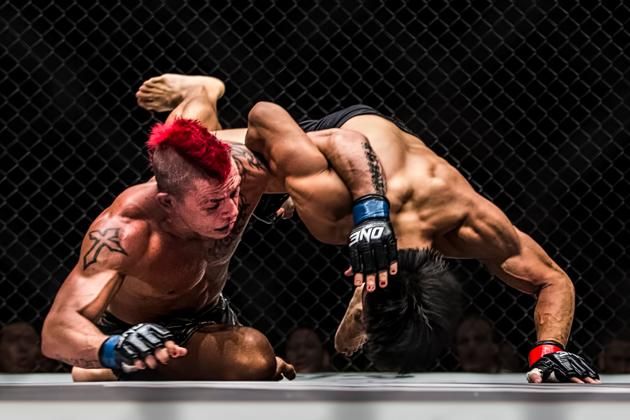 Every Mixed Martial Arts fan and fighter knows how hard it is to execute a submission. It requires perfect timing, technical knowledge and the guts to pull it off.

Though knockouts often steal the spotlight, a beautifully executed submission is definitely something that could literally take your breath away. Without further ado, here’s Evolve Daily’s compilation of the 8 Most Incredible Submissions In ONE Championship:

Possibly the greatest submission artist to fight inside the ONE Championship cage, Shinya Aoki was a shoe-in to finish this match with a submission. There was no doubt in anyone’s mind that this fight would end any differently – and it didn’t.

The second the fight started, Aoki’s dominance was evident. After tripping Shalorus, Aoki worked to secure and maintain the mount position with Shalorus desperately clinging onto his neck. Like clockwork, Aoki quickly transitioned to back control, sunk his hooks in and went for the rear naked choke.

In ONE Championship: Warrior’s Way, Fernandes, a BJJ World Champion used his superior grappling and wrestling skills against Kim, who seemed fazed by Fernandes’ relentless attacks. Although Kim was able to retaliate with a spinning back kick, it proved to be useless.

In the second round, Fernandes attempted a double leg takedown which gave him the back control. Without wasting any time, Fernandes sunk his hooks in and finished the rear naked choke.

This was definitely an exciting fight, with both fighters going back and forth in the first round with strikes and takedowns. At first, it seemed uncertain who was dominating the fight. With only a few seconds left in the second round, Ng managed to finally establish back control and finish the fight with an armbar.

Although it was Gafurov’s ONE Championship debut, his M-1 Global experience shone through as he defeated Rob Lisita in ONE Championship: Roar Of The Tigers. Within 68 seconds, Gafurov was able to land a devastating high kick and attack Lisita with punches. He saw the opportunity to secure a body triangle, finishing the fight with a rear naked choke.

Making his debut in the ONE Championship cage, the BJJ World Champion Burns utlized his superior grappling skills against Kelly, finishing the fight with a rear naked choke, 44 seconds into the first round. Not only does this fight showcase Burns’ technical knowledge of BJJ but also his ability to execute any technique with explosiveness and speed.

Renzo Gracie BJJ Black Belt Ariel Sexton showed no signs of weakness even after being knocked down. In fact, he used this position to his advantage, using a butterfly sweep to get Alizanhof on his back.

The previously undefeated Alizanhof was completely outclassed grappling-wise as Sexton continued to dominate the match by maintaining the mount position and transitioning to a reverse triangle as he was off balanced. He finished the fight with a crazy keylock from this position.

It was a tough match for both, with Muay Thai World Champion Dejdamrong Sor Amnuaysirichoke falling for Saiful Merican’s takedowns and strikes going back and forth. Although it would seem inevitable that a three-time Lumpinee champion would finish the fight with a knockout, Dejdamrong surprised everyone by submitting Saiful Merican with an armbar.

With three rounds of intense action, both Adriano Moraes and Kosue Suzuki looked determined to finish the fight with submissions. Although Moraes was able to take Suzuki down many times, Suzuki was able to defend his submission attempts.

In the third round, things took a turn for the worse for Suzuki. After finally securing the mount position, Moraes went for the arm-triangle choke and finished the fight.

In the ONE Championship cage, anything can happen. Regardless of whether you are on your back or on your feet, the threat of a submission never goes away.

With ONE Lightweight World Champion Shinya Aoki and many others fighting on Friday, May 22, at ONE: Warrior’s Quest, crazy submissions and knockouts will definitely make it a night to remember!