WATCH: 8 Of The Largest Fighters In History (Videos) 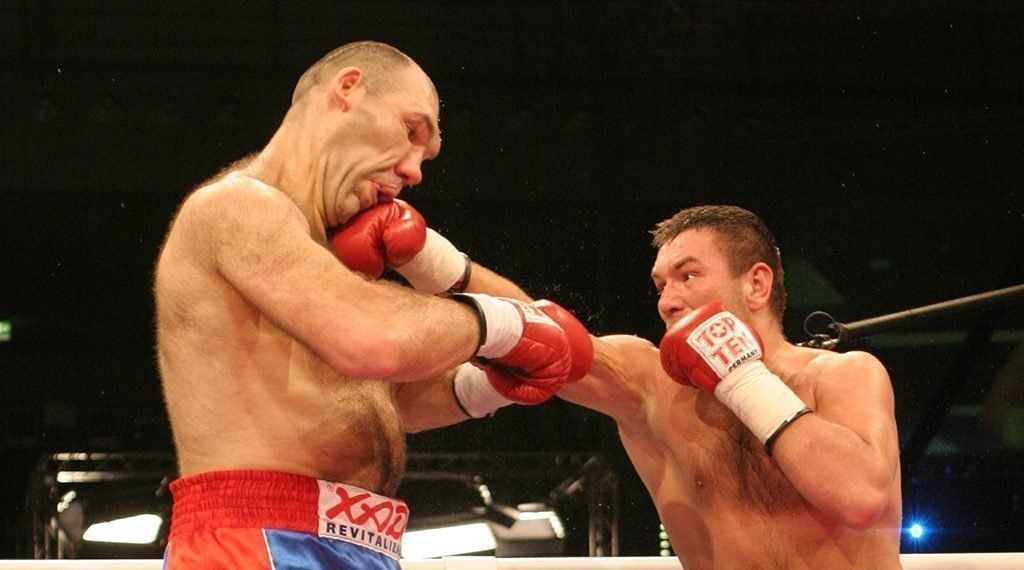 In the world of modern day combat sports, outlandishly big fighters have had a reputation for simply being freak show attractions. And while most of them aren’t particular good fighters due to their body structure, some have managed to find success with their monstrous size and strength.

These are the true goliaths of our time. Today, Evolve Daily takes a look at 8 Of The Largest Fighters In History:

Romanian boxer Gogea Mitu holds the Guinness World Record for being the tallest professional boxer to ever live. Mitu was first discovered at a circus fair featuring human oddities by boxing promoter Umberto Lancia. After going through intense, rigorous training, Mitu went on to compete in boxing in 1935, amassing a record of 10-1-1 with 10 knockouts in a combined total of nine exhibition and three professional bouts. Sadly, Mitu died prematurely of tuberculosis in 1936 at the age of 21.

Paulo Cesar da Silva, better known as Giant Silva, is a large, hairy behemoth that looks like a monster ripped right out of a horror movie. But in reality, Silva was a consummate nice guy; a real gentle giant that was frequently misunderstood. Starting out as a professional basketball player for the Brazilian national team in the 80s, Silva went on to a professional wrestling career, performing mostly for the World Wrestling Federation, New Japan Pro Wrestling, and HUSTLE from 2001 to 2008.

In 2003, Silva decided to compete in Mixed Martial Arts (MMA). And because of his enormity and already growing popularity as a pro wrestler in Japan at that time, Silva was signed to fight for PRIDE Fighting Championships. From there, he went on to an overall professional record of two wins and six losses. Silva also holds a black belt in Brazilian Jiu-Jitsu and a yellow belt in Taekwondo.

Hong-Man Choi’s massive size, hair, fighting style, and sometimes comical aspiration to be a hip-hop artist was what made him one of the biggest freak show attractions in all of combat sports. The “Korean Colossus” has a pretty impressive kickboxing record of 12-6, with wins over the likes of multiple-time kickboxing world champion Semmy Schilt, Mighty Mo, and Bob Sapp. His MMA career was not as successful, but he did manage to square off with Fedor Emelianenko and Mirko “Cro-Cop” Filipovic, two of the greatest heavyweights of his time.

Russian professional boxer and two-time WBA Heavyweight World Champion Nikolai Valuev is the stuff of nightmares. The seven foot tall, 330-pound brute’s death stare can break the will of any living being in the world. This could also be the reason why he has one of the most incredible records in boxing. Valuev has 34 knockouts in a total of 50 wins. His most notable wins are over four-time heavyweight world champion Evander Holyfield and former two-time WBA Heavyweight World Champion John Ruiz.

The most recent giant to join the world of combat sports is Chinese boxing star Jianjun “Taishan” Dong. Named after a famous 5,069 ft tall mountain located in the Shandong province of China, the man being promoted as the “Yao Ming” of boxing kicked off his fighting career in 2013 by knocking out Bob Sapp in a kickboxing fight held in Tokyo. He then decided to go into professional boxing in 2014 and since then, has beaten all five of his opponents, three of them by way of knockout.

Perhaps the most successful gigantic fighter on this list is MMA and kickboxing legend Sem “Semmy” Schilt. A 6th dan black belt in Ashihara Karate and a black belt in Kudo Daido-Juku, Schilt is a six-time K-1 World Champion, a Glory Heavyweight Champion, an Openweight King of Pancrase, the 1999 Fight Matrix Fighter of the Year, and more. Having beaten many kickboxing legends such as Ernesto Hoost, Jerome Le Banner, Peter Aerts, and Ray Sefo, Schilt is also arguably the greatest K-1 heavyweight fighter in history.

Being the first non-Japanese-born to ever reach yokozuna (the highest rank in Sumo wrestling), and winning a total of 11 tournament championships, Akebono Taro is definitely one of the ancient combat sport’s most legendary fighters. However, the Hawaii-native was never quite as successful in kickboxing and MMA. He has never won a single MMA match and lost eight out of nine of his kickboxing bouts. He did, however, get into the ring with some of the best in the sport, including Royce Gracie, Rick Roufus, and Remy Bonjasky.

Emmanuel Yarborough was known primarily for his fight at UFC 3, where he lost to the much smaller Keith Hackney, who has since taken the nickname of “The Giant Killer”. Yarborough was a world amateur Sumo champion and holds the Guinness World Record for being the heaviest living athlete in history when he weighed up to 882-pounds (400kg).

He is also the only man to hold a submission win by way of smothering his opponent! Yes, Yarborough literally laid on top of Tatsuo Nakano in their fight back in 1998 until the Japanese fighter had to tap from the lack of air. Yarborough sadly passed away in 2015.

Throughout history, people have always been equally fascinated and terrified by giants. These extremely large men or women tower over the rest of us “normal” people, reminding us that giants don’t just exist in films and mythical tales, they walk among us in the real world too!