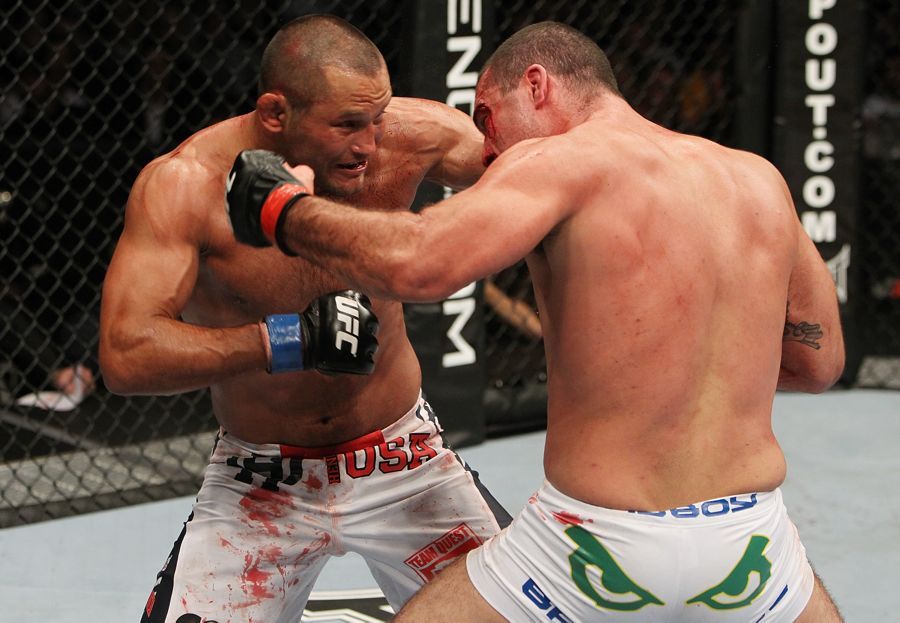 This Saturday night (Sunday morning, Singapore time), Dan Henderson faces Tim Boetsch at UFC Fight Night 68 at Smoothie King Center in New Orleans. After an 18-year career in MMA, nothing seems to be slowing “Hendo” down. Not even the 10-year age gap between him and Boetsch. And not even the reason behind Boetsch’s “Barbarian” nickname – his violent finishes in the cage and his brutal knees and uppercuts.

The two-time Olympian, two-division PRIDE champion seems unperturbed. Practically a legend in the MMA world, Henderson is more than ready to face his next opponent. Although he’s had a rough patch in the past few years, Hendo is determined to make a comeback.

Everyone remembers this fight. With Shogun looking to get back the title and Henderson making another debut in the UFC after fighting in Strikeforce, it was 5 rounds of nonstop action. From the moment they touched gloves, Henderson was relentless. After the first three rounds, it looked as if Henderson was going to end the fight.

Although Shogun successfully defended himself and was able to retaliate, he looked extremely gassed out towards the end of the last two rounds. Without a doubt, this fight went down as one of the best in MMA history. Henderson was awarded the unanimous decision and would meet Rua in the octagon once again in UFC Fight Night 38.

A fight two years in the making, it would be both Emelianenko’s and Henderson’s last Strikeforce fight. As the current Strikeforce lightheavyweight champion, Henderson was favored to win. This, however, would be his first fight in the heavyweight division.

Both fighters seemed eager to finish the fight as soon as they touched gloves, landing powerful punches on each other. Although Emelianenko was able to knock Henderson down, Henderson was able to recover quickly and establish the back mount position. From there, he was able to land brutal strikes to Emelianenko’s head, finishing the fight.

A fight that earned Hendo Knockout Of The Night and Knockout Of The Year in 2009, it was the culmination of their “US vs UK” coaching rivalry on the set of The Ultimate Fighter 9. With Team Bisping/UK winning both the welterweight and lightweight brackets, Hendo was out for revenge and eager to get a shot at Anderson Silva.

Hendo eagerly landed a powerful right hook, followed by a forearm smash to the face, causing Bisping to fall flat on the ground. Bisping never even saw it coming.

After his defeat in Kings, Sobral was looking to get another shot at fighting Dan Henderson. Unfortunately for Sobral, this wouldn’t be the fight that would help him get over his first loss. Throughout the fight, Henderson showed his vastly improved striking, surprising Sobral who had only known him as a wrestler.

Starting the fight with a strong right, Sobral was noticeably stunned, causing him to fall down on the mat. Seeing an opportunity, Hendo went for it and rained down a couple more heavy blows on Sobral, causing the referee to put a stop to the fight at 1:53.

After winning via decision against Vitor Belfort in PRIDE 32, many wondered how good Hendo really was, fighting in the heavyweight division. This fight disproved all theories, with Hendo successfully knocking out Wanderlei Silva. This would be the second time the two fighters would meet, the first with Silva winning by unanimous decision over Hendo.

Silva would then go on to defend his middleweight title over the next six years. Unfortunately for Silva, Hendo put an end to his six-year run with a spinning backfist, finishing with a devastating left hand. At 36- years old, Dan Henderson would be the first fighter to hold two major titles at the same time in different divisions.

For Boetsch, just being in the cage with Henderson is an honor in itself. In an interview, Boetsch reveals: “He’s a hero of mine. He’s one of the guys I’ve looked up to my entire fight career. He’s actually one of the guys I was watching fight before I even knew I wanted to be a fighter and wanted to emulate myself after him…. A huge opportunity for me on fight night.”

There’s no doubt that Henderson’s storied career trumps Boetsch’s experience in the cage. This Saturday (Sunday morning, Singapore time), we will find out whether Henderson still has it in him. Be sure to catch the fight!