WATCH: These Drills Will Automatically Improve Your Muay Thai If you clicked on the link to this article, you’re probably wondering how you can elevate your game as a Muay Thai practitioner. Well, you’ve made it to the right place!

One of the most important things you can do to up your game is firstly, to drill.

Besides playing a part in doubling your punching power, drilling would help you to master techniques – and of course – ultimately contribute to your progress and growth as a martial artist.

A knockout (or KO) is every martial artist’s desired outcome when fighting competitively. Besides putting an end to the fight, he/she would emerge victorious.

Why it works: The right cross (or left cross, for Southpaws) is your strongest punch because it’s executed using your master hand, and pushed by your strong leg. Because your punch starts from the back, you have a bit more time to power it up by building up speed.

Tip: When practicing with your partner, you don’t want to really knock him/her out! So start off by focusing on technique and speed rather than power.

Fakes are a great way to catch your opponent off guard, especially if he/she is constantly blocking your strikes. By throwing some fake strikes, you’re buying yourself a bit of time to throw your intended strike, while your opponent reacts to your fake one. Besides confusing your opponent for a moment, your strikes would be less predictable; hence, making it harder for him/her to block.

In this video, you’ll learn how to utilize a fake kick and fake knee to set up 5 different combinations.

Why it works: The fake strike would distract your opponent and he/she would not expect your next (intended) move. Of course, you have to make sure it’s timed well, and throw your intended strike as soon as your opponent gets confused.

Tip: Choose 1 or 2 of these combinations to focus on and drill before moving on to the rest. Remember, it is most important to get your technique right!

When executed well, low kicks can be a game changer because of the damage it causes. In severe cases, a fight stoppage might occur – that’s how much power a well-executed low kick has.

In this video, you’ll learn how to include the low kick in 5 different combinations.

Why it works: A solid low kick has the ability to weaken and cause significant damage to your opponent’s leg. Hence, limiting their movement and giving you the upper hand when it comes to landing strikes.

Tip: Before you make contact, stay relaxed so as to ensure maximum acceleration towards your target. Fully engage your core only in the moment right before you hit your target.

A powerful clinch locks your opponent in close range, so you can throw some knee or elbow strikes; or off-balance your opponent with a sweep. What’s more, the clinch would tire out your opponent if you manage to keep him/her in that position long enough.

Why it works: When your opponent is locked in a strong clinch, he/she would require more effort to throw strikes or gain inside control. Hence, giving you more control and creating more openings for you to land your strikes.

Tip: For better clinch control, stand tall with your back straight, in tiptoe position. Always aim to maintain a top, dominant position; and keep your elbows locked tightly around your opponent’s neck to stop him/her from getting inside control.

Now that you’ve gone through these drills, are you ready to take your Muay Thai training to the next level? Check out more Muay Thai videos at Evolve University, and don’t forget to drill! 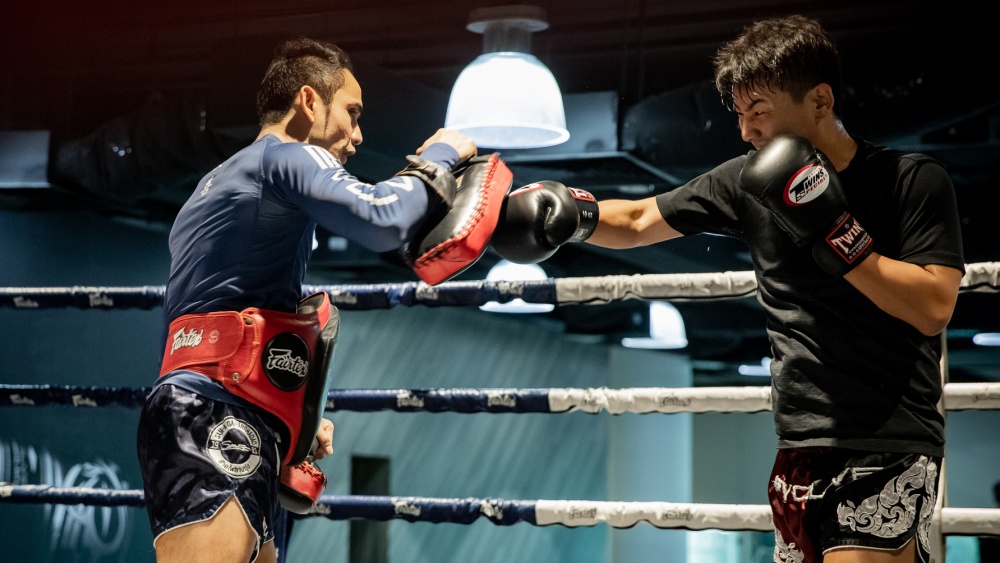