WATCH: The Greatest Moments Of The Evolve Fight Team In 2015 (Videos) 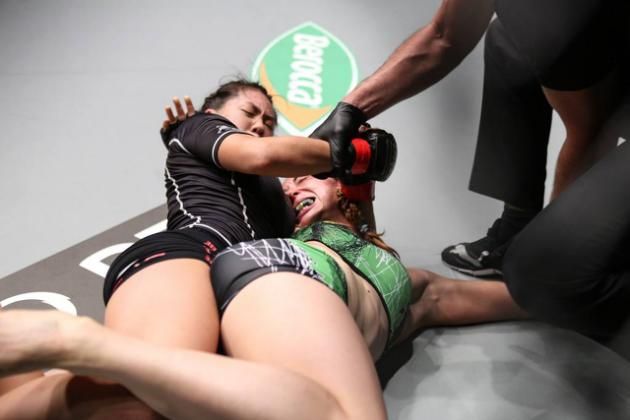 2015 was another awesome year for The Evolve Fight Team, Asia’s largest and most decorated professional fight team. With history makers, the hottest new talents in MMA, successful title defenses, and retribution — glory was indeed in the stars for the team this year.

Without further ado, Evolve Daily shares The Greatest Moments Of The Evolve Fight Team in 2015:

In an exciting battle for the inaugural ONE Strawweight World Champion title, multiple-time Muay Thai World Champion, Dejdamrong Sor Amnuaysirichoke faced professional boxer and top Filipino strawweight prospect, Roy Doliguez. It was an intense striking match of  Muay Thai vs. boxing. Unfortunately for Doliguez, Dejdamrong’s pressure proved to be too much, causing him to give up at the midway point of the fourth round.

Since joining the Evolve Fight Team this year, ONE Superstar Angela Lee has had three spectacular wins in a row, proving that she indeed has the potential to become Singapore’s first women’s MMA World Champion. Her fight against Natalie Gonzales Hills was particularly memorable thanks to the amazing twister submission that she pulled off at 2:24 of the 1st round.

In what was perhaps one of the greatest title defenses in the history of the Evolve Fight Team, UFC Lightweight World Champion, Rafael Dos Anjos took on Donald “Cowboy” Cerrone once again. At 1:06 of the 1st round, Rafael Dos Anjos successfully finished his opponent with a beautiful display of striking. Unfortunately for Cerrone, he never even saw it coming.

Once again, ONE Lightweight World Champion Shinya Aoki defended his title successfully against his opponent, Koji Ando. With a slew of takedowns and a smothering mount, Shinya Aoki made it an easy decision for the judges to score this fight in his favor. It would mark Shinya’s fifth straight win inside the ONE Championship cage.

This fight was a perfect example of BJJ World Champion, Bruno Pucci‘s world-class submission skills. At 2:19 of the 2nd round, Bruno finished his opponent, Anthony Engelen with his signature winning move, a rear naked choke. This fight was particularly bittersweet for Bruno who had spent almost 19 months out of training due to several injuries. It was without a doubt, one of the best comebacks in ONE Championship history.

Eager to avenge his last fight inside the ONE Championship cage, Amir Khan came in guns blazing against top Filipino prospect Jimmy Yabo. The young Singaporean dominated the match by wrestling his opponent to the ground. Here, he was able to secure the mount and finish with ground and pound.

ONE Superstar Benedict Ang‘s return to the cage proved to be a success. Although Benedict was favored to win, it was Yohan Mulia Legowo (7-3) who was the more experienced fighter. Unfortunately for Legowo, he was unable to use his pro MMA experience against his opponent. In the end, Benedict won the fight via TKO at 5:00 of the 2nd round.

The odds were against ONE Superstar and NCAA Division 1 wrestler, Jake Butler as he faced Cristiano Kaminishi, a BJJ black belt at ONE: Odyssey of Champions. Finally, Jake would face someone with a serious ground game as opposed to the slew of strikers he had fought before. However, Jake turned the tables around and was able to win the fight via decision.

So tell us, which fights were your favorite?