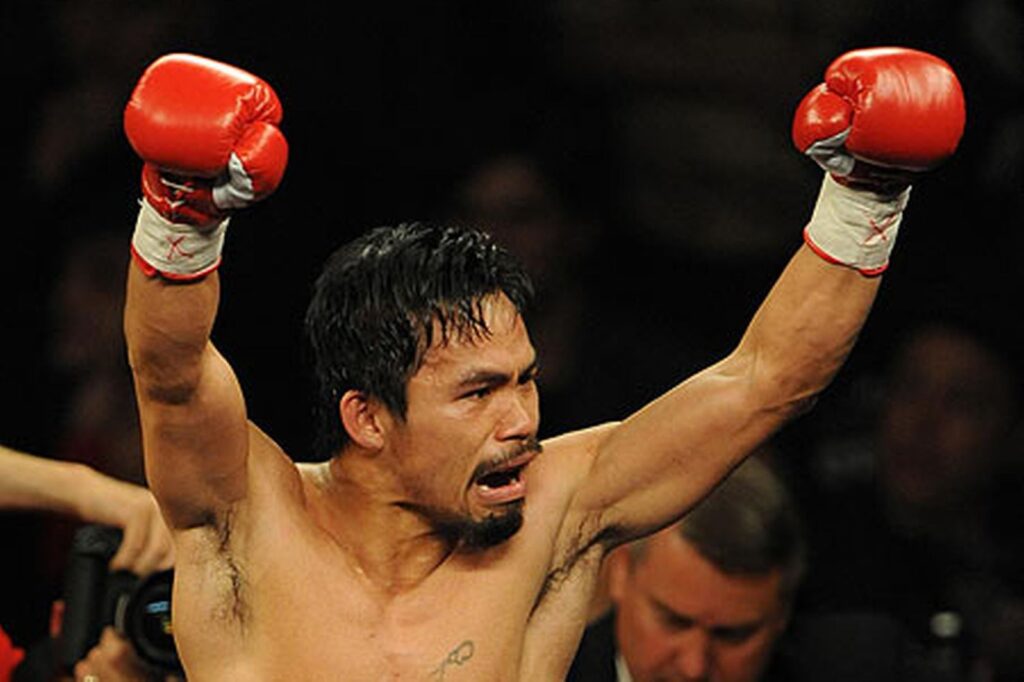 Over the past couple of years, both fighters have fought mostly at welterweight while occasionally going up or down a division to find more competition. So naturally, the fight between Pacquiao and Mayweather Jr. was set at the welterweight limit of 147lbs, a weight limit both fighters are probably more than comfortable with by now.

As he prepares for the biggest fight of his life, let’s take a look at Manny Pacquiao’s Best Fights At Welterweight:

On December 6, 2008, Pacquiao decided to move up to the welterweight division for the first time in his already storied career in order to face his idol and six-division World Champion Oscar De La Hoya.

Although Pacquiao was considered to be the world’s leading pound-for pound boxer at that time, many fans and experts alike speculated that the much larger De La Hoya would be too much for him.

However, Pacquiao proved his critics wrong as he dominated the entire fight, battering the Golden Boy for eight rounds before De La Hoya’s corner was forced to throw in the towel.

The skill and uncanny speed Pacquiao was known for in the lighter weight classes was on full display that night, showing the world for the first time that he could very well be a force to be reckoned with in the welterweight division.

After knocking out Rick Hatton at light welterweight, Pacquiao decided to return to the welterweight division to take on WBO welterweight champion, Miguel Cotto.

The hard hitting and much larger Puerto Rican was one of the best pound-for-pound fighters in the world at that time and was expected by many to be Pacquiao’s toughest opponent yet. Pacquiao put on what many considered to be the greatest performance his in career, dominating the action packed fight and knocking Cotto down twice before forcing the referee to stop the fight in the twelfth and final round.

Unlike many boxers who have moved up in multiple weight classes, Pacquiao proved through this fight that he had the punching power to trouble even those in the welterweight division.

When another negotiation attempt for the Mayweather fight failed in 2012, Pacquiao faced young pound-for-pound boxer Timothy Bradley. Bradley, a young up-and-coming boxer, would be one of the youngest and most athletic that Pacquiao would have faced in years.

Bradley was young, undefeated, and in his prime, causing many to doubt the much older Pacquiao. Pacquiao appeared to be dominating the fight and even seemed to be doing so with ease, out-boxing and frustrating his much younger opponent.

However, Bradley was given a very controversial split decision win over Pacquiao. The decision was booed heavily by those in attendance and criticized by many experts to be one of the worst robberies in boxing. The WBO’s Championship Committee would later review the fight and announce that Pacquiao should have won. And while the decision could not be overturned, a rematch between the two fighters was recommended.

After suffering a devastating knockout at the hands of rival Juan Manuel Marquez, Pacquiao took an 11 month hiatus from boxing. He would then return to face Brandon Rios for the vacant WBO International welterweight title.

Before the fight, many were unsure about Pacquiao’s ability to recover after the career threatening knockout he suffered. However, Pacquiao showed the world that he had not lost a step, dominating every round of the fight and landing a total of 223 power punches.

Following his win over Rios, Pacquiao met Timothy Bradley in a rematch on April 12, 2014. This time, Bradley was expected to be a much more dangerous opponent as he had faced Pacquiao before and was coming off a clear win over Juan Manuel Marquez.

The fight was much more competitive than the first but Pacquiao was the better fighter that night. He secured a clear unanimous decision victory and ended Bradley’s undefeated streak. This fight showed that Pacquiao still had what it takes to be at the very top and once again established his right to stand opposite the ring against Mayweather.

With so many great performances in his career at welterweight, it’s hard to ever doubt Pacquiao’s chances again Floyd Mayweather Jr. Be sure to tune in to the “Fight of the Century” on May 2nd, 2015!