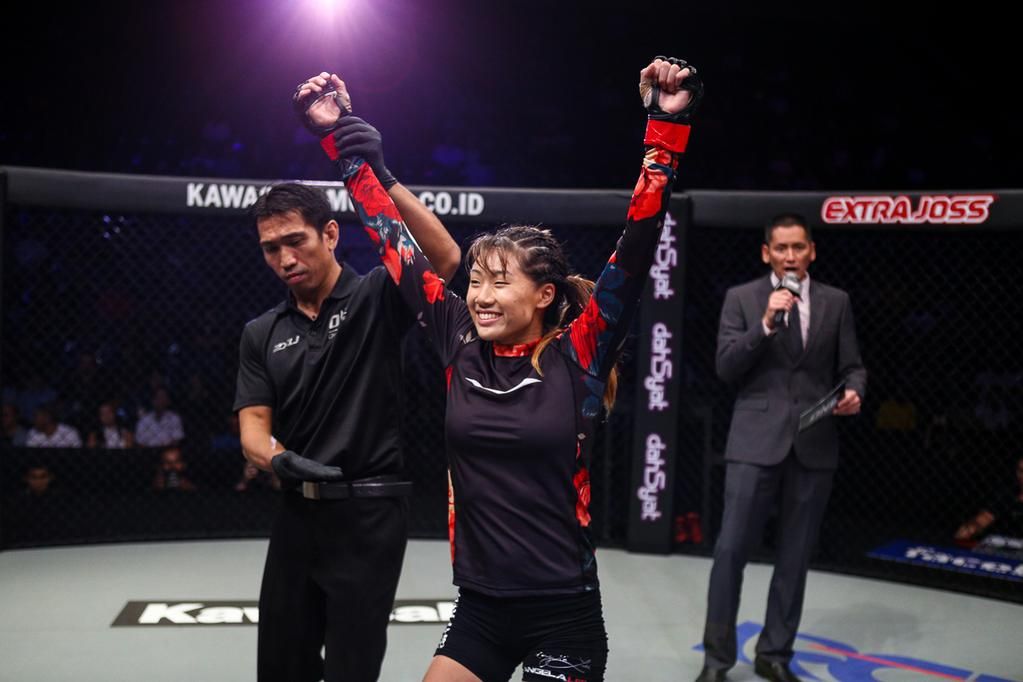 With the rapidly rising popularity of mixed martial arts today, it seems that more and more young, up-and-coming fighters are taking their skills and talents and putting them to the test in the cage. And while the UFC has young rising stars like Sage Northcutt and Paige VanZant, some of the youngest and most promising fighters in the world are fighting under Asia’s largest and most prestigious MMA organization, ONE Championship.

Today, Evolve Daily takes a look at ONE Championship’s Top 5 Fighters Under 21:

Teen sensation Angela Lee is quickly becoming one of the most popular female fighters in Asian MMA. At just 19 years old, Lee already has numerous world, national, and regional titles in various disciplines such as wrestling and pankration under her belt. And after her spectacular MMA debut performance against Aya Saber at ONE Championship: Warrior’s Quest, very few can’t deny that Lee is indeed something very special.

With a 1st degree black belt in Taekwondo and TDS and a brown belt in Brazilian Jiu-Jitsu, the young rising star of Singaporean-Korean descent has proven to be exciting to watch in every aspect of MMA; whether it is on the feet, or on the ground. And now with the World Champions of Evolve MMA behind her, there’s certainly no stopping Lee on her quest to be the first women’s champion in ONE Championship.

Agilan Thani is without a doubt one of the most gifted young fighters Malaysia has ever produced. Thani started his career in MMA at the age of 18 with a very brief but successful amateur career which saw him winning the Malaysian Invasion Mixed Martial Arts (MIMMA) amateur title and amassing a record of 5-0 all within a single year back in 2014. Now as a professional MMA fighter, Thani has carried the same dominant grappling style he adopted as an amateur fighter into the ONE Championship cage.

Climbing up the ladder however, will be no easy task for the “Alligator”; especially with experienced world-class fighters like ONE Championship Welterweight World Champion Ben Askren and Luis Santos leading his division. But if Thani continues stacking up impressive performances in the ONE Championship cage like his last two wins against Reant Febriza Rainir and Hesham Hiba, a title shot may very well be in the near future for him.

Amir Khan isn’t just the striking sensation he so unfailingly lives up. He is also an inspiration to fighters and fans all around the world. The 20-year old has battled through Tourette syndrome – a neurological disorder characterized by involuntary movements – to become what he is today; one of Singapore’s best and most promising MMA fighters.

In his ONE Championship debut, Khan made quick work of veteran Malaysian fighter Jian Kai Chee, finishing him with strikes in the first round. He then went on to force stoppages against Pakistan’s Waqar Umar and Bashir Ahmad, and put up one of the most exciting back and forth fights in ONE Championship history against Thailand’s Shannon Wiratchai. It will be a long and exciting journey to the top of one of the most talent-filled divisions in ONE Championship for Khan, but also one that will never fail to inspire fans around the world no matter the outcome.

With a record of 6-0 and a national title to his name, Evolve Fight Team’s Benedict Ang is without question the most successful amateur MMA fighter in Singapore. At just 19 years of age, Ang has already made headlines as one of the top teenage prospects to look out for in Asia after an impressive debut victory over five-fight verteran Waqar Umar at ONE Championship: Warrior’s Quest earlier this year.

Ang’s greatest strength no doubt lies in his wrestling and ground game. But training with Muay Thai and Boxing World Champions on a daily basis at Evolve MMA will most certainly help him cover up any gaps in the striking department and make him a world-class martial artist in every aspect. The sky’s the limit for Ang; and it’s only a matter of time before he finally stands opposite a top contender in the ONE Championship cage to get in reaching distance of that coveted title.

Very few fighters in the sport have ever been able to kick off their careers as impressively as China’s Li Wei Bin. Just four months after turning 18 years old, Li made his debut in a one-night-four-man flyweight tournament at ONE Championship: Dynasty of Champions and emerged victorious after submitting Hao Yi Jie in the semifinal and claiming a unanimous decision win over Wang Wei.

With a background in Sanda and Muay Thai, Li is a naturally gifted striker who has also proven to have some solid skills on the ground. Now after winning the flyweight tournament, Li has his eyes set on becoming the best flyweight in all of China. And there’s no better to achieve that than winning the ONE Championship Flyweight World Title from current champion Adriano Moraes. However, Li still has a lot to prove if he truly wants a crack at the title in the near future.

The future is bright for these young, inspiring mixed martial artists. And only time will tell how well they fare in times of adversity in the ONE Championship cage. Don’t forget to catch Angela Lee, Amir Khan and Benedict Ang back in action on November 13, 2015 as ONE Championships returns to Singapore for ONE Championship: Pride of Lions.