WATCH: The 7 Dirtiest And Most Common Street Fighting Tricks (Videos) 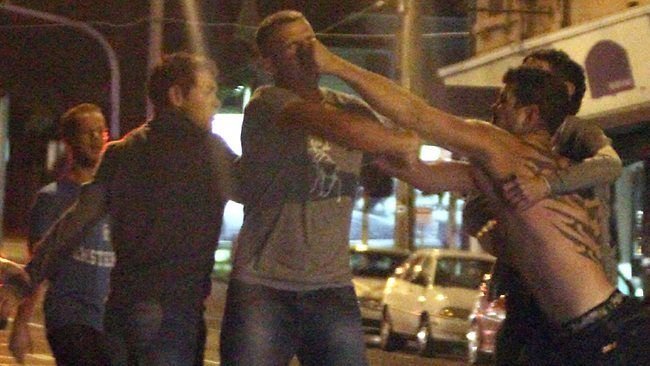 So you’ve found yourself in the worst possible scenario imaginable; a street fight, or a life-threatening situation. It is in these moments that you’re going to be thankful you’ve attended a couple of martial arts classes. But sometimes, being a martial artist or having some knowledge of self-defense might not be enough. Sometimes, you need some extra tricks up your sleeve in order to survive. At a minimum, it is useful to know what an attacker might use to initiate an attack on you.

*NOTE: Evolve MMA does not condone violence of any kind. We believe that martial arts should only be used as a last resort method of life preservation. If your life is truly in danger, then you can use your martial arts skills to defend yourself.

Today, Evolve Daily gives you The 7 Dirtiest And Most Common Self-Defense Tricks:

There’s a good reason why the eye poke, or any form of strike to the eye for that matter, is strictly prohibited in modern combat sports. The eye poke is a strike to the eye that is typically made with the fingers and usually thrown the same way a jab is thrown, quick and sharp. A poke to the eye can cause excruciating pain and if done with the right amount of force, even cause severe eye injuries such as eye loss or blindness.

This is what makes the eye poke such a lethal and effective technique in a real-life self-defense situation. When met with a life threatening situation on the streets, it is vital that you strike first. And when you do manage to strike first, it is also important to make sure that every strike counts. And as you can see from the video above, any form of strike to the eye will most certainly incapacitate your assailant, no matter how big or small he or she is.

If you’re looking to incapacitate an assailant quickly and without a lot of effort, a jab to the throat with your fist, fingers, or even your forearm is one of the simplest and most effective techniques you can do. Anyone hit in the throat will usually panic, not so much from the pain, but from the extremely uneasy sensation that is similar to the feeling of vomiting, getting the wind knocked out of you, and breathlessness combined.

Contrary to popular belief, the best place to strike the throat is actually not the Adam’s apple, but the softest part of the throat located just above the sternum or breast-bone. As seen in the video above, a throat jab will no doubt leave an assailant incapacitated and choking. However, you should only ever use this technique when you are sure your life or the lives of your family are on the line. This is because a strike to the throat can be very lethal. It can cause significant damage to the vocal chords and severe structural damage to the wind pipe, which could possibly lead to death.

Perhaps the most commonly taught trick to use in a self-defense situation is the groin shot. Everyone knows that an attack to the groin can be extremely debilitating due to the large amount of sensitive nerve endings in that area for both males and females. With enough power, a strike to the groin area can even fracture the pubic bone, leaving an assailant physically disabled and paralysed in immense pain.

However, as the video above shows, it is always better to not leave anything to chance. Once you’ve landed a successful “low blow”, don’t stop there; focus your attacks on the assailant, especially in the critical strike zones, until you are sure he or she is no longer a threat to you.

The elbow is the hardest bone on the upper body to strike with. As combat sports like Muay Thai and Mixed Martial Arts and the video above have shown, an elbow strike can cause severe lacerations and if landed with the proper technique on the jaw, can easily knock out even the largest of men.

This technique however, is very limited in its range, which makes it an ideal trick to use when an assailant is very close to you or if he or she is grabbing you by the collar for example. Landing an effective elbow strike would require the proper technique, and there’s no better martial art to get you familiarized with the elbow than Muay Thai, “the art of eight limbs”.

Biting isn’t just brutally painful, it has the ability to instill a tremendous amount of fear and shock into an attacker. It’s best used when you’re either grappling on the feet or on the ground with an assailant. It may sound revolting, but the most effective places to bite are the face, neck, or any of the sensitive areas on the body like the groin or nipple areas.

When confronting someone with a weapon like a gun or knife in hand, biting the fingers, hands or arms is highly recommended. And for those of you who are not familiar with biting in a life-threatening situation on the streets, the video above will show you just how brutal and damaging biting can be in a fight.

Using the element of surprise in a self-defense situation is key to establishing dominance and control, especially when you know the attack in imminent. And next to the sucker punch, the headbutt is the best technique to use in those situations. The headbutt isn’t just one of the hardest and most explosive techniques you can utilize, it is also probably the most difficult strike to see coming. However, while a headbutt might sound pretty straightforward, if executed incorrectly, it can hurt you more than it will hurt the assailant.

Typically, the best part of the head to use in a headbutt is the forehead (frontal bone), where the bones are the strongest. The hardness of the forehead allows for a deadly blow with considerable force. As for the most effective and sensitive areas to strike, the nose or jaw is ideal; striking any of these areas will either knock the assailant out cold, leave him paralyzed in a tremendous amount of pain, or cause him to lose clarity in his vision temporarily.

The video above is another great example of the power of surprise in a self-defense situation. When the bullying victim has had enough, he throws an unexpected punch to the bully and puts him away with multiple strikes. In a life-threatening situation, it’s important to remember that there is no such thing as “fair play”.

So if you’ve tried to avoid the situation and truly believe that your life is at risk, then it’s time to use the element of surprise while you’re still ahead. And the general rule of any self-defense situation is that the person who attacks first is usually the winner. This means that a sucker punch could mean life or death, so don’t hesitate to use it.

However, Mixed Martial Arts, Muay Thai, Brazilian Jiu-Jitsu, Boxing, and Wrestling are widely regarded as some of the best martial arts on the planet; they are ring-proven, street-tested, and reality-certified. Learning a combination of all these martial arts will equip you well in most self-defense situations.

If you’re looking for a place that offers all these martial arts under one roof, be sure to check out Evolve MMA.