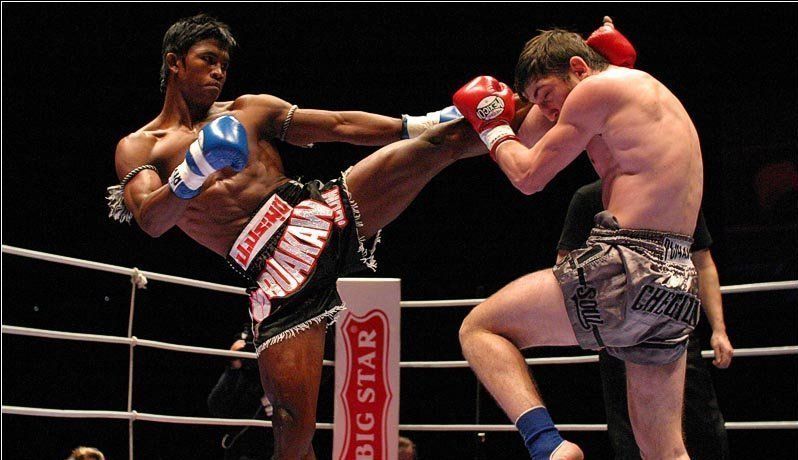 Besides those powerful knockout punches, did you know that kicks also have the potential to KO your opponent? Of course, you’d have to ensure that you accurately hit the vital KO spots. Also, your kick has to be set up properly and executed with the correct technique.

Want to find out more and elevate your game? Then you’re in luck! Today, Evolve Daily shares Explosive Kick KO Combinations That Will Take Your Game To Greater Heights:

The head kick KO is one of the of most dazzling ways to end a fight. Well, there’s a reason why this devastating move has made quite a number of appearances in highlight reels. With that said, the head kick is not an easy move to execute – after all, it requires perfect technique, timing, and accuracy.

In this video, multiple-time Muay Thai World Champion Penek Sitnumnoi demonstrates 3 head kick KO combinations in 30 seconds. If you watch closely, you’ll notice that Penek is able to stay balanced while executing his head kicks as he keeps an upright posture and swings his rear hand downwards. Also, he transfers his body weight into the kick by twisting his hip and thrusting it forward as he kicks. As we mentioned earlier, the head kick is not an easy move, so make sure you get the technique right – before even worrying about speed and/or power!

Tip: For more explosive kicks, build those leg muscles by running! Of course, it is just as important to work on your other muscle groups, so why not include some of these strength training exercises in your workouts?

Because the head kick is your intended strike, you want to be sure that it has a higher chance of landing at your target. Hence, it is crucial for you to set it up properly. When you do so, your opponent would have a much tougher time trying to predict your next move. As a result, it would be harder for him/her to react and block your kick in time – so you’d end up hitting your target.

In this video, multiple-time Muay Thai World Champion and ONE Superstar Dejdamrong Sor Amnuaysirichoke shows one of his favorite KO combinations. He begins by throwing a left kick to the inside of his opponent’s lead leg – this acts as a sweep which would knock his opponent off balance. Right after that, Dejdamrong proceeds to throw a head kick to his off-balanced opponent before finishing with a right cross.

Tip: Drilling your kicks with a heavy bag can help improve your technique. So make it a point to do so – whether before or after class. Eventually, you’ll get the hang of it and notice that you can execute those head kicks flawlessly.

Apart from aiming for the head, you can also strike at the liver if you spot any openings – this is because it is another vital KO point that can send your opponent to the canvas in seconds. Of course, your kick needs to have a perfect blend of technique and accuracy in order to be effective.

In this video, multiple-time Muay Thai World Champion Sam-A Gaiyanghadao demonstrates 3 liver kick KO combinations. If you’ve noticed that Sam-A executes his kicks effortlessly, it’s because he stays relaxed while throwing them! It helps to exhale on impact and stay relaxed when you’re kicking, so as to remain light on your feet and be able to execute your combinations more fluidly.

Tip: As with all kicks, you need to establish good balance and posture when executing the liver kick. Apart from maintaining an upright posture, keep your supporting leg straight and stay on the ball of your supporting foot so as to pivot and throw your kick with ease.

Are you ready to take your Muay Thai training to the next level? We know you can do this! So go forth and train hard!