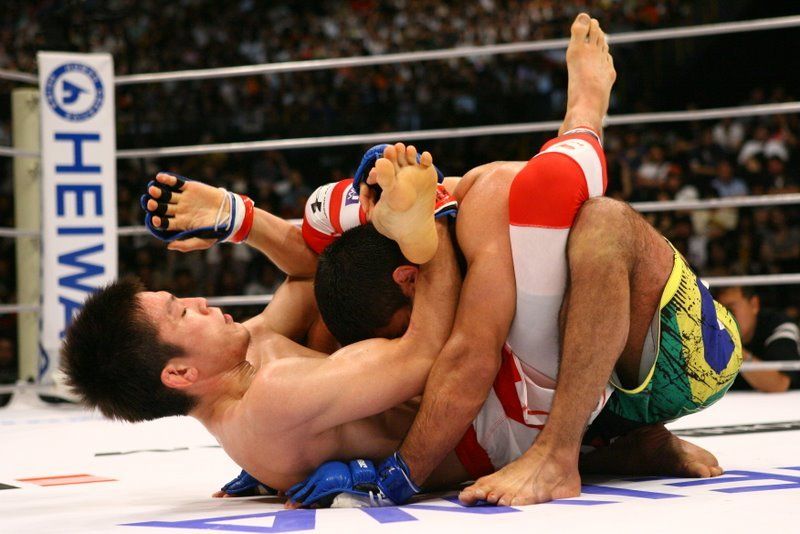 There’s something to be said about watching a perfectly executed submission. Although many people speak highly of knockouts, there’s no doubt that a submission is equally awe-inspiring.

We at Evolve Daily know you’re all big MMA fans, so we’ve compiled the 15 Slickest Submissions in MMA History for your viewing pleasure. We all know that there’s nothing more “HOLY %^$%$” – worthy than watching that awesome blend of perfect timing, strategy and power. Let’s see how these fighters have finished their fights:

Known as one of the only MMA fighters to pull guard during a fight, Evolve MMA Fight Team Member and ONE FC Lightweight Champion Aoki was able to execute one of the most difficult submissions in Brazilian Jiu-Jitsu. There’s no question about it – when it comes to grappling, nobody’s at par with Shinya Aoki.

Just like clockwork, Maia submitted Sonnen with a triangle choke in the first round. After securing top position from a takedown, he transitioned smoothly to the triangle – an easy feat for a BJJ World Champion.

In his first match out of three against Hughes, Penn managed to finish him with a rear naked choke. At this time, Penn was still a largely unknown fighter and his win over the then 5-time UFC Welterweight Champion caused a major upset.

Although a loss seemed certain for Imada in the first two rounds, he managed to pull off the best submission in Bellator history – an inverted triangle choke!

Nogueira was keen to seek revenge after having lost to Mir at UFC 92, and claimed that he had been suffering from a staph infection at that time, causing him to lose. Unfortunately, after losing control from a failed anaconda choke, Mir took advantage of the situation and submitted him with a brutal kimura.

6) Marat Gafurov vs Rob Lisita via Rear-Naked Choke, ONE Championship 21: Roar Of Tigers

This was a great debut into ONE Championship for the 29 year-old Russian. After dropping Lisita with a head kick, Gafurov quickly took advantage and secured a rear-naked choke in 68 seconds.

As soon as ONE Championship Superstar and BJJ World Champion Burns touched gloves with da Silva, he went for the takedown and quickly transitioned to the mount. In a matter of seconds, he was able to land a few punches and secure the triangle armbar for the finish.

In the first four rounds of this fight, it was unclear whether Silva would continue his reign as the UFC’s top middleweight. Throughout the fight, Sonnen dominated with his wrestling and ground control, making it difficult for Silva to do anything. In the last round, Silva saw an opening and took it, securing a triangle that would lead to Sonnen’s demise.

Many of us remember this fight because of Tate’s horrifyingly distended elbow, after refusing to tap to Rousey’s armbar. Although Tate had put up a good fight in the first few minutes of the first round, it was clear that Rousey was still the better fighter.

After losing to Hughes via armbar in UFC 50, GSP was determined to put him in his place the next time they meet in the cage. He did exactly that in UFC 79, pulling off the same submission, solidifying his place as the new top welterweight in the UFC.

Made famous by Eddie Bravo, the “twister” is a spine lock that is a combination of both BJJ and wrestling techniques. This was the first time anyone had ever pulled off this submission in an MMA fight.

12) Eddie “The Magician” Ng vs Arnaud Lepont via Armbar, ONE Championship 8: Kings and Champions

In the first round of this fight, it was difficult to determine who had the upper hand. Both fighters were going back and forth with strikes and takedowns, bringing the crowd to the edge of their seats. With a few seconds left in the second round, Ng managed to secure an armbar finish after establishing back control.

In his MMA debut, Gracie submitted his opponent not once but three times! According to Gracie, the referee did not understand what the “tapping” meant, so he kept on transitioning to other submissions.

14) Kazushi Sakuraba vs Renzo Gracie via Kimura, Pride 10: Return Of The Warriors

Known as “The Gracie Hunter”, Sakuraba would go on to defeat four members of the Gracie family. In this match, Sakuraba eventually finished Gracie via kimura, breaking his arm in the process.

In this historical rematch, it was obvious that Trigg was out for revenge. From the first round, Trigg showed no mercy, landing strikes and even getting the back mount to secure a rear naked choke. Although it seemed like a grim ending for Hughes, he managed to escape and eventually submitted Trigg with a rear naked choke of his own.

Since its early roots in Vale Tudo, the submissions we see in MMA today shows the technical prowess of the new breed of fighters who show strengths in all aspects. There’s no doubt that the sport of MMA has truly evolved – it’s safe to say that we can expect things to get more exciting. Here’s to the future of MMA!

Grappling is a critical element of mixed martial arts. Joe Rogan popularly said that grappling, specifically, wrestling, is the best base for MMA because it allows the fighter to dictate where the fight goes.  Today,…