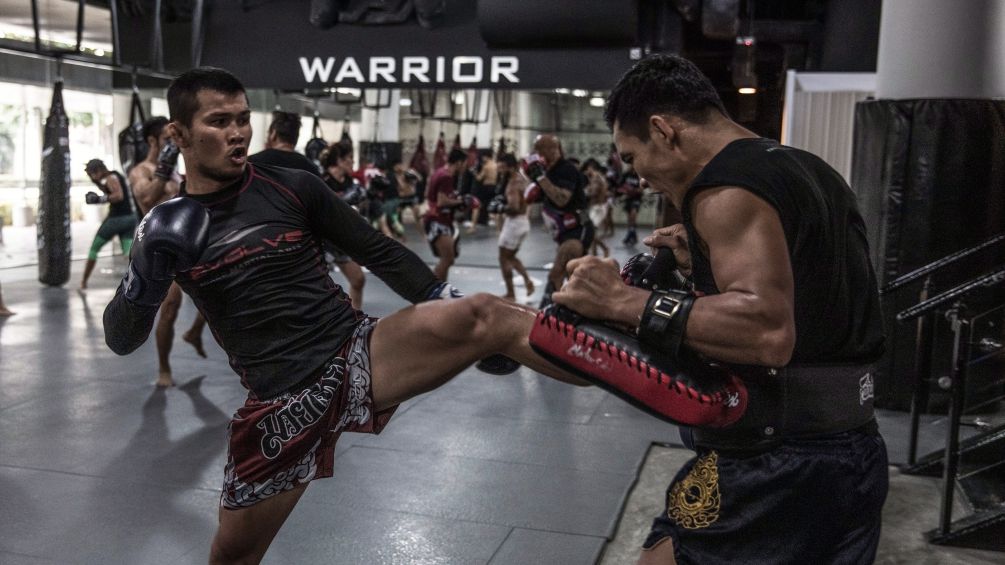 Muay Thai is widely considered to be the most comprehensive and effective of all striking arts known to man. Known as the “Art of the Eight Limbs,” Muay Thai encompasses the use of the fists, elbows, knees, and legs, providing the practitioner with a broad set of tools to choose from in battle.

Thailand’s national martial art and sport teaches the importance of employing numerous parts of the body in attack. More than this, there is a heavy emphasis on fighting in the clinch, which is a form of grappling on the feet. A trained Nak Muay (Thai boxer) will have a deep understanding of the fundamental tenets of battle while having the means to launch a wide variety of attacks from various points of the body.

Muay Thai continues to grow in popularity among practitioners and fans of mixed martial arts. As the sport has developed, it has become commonplace for fighters to base their striking game on Muay Thai. The emphasis in MMA has shifted from trying to prove what style of combat is the most effective, to combining the right disciplines to create the most effective fighter. When it comes to stand up, Muay Thai is undoubtedly the striking base most mixed martial artists will depend on inside the cage.

So, what is it about Muay Thai that makes it so effective?

The art of Muay Thai has been honed over hundreds of years. It was developed as a form of unarmed combat that would be effective in war. Much like an ancient warrior or soldier would have been equipped with a dagger, longsword, and shield, Muay Thai arms fighters with the ability to attack with the fists, elbows, knees, and legs. Depending on the positioning and distance of an opponent, there is a strike that will be sufficient.

When competing against a Western boxer, a fighter will know that the threat arises when they are within arms reach of the boxer. As the boxer can only attack when you are within punching range, it is easier to defend against. The trajectory of strikes, therefore, will also be easier to predict, as jabs, crosses, hooks, and uppercuts will make up the majority of a boxer’s striking arsenal.

There is no striking discipline on the planet as varied as Muay Thai and this poses a whole set of problems for any opponent. A Muay Thai fighter is equipped with so many weapons that it can be difficult to know what is coming your way. Aside from having to protect your chin, jaw, and midriff, anyone expecting to battle a Muay Thai-trained fighter needs to take much more into account.

One of the most utilized Muay Thai strikes in MMA, for example, is the low kick. Easily concealed behind punches and simple combinations, low kicks are targeted at the opponent’s legs as a means to take their mobility away. Low kicks are incredibly difficult to defend against, given the rapid speed with which they are thrown.

A series of low kicks targeted at the inner and outer parts of the lower leg and thigh can be extremely effective at limiting your opponent’s movement. If a fighter can’t move, they are at the mercy of the Muay Thai practitioner’s full arsenal of weaponry. A smart Muay Thai fighter will also blast roundhouses and push kicks to the midsection in order to break down his opponent’s stamina and ability to move. Additionally, they will target the arms with thunderous kicks to further restrict the opposing fighter.

Muay Thai Is Powerful And Effective

There is no escaping the fact that Muay Thai can be powerful and effective, despite how beautiful and spectacular it can often look. By its natural principle, the discipline teaches how to shut down and eliminate an opponent, piece by piece, by way of hard and efficient strikes. The use of the elbows and knees set Muay Thai apart from many other striking arts, giving any practitioner a distinctive edge in a combat scenario.

Although Thailand’s national sport preaches respect, discipline, humility, and positivity, it is an art that takes no prisoners. This is what makes it so attractive to fighters looking to equip themselves with the best tools for the job. Rather than training in a striking discipline that is focused on using a fighter’s strengths against them, Muay Thai is designed to take the fight to an opponent and overwhelm them.

Much of the effectiveness Muay Thai practitioners exude comes from the intensity of their training regimes. The art requires fighters to be in peak physical condition in order to unlock their true capabilities. The relentlessness of a Muay Thai fighter often comes down to his absolute dedication to his craft. There is a huge emphasis on cardio and strengthening the legs and this clearly shows, come fight night.

As many aspects of the human condition continue to evolve, man’s fascination with combat persists. Mixed martial arts has been the most important development in combat sports over the past few decades and we can see just how important a role Muay Thai has played in its development. There is a reason why Thailand’s national sport is so popular among mixed martial artists, after all.

Muay Thai is also in a state of continual growth, as more and more fighters across the globe begin to recognize its supremacy. For any human aiming to become the best fighter they can, or to improve themselves through martial arts – both physically and mentally – there is only one striking discipline that should be considered.

If you are interested in giving Muay Thai a try, sign up for a complimentary trial class today!