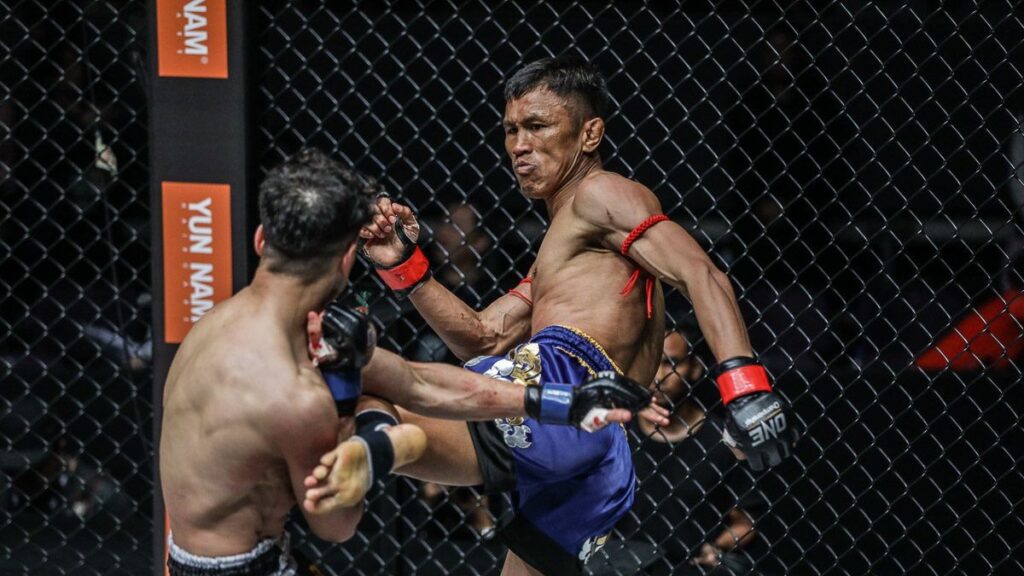 This Friday, 6 September at the Phu Tho Indoor Stadium in Ho Chi Minh City, Vietnam, ONE Championship holds its inaugural event in the country dubbed ONE: Immortal Triumph. Fans will be treated to an amazing evening of martial arts action.

One of the most-anticipated acts on the card is Muay Thai World Champion Singtongnoi Por Telakun from the Evolve Fight Team. He’s a living legend in the sport and continues an already amazing career in ONE’s prestigious Super Series.

Singtongnoi faces Kohei “Momotaro” Kodera of Japan in what is expected to be an action-packed contest from start to finish.

When it comes to memorable bouts, Singtongnoi has definitely had his good share of them. In a professional career that spans over two decades, Singtongnoi has delivered incredible performances. Above all, he’s overcome extreme hardship in his life to build his legend as a world-renowned Muay Thai fighter.

Here’s what you need to know about multiple-time Muay Thai World Champion Singtongnoi Por Telakun from the EVOLVE Fight Team! Support Singtongnoi as he returns to ONE Championship on 6 September at ONE: Immortal Triumph in Ho Chi Minh City!

Although he didn’t begin training in Muay Thai until he was 10 when he started to hit an old bag of fertilizer to practice his strikes, Singtongnoi would ultimately become a Lumpinee Stadium World Champion. He’s shared the ring with some of the greatest champions of his era. Let’s take a look at a handful of his best outings.

A great fighter’s career isn’t defined by just his skills alone. It’s defined with the quality of opposition he’s faced, and the names he’s taken in the ring.

Singtongnoi’s long list of fallen foes begins notably with a victory over an equal legend in Lerdsila Phuket Top Team. The two men first met at Thailand’s famous Rajadamnern Stadium in November 2005. The contest reached the full five rounds and went to a decision, but it was certainly an incredible battle between two future world champions.

Singtongnoi ended up taking home a decision victory, but it was the kind of fight that left both warriors’ stock in a much better place than it was before. Singtongnoi definitely gained a slew of fans on that evening.

Singtongnoi’s second victory over a renowned Muay Thai World Champion came in June 2009, when he faced Pakorn Sakyotin. The two have shared epic battles over their careers, and each encounter was laced with explosive back-and-forth action.

Pakorn was in the process of building what has grown into one of the most-respected Muay Thai careers of his era. However, on this summer day at the Rajadamnern Stadium, Singtongnoi would have his countryman’s number.

After a tremendous display of striking, Singtongnoi put together a performance worthy of a decision victory.

Few men in the sport have a more impressive career record than Jomthong. He has 206 wins to just 42 losses as a Muay Thai practitioner, and he has also had 10 professional boxing matches with a record of 9-1. To say that Jomthong is an experienced combat sports athlete is an understatement. However, Singtongnoi is responsible for not one, but three of the defeats on Jomthong’s record.

What’s even more impressive is that Singtongnoi handed Jomthong two of these losses back-to-back in February and June 2010.

Jomthong is a WBC Featherweight Muay Thai champion and a three-time titleholder at Rajadamnern Stadium. To put Singtongnoi’s win into the proper perspective, consider this: Jomthong has only lost consecutive matches three other times in his career. Those details alone make the victory over Jomthong one of his best.

Many legends now train and teach at Evolve MMA, and one of them is Muay Thai World Champion Sam-A Gaiyanghadao.

Singtongnoi and Sam-A met each other just once before becoming colleagues in Singapore. In November 2010, Singtongnoi would earn a hard-fought decision victory over his Thai comrade.

The bout happened at Lumpinee Stadium. At this point, Singtongnoi had already made his presence felt in Lumpinee when he scored a unanimous decision in the venue a month. However, arguably his most significant win at the iconic arena came against Sam-A.

Behind his signature pressure and fan-friendly style, Singtongnoi outworked Sam-A. Who knew that nine years later, the two men would be a part of the same promotion, let alone teammates?

After surviving his battle with cancer, Singtongnoi was determined to resume his legendary career. He would get the opportunity to do so when ONE Championship tapped him to join its prestigious ONE Super Series all-striking league.

Lasiri isn’t the most decorated opponent Singtongnoi has faced, however, when you consider what Singtongnoi had to overcome just to climb back into the ring to compete, there is no question the victory over Lasiri is the biggest of his career.

Singtongnoi had to overcome a second stint in poverty and, worst of all, stage 3 cancer that required radiation and chemotherapy treatments. Thankfully, Singtongnoi recovered.

After more than a three-year layoff, Singtongnoi battered Lasiri and earned the unanimous-decision win.