In Thailand, when you’re 25 years old, you must be very careful. It’s a precarious age – many bad things can happen to you. I should know; it was the worst year of my Muay Thai career. They call it benjapes. It started with my loss against Saenchai, at the end of 2010. Nobody could say that I didn’t give it my all – I was able to land some right kicks, but in the end I lost by a small margin. Before that, I had won 4 fights in a row. I was at the top of my game because I had won Fighter Of The Year for the second time. But that’s a fighter’s life. As the saying goes: you win some, you lose some. It’s just a decision that you make.

At the tender age of 9, I  made the decision to become a Muay Thai fighter. It was a far cry from the life my parents lead. They were orchard farmers and they would work in Bangkok after the farming season and do some construction. I grew up in a small, rural village in Sakhon Nakhon. It was very quiet, with lots of open spaces. Before Muay Thai, my life revolved around my village.

One of my neighbors was an up and coming nak muay who would fight in the big stadiums in Bangkok. He was in his 20’s and I would often see him train at home when he would return. I would just stand there, mesmerized, listening to the constant rhythm of his kicks and punches on the bags. One day, he spotted me watching him. He asked me, “Do you want to train?”

Of course I did.

After a month of training, the fighter said I had heart and that I was ready to fight. I was nervous. My parents had no idea that I was even training. They were away in Bangkok and my grandmother was in charge. That night, I won my first fight. I made 100 baht and gave every single satang to her. The following day, I had another fight and I won that too. 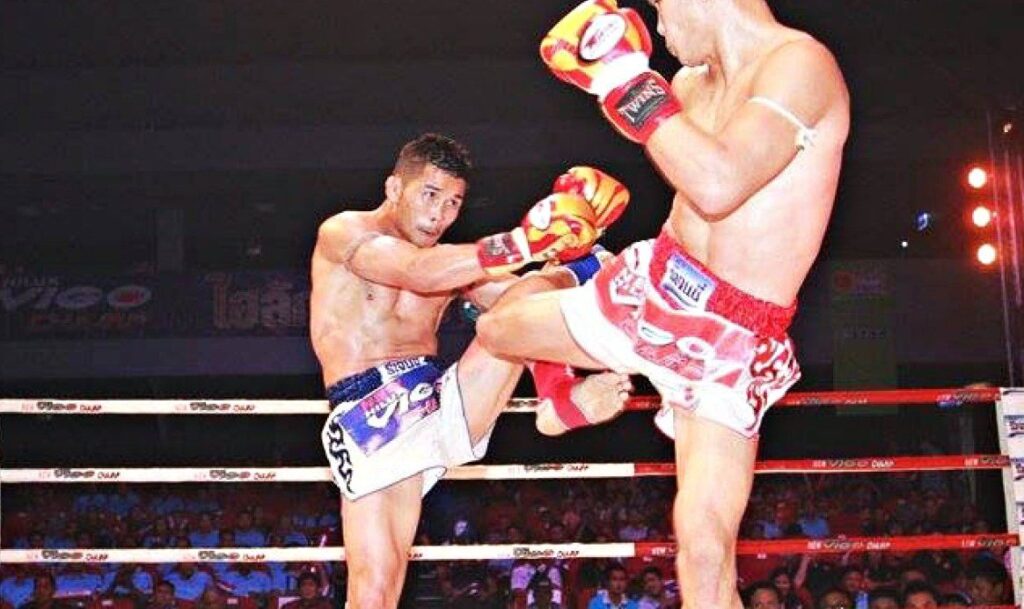 I would fight 8 more times before my parents found out that I was fighting Muay Thai. I thought they would be angry with me but they were surprisingly agreeable. At first, they refused to watch me fight. After all, I was still only 9 years old and their only son. Eventually, they gave in and got used to the idea of me fighting.

It was tough, going to school and fighting at the same time. I would run in the morning and train, and attend school after. I would be exhausted by the time I arrived in class. Luckily, everyone in school, even the teachers, was supportive of my fighting career. They gave me a special card that would allow me to attend classes even if I was late. I remember my friends huddling up in front of my seat in class, just so I could sleep.

Living at camp wasn’t any easier. I moved to Bangkok when I was 14. I was this little village boy living in the big city. I didn’t know how to act or speak; it was all very foreign to me. There were lots of other kids who came from small villages in the province. But at camp, I didn’t have time to make friends. It was all business – we trained, we ate, we went to school, and we slept. All I could think about was how much I missed my family. I was always counting the days till I could go home and visit them

When I was 15, I had my first big fight at Rajadamnern. It was under Onesongchai Promotion Thai Boxing, the biggest fight promotion in Thailand. It was a big show, with all these superstars I looked up to. I was part of the undercard but it was just so surreal, seeing all these big names next to mine. I fought Sipaenoi S.Sisompong and I won the fight by earning the judges’ nod.

As I continued to fight, I became known for my sweeps. Before my fights, I would do an in-depth study of my opponent. When it was fight night, I would use his techniques against him. I would set my sweep up with kicks and punches. I would sweep them whenever they countered. My sweeps became so well-known that a Japanese magazine featured this technique.

My first fight with Singdam – that, I would like to forget. I had fought him 12 times, but the first fight was unforgettable. I was bruised everywhere and I could barely move. The pain was excruciating. I went back home to my village and they did this traditional treatment where they put me next to a fire. Supposedly, this would help with my blood circulation. I remember being in a room engulfed with smoke and wanting to pass out from the pain.

Even though I’d been through a lot in my career, I feel like the biggest turning point was when I won my first Fighter Of The Year award. I knew I was a good fighter because I trained hard and won a lot of fights and titles, but this award was different. Finally, I felt like I had truly brought honor to my family. I had always given my family a large part of my prize money but this kind of prestige was different. Everyone in Thailand knew my name, they knew my family’s name. It was a great feeling.

It’s funny how fast your life can change. One day, you’re in the ring, fighting. The next day, you’re in a completely different country, learning how you can impart all the knowledge you have. Working at Evolve has given me a sense of security I’ve never really had. Sure, I won a lot of fights; but as you know, a fighter’s life is unpredictable. It’s difficult when you have kids; you want what’s best for them. And for me, the best thing is Evolve. Everyone is very supportive and helpful, especially because they know I’m a father.

Because of Evolve, I’m ready to face life’s challenges, even if I’m going through a phase of bad luck. I’m ready because I know my kids will be taken care of. They’ll be given opportunities beyond their dreams. And because of this, I am grateful. 10 Reasons Why You Need to Visit Singapore This Year

In need of a vacation? Why not start planning (and booking) one soon! Besides being something you can look forward to, we’re pretty sure it would be a much-needed – not to mention well-deserved –… With less than a month to Valentine’s Day, we’re pretty sure some of you might be racking your brains to figure out what to do with your special someone besides the usual dinner and movie…. Have you made plans for New Year’s Eve yet? If you haven’t, we think you should end 2015 on a fabulous note, surrounded by the people you love. Don’t forget to throw in some delicious… The Hidden Singapore: 6 Places You’ve Probably Never Been To

Despite being one of the smallest countries in the world, Singapore remains to be one of the most fascinating places you’ll ever find. Rich in culture and tradition thanks to its multi-racial society, Singapore continues…