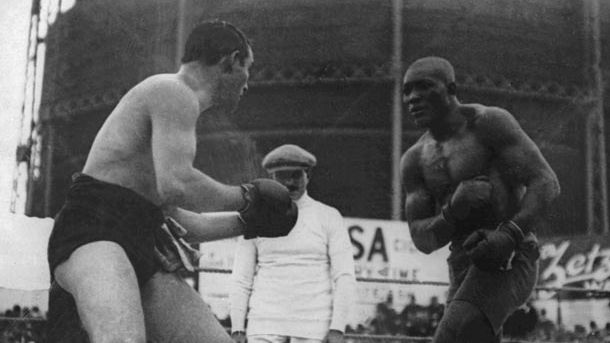 Boxing, one of the oldest martial arts in existence, is a modern-day sport rich with culture and history. Through decades of memorable bouts, boxing has produced a number of inspiring legends who have built the sport into what it is today. Among those legends is Jack Johnson.

Nicknamed the Galveston Giant, Johnson was a professional boxer known for being the first African American to win the world heavyweight title. He held the title from 1908 to 1915, effecting a period of utter dominance with every performance inside the ring. His 1910 bout against James J. Jeffries was fondly dubbed “Fight of the Century”.

Johnson was also one of the originators of boxing entourages, and a life of glitz and glamor seemed to follow him wherever he would go. According to filmmaker Ken Burns, Johnson was the most famous and most notorious African American on Earth during his time.

It’s time for us to dig deep and get to know the man who helped shape the sport that we know and love into what it is today. Johnson, one of the most influential African American sports superstars in history, certainly deserves the recognition.

Today, Evolve Daily looks into the life and times of one of the greatest boxers to ever live — the original baddest man on the planet, Jack Johnson.

John Arthur “Jack” Johnson was born on March 31, 1878, to father Henry and mother Tina “Tiny” Johnson, both of whom were former black slaves who worked odd jobs as a janitor and as a dishwasher respectively. Johnson’s father, in particular, was a civilian teamster of the Union’s 38th Colored Infantry and was a role model for Johnson in his developmental years.

Raised in the coastal resort city of Galveston, Texas, the third child of nine and the first son, Johnson helped his parents work by sweeping classrooms and taking care of horses for a local milkman before school. Like the rest of his siblings, he would pitch in any way he could to help ease the financial burden.

After he dropped out of school as a teenager, Johnson found himself working at a race track in Dallas, where he met a carriage painter by the name of Walter Lewis. Lewis had a passion for the sport of boxing and enjoyed watching fighters spar.

At the time, boxing was relatively new to Johnson. Not long after, Johnson tried boxing for himself, discovering he was a natural at it, and then later on giving credit to Lewis for inspiring him to become a boxer.

When Johnson moved from Dallas to Manhattan in New York, he found employment working as a janitor for a boxing gym owned by German-born heavyweight Herman Berneau. There, Johnson would both work on cleaning up the gym and then spar every chance he got. This is where Johnson began to develop his unique fighting style which would later make him a boxing legend.

By the time he had returned home to Texas, Johnson was a much bigger and stronger man. He soon received the opportunity to test his boxing skills, when he got into a fight with a man named Davie Pearson. The two met at the docks to settle the dispute and fought in the midst of a large crowd. Johnson would win, beating the much bigger, older man, and that’s when he realized he could make a career out of being a prizefighter.

Since boxing was, at the time, illegal in Texas, Johnson’s first ever fight was held on a random beach. He won, of course, and made his first dollar and fifty cents. This gave him the confidence to pursue his boxing career, and would later become precedence for one of the most epic stories of greatness in the sport’s history.

Early in his career, Johnson would become one of the most popular boxers in the sport. He is the creator of the boxing entourage, known to have a group of followers accompanying him in press conferences and media appearances.

At the time, African American boxers were prohibited from fighting white boxers and the world heavyweight championship was off limits. The reigning titleholder during that era was James J. Jeffries, who refused to fight Johnson on multiple occasions.

On December 26, 1908, Johnson faced Canadian boxer Tommy Burns in Sydney, Australia. Johnson had stalked Burns all around the world for nearly two years, hounding him every chance he got in an attempt to goad him into a boxing match.

Burns finally agreed to fight Johnson after being guaranteed a $30,000 purse. The fight went 14 rounds, with Johnson winning via decision. He was awarded the heavyweight world title for his efforts.

During his championship run, racial animosity ran very deep, with cries for a “Great White Hope” to come and take the title away from Johnson. Johnson, however, would continue his athletic dominance despite many trying to derail his championship reign.

The Fight of the Century

Then former undefeated heavyweight champion James J. Jeffries would soon come out of retirement to challenge Johnson. He had not competed in six years and was more than 100 pounds overweight. In the beginning, Jeffries had no interest in fighting Johnson, and he was quite happy living the quiet life as a farmer. But fans clamored endlessly for Jeffries to come out of retirement and beat Johnson.

Jeffries stayed mostly out of sight and shied away from press coverage in the lead up to the fight, while Johnson basked in the spotlight. Many pundits noted that Johnson was in such superior shape to Jeffries on fight night, that there was no chance of Johnson losing unless he lacked skill on the day. Jeffries would later state before the fight that it was his every intention to go out and knock Johnson out quickly.

Firearms, as well as the sale of liquor of any sort, were banned from the arena as racial tension continued to brew leading up to the match. The historic bout took place on July 4th in front of over 20,000 people in Reno, Nevada. Jeffries was unable to showcase the skills that made him world champion and instead was dominated by the younger Johnson.

In round 15, Jeffries was knocked down twice for the first time in his career, and his corner effectively threw in the towel to end the fight. After the fight, Jeffries put racial discrimination aside and gave Johnson his due credit, saying “I could never have whipped Johnson at my best. I couldn’t have hit him. No, I couldn’t have reached him in 1,000 years.”

Billed as the “Fight of the Century”, the bout earned Johnson over $65,000 (more than $1.7 million in 2017) and silenced many doubters. Media also gave Johnson his props, saying he won fairly and convincingly. For the first time in history, an African American man was the undisputed heavyweight champion of the world.

The Death of a Legend

Johnson continued his career, but like all legends of the sport, Father Time would soon catch up. Sooner or later, physical decline would affect the once glorious superstar. Johnson would continue fighting until age 60, when he lost seven of his last nine bouts. His lost last bout was in 1938 against Walter Price, dropping a 7th round technical knockout.

On June 10, 1946, Johnson died in a car accident in North Carolina. He was driving angrily and aggravated after coming from a diner that refused to serve him. He was taken to the closest colored hospital, Saint Agnes Hospital in Raleigh, North Carolina. Johnson was 68 years old at the time of death.

Johnson’s grave was initially unmarked. Today, a stone bearing only the name “Johnson” stands above.

Johnson is one of the most significant African American athletes in history and paved the way for many of boxing’s greatest legends to give rise to the sport that we know and love today. Guys like Joe Louis, Floyd Mayweather Jr., Mike Tyson, and Muhammad Ali all owe Johnson his due credit, and their careers would not have existed if it weren’t for what Johnson was able to do during his time on this Earth.

Head movement is a must in boxing. You can’t expect to block and parry all the punches coming at you. You need the ability to evade some of them as well. Protecting your head in…