Here’s How To Use The Russian Tie In BJJ 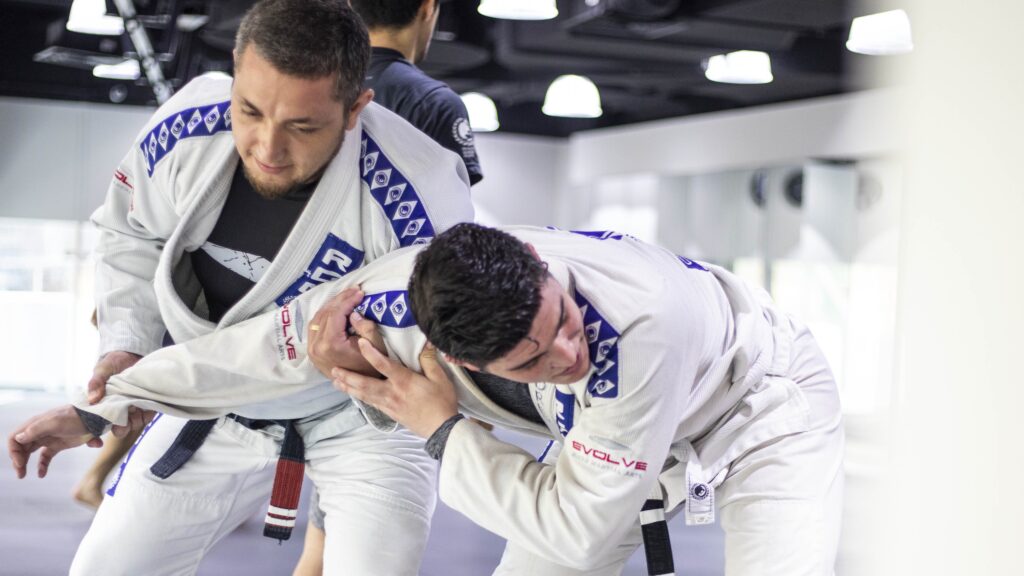 The Russian Tie is a powerful 2-on-1 grip that has been a staple of many grappling arts, such as wrestling and Sambo, for many centuries, yet it is just started to become popular in Brazilian Jiu-Jitsu (BJJ). Due to its defensive nature — it is very hard for your opponent to take you down once you have secured the Russian Tie — the grip is perfect for beginners and experts alike who seek to mitigate their opponent’s options while standing.

The most common way to set up the Russian Tie is when your opponent has a collar tie. If he is grabbing your head with his right hand, reach up and grab his wrist with your right hand as your left-hand reaches to his shoulder. Then, twist your body as you pull his grip so that his collar tie is negated, and that arm is now in front of you. From here, secure the Russian Tie by pulling up with the grip you have on your wrist, while you drop your shoulder on top of his. It should feel unpleasant for your opponent.

If you are drawn to the beginner-friendly nature of the Russian Tie, then the Ankle Pick takedown is the perfect attack for you to learn first. Just as the Russian Tie is a good position for beginners due to its low-penalty for failure, the Ankle Pick works in a similar way: it is a low-risk move, as attempting it doesn’t make you vulnerable to the counter-attacks such as guillotines, throws, or Kimuras that are always present if you use a more standard attack like a double or single leg.

Once you have established your Russian Tie, the first step to executing an Ankle Pick is to drive your shoulder into your opponent’s as you pull back on his wrist; this cranking motion on his arm, coupled with you stepping backward, will force your opponent to take a step with the foot he has furthest from you in an attempt to turn towards you and negate the “crank.” This is exactly what we want. As soon as his far foot lands on the mat, step forward and drop your outside knee to the mat, as the hand you had controlling your opponent’s wrist grabs his far ankle. Once you have secured the ankle, drive into your opponent, running him over with a safe, yet formidable Ankle Pick.

Much like we forced our opponent to step with his far leg to set up our Ankle Pick, for the single leg, we are going to get him to step with their near leg. To do this, use the powerful control of the Russian Tie to pull them towards you as you step backward and circle into the open space in front of you. As he takes a step with his near leg, step your front leg behind his so that it forms a “ramp” for his thigh. Then, drive your weight into him as the hand that you had on his wrist reaches down and grabs his thigh. As your bodyweight drives him off of his leg, you can let go of his arm with your other hand and secure his leg in the single leg position. From here, feel free to move into whichever single leg finish is your favorite!

While the Russian Tie is a powerful grip that offers you immense control over your opponent, just like every other position, it is not inescapable. Sometimes your opponent will be able to slide his arm out and begin to square up to you, which negates the cranking pressure of your Russian Tie, therefore making it much less effective. A common way for your opponent to escape is for him to post his free arm on your head, which will allow him to drive you away and start his escape attempt.

Once your opponent has committed to his escape attempt by pulling his arm back and standing up straight, you have the perfect opportunity to attack with a double leg takedown. As he powers upwards, go with his momentum, using the Russian Tie to hoist his arm up into the air; this will create the space you need to get under his arms and attack with the double leg. Once the combination of your “lift” and his escape attempt has created sufficient space, step in with your front leg and place your head on his far hip. From here, you can drive him down to the mat by “cutting the corner”, where you use your lateral head pressure to drive him sideways as you lift his legs in the air and finish your takedown! The first technique in this video shows this perfectly.

Not only does a properly executed Russian Tie prevent your opponent from taking you down, but it also allows you numerous takedown opportunities. The three techniques we covered above are a great place to start, but there are many more that are just as good, so make sure you keep practicing the Russian Tie in BJJ!

3 Gripping Strategies You Need To Know In BJJ