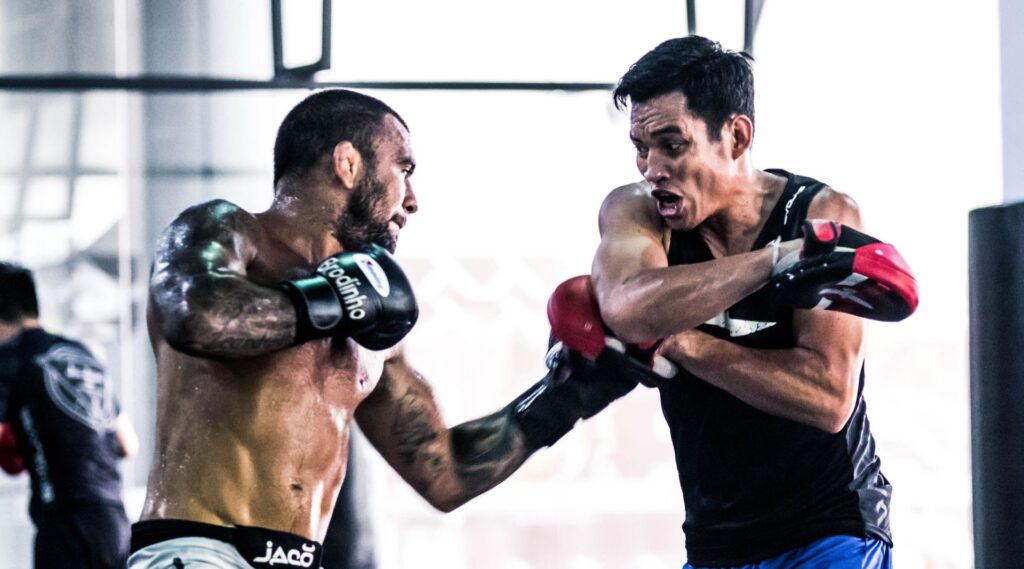 Body shots are incredibly effective offensive tools, not only in boxing, but also in Muay Thai, mixed martial arts, and the like. Which is why it’s such a shocker that they are so underutilized. When used properly, however, they have such a huge impact on fights. One single well-placed body shot can send any fighter down crumpling to the canvas.

Effective bodywork takes the wind out of an opponent’s sails and causes them to start breathing heavily. They slow down the rate of offense and hinder movement. Eventually, several telltale signs of distress will manifest, including shaky legs, the inability to breathe properly, buckling over, and in some cases knockdowns.

Once you get dropped by a body shot it’s extremely hard to recover. The mind will be willing, but the body will not be a part of it.

Training yourself to take body shots is key. For you to be able to increase your body shot punch resistance, you’ll have to work on enhancing your explosive shell.

Be prepared to take one in the gut. The next time your opponents throw body shots, you’ll surprise them by being ready. Today, Evolve Daily shares four ways you can strengthen your midsection and protect yourself against body shots.

1) Learn how to block and parry

The best way to take body shots is still not having to take them at all. For this, you have to improve your defense, especially when it comes to blocking and parrying. Hand-eye coordination is crucial to being able to block and parry, because you must anticipate an opponent’s attacks and successfully deflect them.

In boxing, extending the elbows to provide partial coverage of the midsection is the traditional defense against body shots. When opponents target the body, you will use your elbows to block punches from entering from the sides. Dip left and right to go from partial to full coverage. You’ll need strong obliques for this, so make sure to train your abs by doing various ab exercises.

The next defense from body punches is the parry. Although you can also use the elbows to close the gap in the middle, a more effective defense is the parry. Parrying will allow you to deflect an opponent’s punch and set yourself up to deliver a counter.

The explosive shell is that short sliver of time when your body and muscles tighten up right before the moment of impact. When you improve this area, you’ll have incredible body shot resistance.

Traditional methods of training the body to receive damage include having coaches or partners drop a medicine ball down on the abdomen while you are flat on your back. Right as the ball lands, you must exhale out and flex your abdominal “shell” at the moment of impact. Begin with a light medicine ball, increasing in weight as you get stronger.

There are other methods of training the explosive shell. For example, legendary boxer Manny Pacquiao has been known to use a bamboo stick to hit his midsection multiple times while he does crunches. The methods may vary, but the idea is training the clenching, flexing, and contracting mechanism in your abdomen.

The stronger your explosive shell, the better you will be able to receive body shots and the less likely you’ll go down because of them.

One of the most effective ways to train the body to receive body shots is in sparring. Sparring provides a real-world simulation of what an actual bout feels like. The ebb and flow of authentic action is simulated well in a controlled environment conducive to learning and improvement.

Have your sparring partner focus on hitting you with body shots primarily, so that you’ll be able to get used to defending against them. Don’t be afraid to let the body shots land. Also, this is a good test of the strength of your midsection.

Learn to breathe in and out quickly and flex your abdominal muscles and core at the same time in one swift movement. The idea is to try to bounce the body shot off with a quick clenching of your abdominal muscles. This engages your “explosive shell” which can stop your opponent’s punch from penetrating into your body.

Sparring is also a good time to practice your block and parry.

4) Condition the midsection with core exercises

Lastly, having great defense from body shots means having a very strong midsection, so don’t forget to train your midsection with engaging core exercises.

Crunches are a good start, and as a fighter, you should do them often. When you develop your core, everything becomes so much easier. You experience a jolt of energy which makes you stronger, faster, and more powerful.

Your core doesn’t only include the abdominal muscles, but also the lats, spinal erectors, glute complex, quadratus lumborum, and hip flexors which make up the outer-core muscles.

The stronger your core, the more stable you will be and the more fortified is your explosive shell. So make sure to enhance your core. The next time you take a body shot, your opponent will be surprised at just how strong you are.