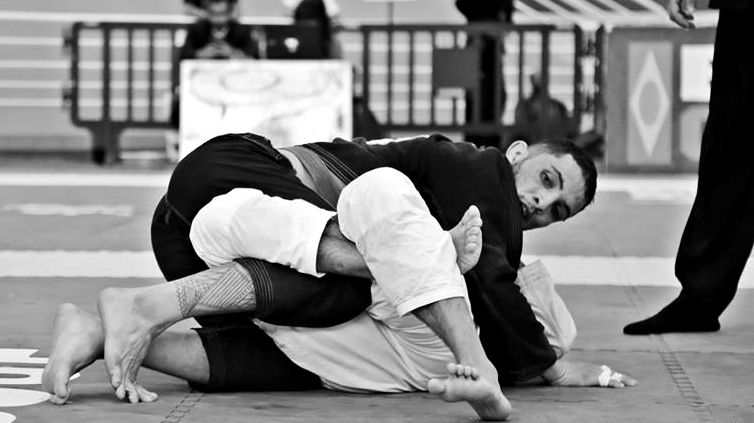 The Brazilian Jiu-Jitsu (BJJ) community has historically had a precarious relationship with the half guard position. It was originally considered a terrible place for the guarder to be—a last-ditch effort to hold on for dear life and attempt to delay the opponent’s inevitable guard pass. This reputation began to change when a young practitioner by the name of Roberto “Gordo” Correa popularized the position, showing that the half guard had real offensive capabilities.

Today, the attacking capabilities of the half guard are no secret. Many competitors in various grappling sports make effective use of the half guard, most notably Lucas Leite, Fabricio Werdum, and the Minotauro brothers. While the effectiveness of the position has been proven, it still hasn’t gained widespread popularity as was the case with spider guard, De La Riva, and other open guard systems. In an attempt to give the position the boost in notoriety it deserves, we are going to discuss the top three reasons why every grappler should focus on developing his/her half guard.

1) It Is A Powerful Sweeping Position

The best way to make the half guard a dangerous offensive position is to establish a powerful underhook on the same side of your opponent’s body as the trapped leg. While some variations of the half guard don’t require this underhook (most notably the knee shield guard), the capabilities of the half guard are multiplied once this underhook is established. What the underhook provides the guarder is the ability to get underneath the opponent’s center of gravity, keeping him off balance for sweeps and submissions while protecting the guarder’s hips from being crushed and flattened by the top player. Essentially, whoever has the underhook in the half guard exchange will be able to control the hips of his/her opponent, consequently leading to sweeps and submissions.

This is perhaps one reason why the half guard has been underutilized by the grappling community. If a bottom player does not have the underhook, his opponent can flatten out his hips, leading to a particularly miserable experience of getting crushed and then subsequently passed, but if the guard player has the underhook, his opponent will not be able to drop his weight down onto the hips, preventing the crushing pressure that deters so many from deciding to actively pursue the half guard.

It is hard to overstate just how powerful the sweeps that can come from a powerful underhook are to stop. Once you are under your opponent’s center of gravity, you will have almost unlimited control over him, which will provide you with abundant sweep and submission opportunities.

2) Opponents Will Force Half Guard To Pass

The half guard never has had the explosion in innovation that has been seen in modern open guards, such as De La Riva, leg lasso, and spider guard. As these open guard systems have become the meta of modern BJJ, they are constantly evolving. In an attempt to bypass these incredibly complex and troublesome guards, one emerging trend in the passing game is for the top player to willingly enter the half guard, as he would rather pass from there as opposed to having to deal with the troublesome open guard. What the passer is betting on is that the prevalence of the open guard in modern Brazilian Jiu-Jitsu has caused the guard player to forego studying the half guard in favor of the more attractive and modern open guards.

While it is important to become a well-rounded grappler by studying all different versions of the guard, this incredibly common scenario is another reason why you should be looking to improve your half guard game. The most advanced De La Riva guard is virtually useless if the passer can force the engagement into the half guard. However, if your half guard has been developed to a level where it is an effective offensive position, whichever guard your opponent decides to engage with will end poorly for them.

3) Half Guard Is The Easiest Position To Recover From

One of the most overlooked advantages of the half guard position is that it is the easiest position for a grappler to recover from when his opponent is in a dominant position. When stuck in a subordinate position, such as bottom side control or mount, the first thing you should do is defend yourself from submission attempts, but eventually, you will have to take action to escape. This is another case where having an effective half guard game will pay abundant dividends.

While there are many approaches to escaping from a bad position, moving to the half guard is by far the most straightforward and requires the least energy. One can always attempt to explode and roll over your opponent, but doing so requires tremendous strength and opens you up for submissions. A much better option would be to trap the opponent’s ankle, establishing the beginning of the half guard. From here, one can dig for the underhook, allowing all the capabilities of a powerful sweeping position that were discussed previously. With relatively minimal energy, the grappler has gone from being stuck in a bad position to one that allows him to threaten his opponent.

Escaping to the half guard is a far superior way of getting out of a precarious position, as it does not require the exertion of mass amounts of energy that exploding out or even escaping to a full guard would. If you are tired of being crushed under an opponent’s side control or mount, developing a strong half guard is a near perfect solution that will allow you to turn the tables on an opponent who thinks he has beaten you.

While these are just a few reasons why the half guard is a position worth knowing, they are not the only ones. Whether you want to be able to give your opponents a different set of problems or are just looking for a new position to drill with your training partners, you will not regret developing a strong half guard position!