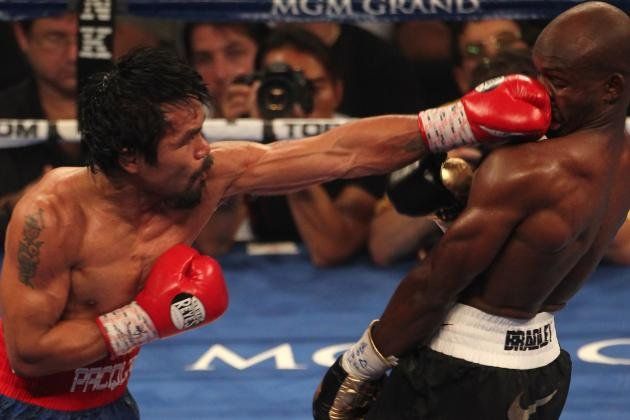 It has been reported that Manny Pacquiao intends to retire after his WBO Welterweight title fight against Timothy Bradley Jr in Las Vegas this April.

Being the first and only boxer to clinch titles in eight weight divisions, it is evident that the 37-year-old has already made history in the boxing world. Apart from being the fighting pride of the Philippines, Pacquiao has been named “Fighter of the Decade” for the 2000s and labelled “the greatest Asian fighter of all-time”.

Known to be a furiously fast boxer who throws plenty of powerful punches, while remaining defensively responsible, his exciting boxing style often leaves fans from all over the world at the edge of their seats. Out of a total of 65 fights (as of now), Pacquiao has won 57 – of which, 38 were by knockouts.

Before ‘Pac-Man’ steps into the ring for the last time ever, we would like to relive some of his most exciting moments throughout his professional career. Today, Evolve Daily shares Manny Pacquiao’s 5 Most Spectacular Knockouts:

Prior to this fight, Pacquiao lost to Erik Morales when they met in the ring for the first time. However, he avenged his loss by giving Morales the beating of his career.

Although there was no title at stake, over 14,000 fans showed up to cheer their countrymen on. Of course, Pac-Man’s supporters ended up doing majority of the cheering as he relentlessly attacked Morales and eventually broke him down, giving him the first real knockout of his career.

This spectacular knockout won Pacquiao the The Ring Magazine “Knockout of the Year” for 2009. We fully understand why.

In this fight against the British Ricky Hatton, Pacquiao absolutely destroyed him. After knocking Hatton down twice in the first round, Pacquiao proceeded to knock him out with a sharp left hook.

According to an interview, Hatton told ESPN that the knockout was so bad to the extent that he couldn’t recognize world famous celebrities Brad Pitt and Angelina Jolie after that fight.

Pacquiao’s victory over David Diaz made him the first Filipino boxer to clinch the world title at Lightweight. At this point, he held world titles in five different weight divisions.

It is obvious that Pacquiao was the faster and stronger boxer in this fight, where he dominated with big punches and cut Diaz’s eye in the fourth round. He eventually sent Diaz down to the mat with a jab and left hand.

In this fight, Pacquiao took on the Puerto Rican Miguel Cotto and emerged victorious. Winning it not only earned Pac-Man the Welterweight title, but also the special WBC Diamond Belt.

This Diamond Championship Belt is awarded to the winners of historic fights between elite, high-profile boxers. With such an impressive performance, we’re not surprised that he got it.

Pacquiao had obviously impressed his opponent, who praised him during an interview and said that he is “fearless, kind-hearted, and with the heart of a champion.”

Although ‘Pac-Man’ intends to leave the boxing world for good, we’re pretty sure he inspired and touched the hearts of many – and will continue to do so for a long, long time.