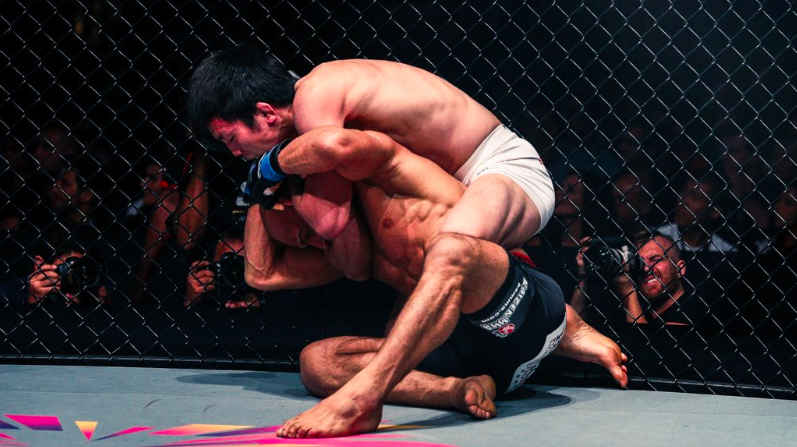 MMA Legend Shinya Aoki from the Evolve Fight Team knows that in order to get back to title contention, he has to string together a handful of impressive wins.

The 34-year-old lightweight standout from Tokyo, Japan is widely considered the greatest mixed martial arts product Japan has produced. Aoki boasts of an impressive 39-8, 1NC overall record that he has amassed competing for many organizations including ONE Championship, Dream, Deep, Strikeforce, Pride, Shooto, and one appearance at Bellator.

But despite his incredible experience in both the ring and the cage, Aoki still soldiers on and is a firm believer that the life of a true martial artist never ends.

“I would like to live my life to the fullest in 2018,” said Aoki. “I am always practicing year round. I am always ready. An athlete should be prepared for an offer at any time.”

The Japanese warrior returns to action in Singapore as part of the main card of ONE: Unstoppable Dreams which takes place this Friday night, 18 May at the Singapore Indoor Stadium. He takes on Russian Jiu-Jitsu and combat sambo world champion Rasul Yakhyaev in a three-round lightweight bout.

Yakhyaev was last in the cage against Thai dynamo Shannon Wiratchai in Bangkok. The Russian fighter won via unanimous decision, using his wrestling and grappling to outscore Wiratchai.

“I feel that Yakhyaev’s strengths are similar to mine. I will do my best to win, as always,” said Aoki. “I am always learning from every experience. I love that with martial arts, you are able to learn every day. It is the same as life.”

Aoki is a truly unique athlete in the sense that, victory or defeat does not truly define who he is as a martial artist. Aoki’s greatest focus is the constant pursuit of perfection, improving little by little each day, and testing his skills against the world’s best.

“I just want to compete. It doesn’t matter who or how,” Aoki states. “Both grappling matches and martial arts bouts are fun. I just like expressing myself as a martial artist.”

Make no mistake about it, Aoki’s greatest strength lies in the grappling department. In each and every one of his bouts, Aoki’s main objective is taking the fight to the ground where he can showcase his incredible grappling game.

Just how dangerous on the ground is he? While the Japanese legend has the ability to finish with a variety of maneuvers, let’s a look at the three most impressive submissions of Aoki’s mixed martial arts career.

Every fan who has ever followed mixed martial arts knows what a rear naked choke is, and what goes into executing this particular move. Traditionally, the arm has to go underneath the chin in order to cut off the circulation of blood and oxygen to the brain, causing an opponent to temporarily lose consciousness.

However, there is a slight modification of this maneuver that transforms it into a completely different submission altogether. Enter the neck crank — one of Shinya Aoki’s go-to moves.

The neck crank, also referred to as a neck lock or a cervical lock, is a multiple joint lock applied to the spinal column wherein the spine is tweaked ever so slightly beyond its normal range of motion. Aoki likes to use his forearms to cover an opponent’s nose and mouth when he pulls off this move.

In the video above, Aoki performs the neck crank against Lyle Beerbohm at Strikeforce in April 2011. Once the neck crank was locked in, there was no escape for Beerbohm who had no choice but to surrender defeat.

Reigning ONE Atomweight World Champion “Unstoppable” Angela Lee from the Evolve Fight Team recently made this technique incredibly popular, but it was her teammate Aoki who is one of the originators of the move fans fondly call “The Twister”.

It’s an extremely rare maneuver in mixed martial arts competition because the setup can be a little tricky and knowledgeable opponents are able to telegraph it quite easily. However, if executed smoothly by an expert such as Aoki, it can seemingly come out of nowhere.

The Twister is a sideways body bend lock, combined with elements of a neck crank, which involves clasping the head towards the shoulder while forcing the body towards the other direction. The effect is a painful twisting and bending sensation at the torso.

Aoki executed the Twister against Yuki Yamamoto at IGF – Inoki Bom-Ba-Ye in Japan back in December of 2014. Just under two minutes into the contest, and Aoki already pulled off the move on his unsuspecting Japanese foe.

Last, but certainly not the least, the ultra-rare Gogoplata is perhaps Shinya Aoki’s most impressive submission. As it is, the Gogoplata is already an extremely difficult move to pull off because of its highly technical nature. A lot of technique goes into the setup of this foot choke that it can only be executed by high-level grapplers.

In fact, only a handful of mixed martial artists have been able to pull off the Gogoplata successfully in professional competition. Aoki owns the distinction of being the only man to have successfully executed the Gogoplata twice — once against Joachim Hansen in December 2006, and then another time against Katsuhiko Nagata in 2008.

The Gogoplata is a type of foot choke that uses the shin bone to scrape along the neck of an opponent either from full mount or from guard. Utilizing a rubber guard, the legs are held very high on an opponent’s back. In one swift motion, the foot pops over the opponent’s head and moves swiftly under the chin. Two hands clasped behind the opponent’s head are then pulled down to complete the choke.

Aoki’s grappling greatness is truly a sight to behold. And this Friday night in Singapore, fans will get to witness this Japanese legend unleash his greatness once again.