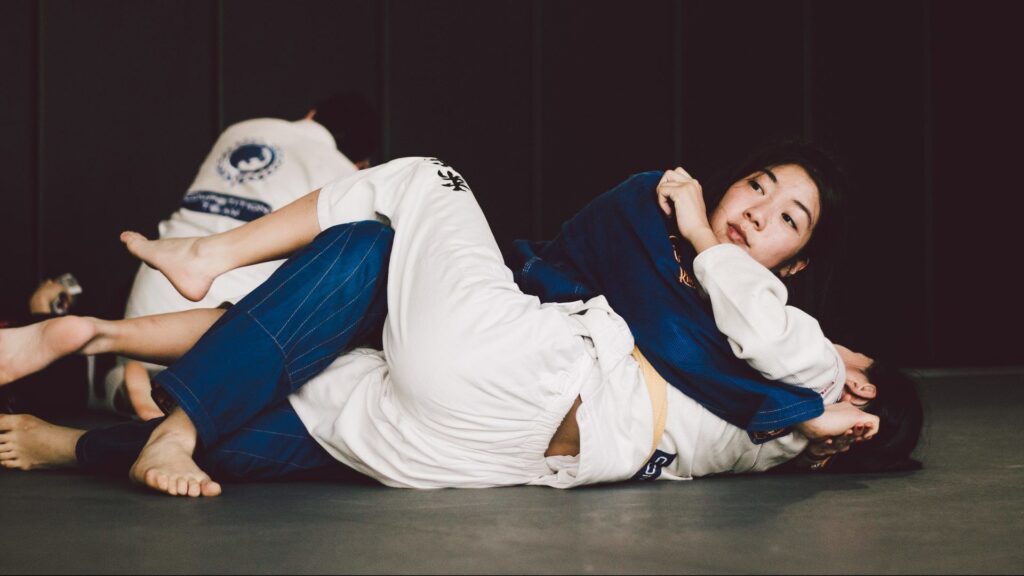 At its core, Brazilian Jiu-Jitsu is about turning the realities and expectations of a confrontation onto its head. It is an art built around allowing smaller and weaker individuals to overcome larger and more aggressive opponents through the use of proper techniques, misdirection, and leverage. The art teaches you that in order to accomplish this feat you must not do what comes naturally (usually physically resisting strength with strength) but instead use your opponent’s natural tendencies against them. BJJ requires you to step back and observe how you and others react to situations and to dissect and analyze these reactions. In the process, you become self-aware of how you use your body, and you begin to master both your physical and emotional methods and expressions.

Learning BJJ is a process of growth that manifests as much in the mental realm as it does in the physical. This psychological growth is integral, yet is rarely talked about outside of what it does for you in a fight or match. Many BJJ fighters won’t hesitate to tell you that the most significant differences BJJ made in their life took place outside of the mat.

We have compiled and organized the most common takeaways and tried to lay them out in a way that is approachable to someone new or uninitiated to the sport. So, without further ado, here are the five main ways BJJ will change your outlook on life:

1) Looks can be deceiving

Who would win? A male soldier or a relatively small female? A 500 lb behemoth or a fairly average sized fighter? Well, if the smaller opponents know BJJ, it is safe to say they have a pretty good shot. In fact, both of those are real examples (here and here) that went viral when the BJJ practitioner showed just how unimportant perception and assumption is to an actual outcome.

The biggest, strongest, most intimidating fighter will look like a child if a BJJ artist is able to bring them to the ground. The very first UFC event proved this when Royce Gracie came out on top of a bracket of accomplished fighters with very little difficulty. This same point would be proven again and again in MMA matches around the world.

Once you start training BJJ and you are manhandled by someone much smaller (or more out of shape than you) yet more experienced, you begin to realize that there is no way of telling the capabilities of someone just by looking at them.

Many fighters avoid confrontations outside of the ring precisely because they’ve learned that you never know exactly who or what you are dealing with. This translates outside of fighting as well. An experienced BJJ practitioner approaches most things with life with the understanding that you really have to test and try things before you can understand what they are like.

2) Learn to go with the flow BJJ World Champion and ONE Superstar Leandro Issa has been teaching BJJ in Singapore for 8 years.

One of the first, and most difficult, lessons of martial arts is learning how to adjust and adapt to situations and to use them to your advantage. Our natural instincts tell us to fight back in the same way we are being attacked – you push me, so I push you back – BJJ has refined the idea of expecting and working with an opponent’s energy rather than confronting it head-on.

Somebody wants to try and roll you? Okay, roll with him and use that momentum to give yourself the advantage. It is a simple concept that is insanely difficult to apply without thinking about it, and it transcends well beyond competition

Life is never perfect, and another problem is always just around the corner. BJJ helps you learn to adjust your mindset. Rather than avoiding the inevitable problem, you learn to adapt and adjust to it to minimize the adverse effects and maximize the positive. In many ways, this is the underlying aspect of many philosophies that try and promote happier and more fulfilling lives.

3) To get good, you must be willing to first be bad

Ego is something you just have to learn to let go if you want to learn BJJ. To get good enough to beat and tap out a skilled opponent, you have a long road of humbling defeats ahead of you. There really is no other way. When you understand this, you begin to realize that being bad at something is merely the first step to being good at something.

Perseverance, determination, and humility are all significant aspects of a proper BJJ practitioner.

4) Learning to teach, teaches you to learn

In most complicated or intricate martial arts, training your body through the motions is only half the battle. Without a deeper understanding of the reasons and purposes behind something, your ability to grow as a martial artist is extremely limited. Becoming adaptable and creative requires you to intellectually examine every movement inside and out. Teaching others is one of the fastest ways to give your understanding a swift kick in the butt. You learn to see things through new eyes and to realize new possibilities therein. It isn’t so much the teaching as it is the ability to empathize and put yourself in someone else’s shoes that provide the most significant benefit. Most BJJ practitioners will spend vast amounts of time testing and helping their peers for the mutual benefit this activity bestows.

This is a universal truth and can be learned in many intellectual activities, it just so happens that BJJ combines this intellectual pursuit that many types of people would typically shy away from, with a physical sport that encourages them to push their understanding deeper.

Many BJJ “Academies” are just that. They are centers that push academic learning in their chosen field – and with all academic pursuits, learning to learn is one of the greatest life skills given.

5) Being uncomfortable, tired, and frustrated can be a lot of fun

BJJ allows you to get a great full-body workout in while also learning how to defend yourself.

BJJ may be refined enough for even the elderly to practice safely, but it is anything but easy. When you give it your all, you will experience discomfort, exhaustion, and frustration (usually all at the same time) but at the end, you will likely find yourself smiling and making some of the best friends you’ve ever had.

Learning to accept the adversity thrown at you as part of reality, and finding pleasure in overcoming it, is one of the greatest gifts you could give yourself.

So, if you’re looking to learn more about life and level up yourself in and out of the gym, give BJJ a try. Sign up for a complimentary trial class today!