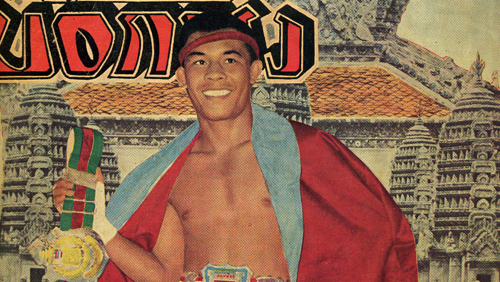 The term legendary tends to be overused when describing Muay Thai greats. But, when used in tandem with the name Apidej Sit-Hirun, it fits like a hand in a glove.

Widely regarded as the most powerful kicker in the history of Muay Thai, he is idolized by fans of the sport. And, for good reason. You see, Apidej displayed a type of masterclass which has yet to be outdone. The limited footage of his fights that we have access to is tantalizing, featuring top-notch skill combined with raw power.

Sit-Hirun broke records while he carved out his name into Muay Thai history books. This master of Muay Thai wasn’t just a wrecking ball, however, given his possession of amazing ring smarts and lightning-fast reflexes.

In this article, we will explore Apidej Sit-Hirun’s remarkable life and discover how he fought his way out of a poor village before transcending into the crown jewel in Muay Thai.

Apidej was born in the small coastal province of Samut Songkhram, not far from Bangkok, in 1941. The young, budding fighter was from a very impoverished background, leading him to begin training at 12 years old as a way of helping his family to escape their poverty. Apidej had already gained a reputation of being a tough little nut from fighting with the local kids and was subsequently encouraged to test his skills inside the ropes.

One day, Apidej’s father followed him to the gym as he wasn’t too happy with his son’s chosen career path. When he witnessed young Apidej knock his opponent out in the second round, he didn’t attempt to interfere any further in his son’s lofty ambitions. As the years rolled on, Sit-Hirun had carved out a reputation as a dangerous fighter on the local circuit, and he gained the nickname ”The Golden Leg”, due to his devastating round kicks which would become synonymous with his many victories.

Sit-Hirun was stepping up the ranks, and his confidence was growing alongside his win record. So, he decided to move to Bangkok, where he would seek out the best competition and chase down his dreams of glory.

Apidej exploded onto the Muay Thai circuit in Bangkok, and it wasn’t long before his destructive skills began to garner a wider audience. Buoyed on by his dreams of making it as far as he could in the sport, the ”Golden Leg” went on to seek out all the best fighters of his day. One of the most crucial fights in his career to date went down at the famous Lumpinee Stadium in June 1961.

Apidej took on the highly respected Danchai Yontrakit, and it was reported that the sound of his round kicks echoed around the stadium, thumping against the fighter’s legs and torso with a thunderous sound which made many onlookers shudder. Apidej won the fight, propelling his reputation further as one of the most powerful kickers Muay Thai.

The young man from the provinces became a sensation in Thailand and continued racking up the wins. Muay Thai is known as a tough sport, so it wasn’t total domination and Apidej had his fair share of losses too, such as his shock defeat to the knee specialist Adul Sri-Sorthorn.

It wasn’t long before Apidej exacted his revenge and he outscored Adul in the rematch with his famous round kicks settling the score. Throughout his career, he had a multitude of fights, and he won the vast majority.

The Man of Seven Titles

Apidej went on to fight and defeat all the Muay Thai greats of his time, and one of the most famous fights in his career would be against the hyper-aggressive Sompong Charoenmuang. He gained legendary status when his viciously powerful kicks broke both of Sompong’s arms.

Sompong was a well-respected and feared fighter, so this sent shockwaves through the Muay Thai world, but it didn’t stop other opponents lining up to take on the young warrior. Regular contenders such as the well renowned Dejrit Itti-Anuchit faced off against ”The Golden Leg” eleven times.

Apidej and Dejrit both took turns at winning and losing in their many long and arduous battles. Kongdej Lookbangplasoi also gets an honorable mention as he fought with Apidej on four occasions with both men beating each other to a pulp in what were highly memorable wars in the ring.

If it wasn’t enough to be a master of the ring in Muay Thai, Apidej was also an accomplished boxer and champion of the Professional Boxers Association of Thailand – another title to add to his ever-increasing record of accomplishments.

Between 1961 to 1972 Apidej picked up an impressive seven welterweight titles in both Muay Thai and International boxing, this earned him the new accolade of ”The Man of Seven Titles”, Apidej’s stunning record of  340 wins, 10 losses, and 1 draw is feat which has yet to be repeated; a jaw-dropping record by any standard.

Apidej Sit-Hirun is known as the hardest kicker in Muay Thai history.

The much-loved warrior went on to fight in some of the most memorable battles in Muay Thai history. Apidej eventually got married and decided it was time to hang up the gloves. His new career was beckoning, however, and he soon focused his attention on coaching.

The now-legendary figure became Master trainer at the Fairtex Muay Thai gym, and his vast array of knowledge and expertise helped develop a new wave of talented young prospects. From his retirement in his mid-30s, Apidej helped produce over 30 champions with fighters from all over the world training at his gym and lapping up his wealth of experience. The superstar was revered by his students, and his input was invaluable.

In the years which followed, he received numerous awards and accolades for his services to the Thai National Sport. Apidej was crowned ”The Fighter of the Century” by the King of Thailand and became the only fighter to receive a lifetime achievement award from the Thai National Museum.

Unfortunately, Apidej Sin-Hirun lost his final battle with lung cancer at the age of 72. Still, his legacy lives on through his amazing career and the massive impact he had on all who knew him. A bronze statue of the legend now stands proudly outside of the Huamark Stadium in Bangkok, Thailand.

The statue of ”The Greatest Fighter of the Century” Apidej Sit-Hirun is a reminder to one and all of the sheer brilliance of one of the greatest men to ever lace up gloves.