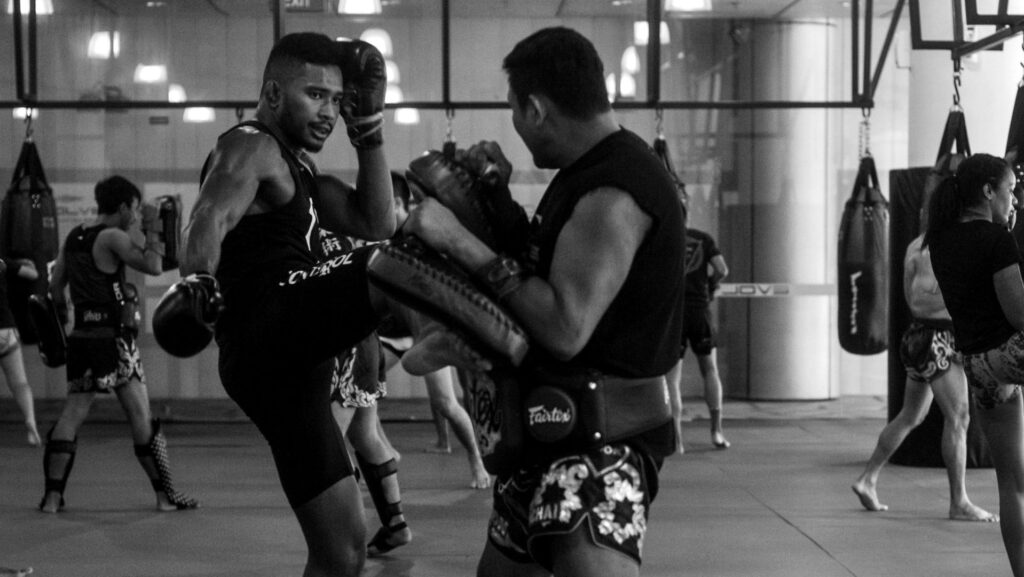 There are few things in life that are as self-defeating as fear. Fear prevents us from trying new things, achieving personal and professional growth, reaching our goals, and maximizing our potential. Have you ever wondered what you might achieve if you were able to reduce or eliminate this obstacle from your life? Fortunately, there is a time-tested, surefire method available that will put you on the fast track to fearlessness: martial arts training! Whether you mix it up on the mats in a grappling art like Brazilian Jiu-Jitsu (BJJ) or perfect your punches and kicks in a striking art like Muay Thai, you’ll soon find that the more you train, the less fear you’ll experience. Below are just a few of the many ways in which the practice of martial arts will make you fearless!

1) It builds your confidence

One of the biggest causes of fear is lack of confidence. To put it simply: the less confidence we have, the more fearful we are. Martial arts training remedies this problem in a number of ways.

Martial arts exposes us to uncomfortable situations. In BJJ, for example, practitioners train themselves to remain calm and focused in situations that most people would find highly stressful. In other words, they learn to become comfortable with the uncomfortable. The ability to remain calm under pressure is an extremely useful trait, and it results in more confidence and less fear to those who possess it.

The sense of achievement that martial artists experience is another way in which confidence is built, and fear is eliminated. There are a number of ways in which martial arts students experience achievement, including success in competition, progression through the belt ranks, and physical transformation. For some new students, simply making the decision to attend their first martial arts class is an achievement! Achievement means different things to different people, and no two people’s situations are exactly the same. What remains consistent, however, is the reduction of fear that is achieved through consistent achievement.

2) It makes you comfortable with physical confrontation

Most people, whether they’ll admit it or not, are terrified of physical confrontation. In fact, people will go to great lengths to avoid any form of physical pain in their lives. While physical violence is certainly something to be avoided, martial artists understand that, with proper training, it need not be feared. A major focus of most martial arts is preparation for unwanted violent physical encounters. Through consistent, safe, controlled training, martial artists grow accustomed to physically struggling with other human beings. This daily physical contact, whether experienced on the mats while grappling or during intense sparring sessions, prepares practitioners for the types of self-defense situations that they may encounter in the real world. A tremendous peace of mind is achieved by individuals who are confident in their ability to effectively defend themselves physically, and this mindset eventually results in the reduction or elimination of fear.

3) It strengthens your body

Physical weakness is a great source of anxiety for many people. Most small, weak individuals understand that they are more vulnerable to physical attack than their bigger, stronger counterparts. This knowledge can be mentally draining and fear-inducing. Fortunately, BJJ, Muay Thai, MMA, and a number of other practical martial arts are great ways to build functional strength and endurance. With physical strength comes confidence, and with confidence comes a reduction of fear. In addition, people who are visibly strong and fit tend to be treated with more respect than those who aren’t. In fact, studies have shown that physically fit individuals are perceived by employers as being more qualified than those who are visibly out of shape, and strong, healthy people tend to be seen as more attractive by potential partners than their unhealthy counterparts. In addition, criminals and bullies are less likely to target people who appear strong and confident. To put it simply: physical strength is an asset that can have a number of positive effects on one’s life.

4) It calms your mind

Not all fears are of a physical nature. In fact, studies have shown that many people actually fear public speaking more than death! While the practice of martial arts does not require you to make speeches or give presentations, it does confer a benefit upon its practitioners that is often overlooked: it forces social interaction. For extroverts, social situations are often enjoyable and pleasant. For introverts, however, social interaction can be terrifying. Through martial arts, many of which require close physical contact and communication with other people, introverted people usually find that their fear of social interaction gradually lessens. In fact, a number of introverts credit their martial arts training with helping them become more extroverted! Whether you are slightly shy or have a legitimate phobia, the social skills gained through martial arts training will ensure that you’ll no longer be held back by the fear of social interaction.

Fearlessness is a worthwhile goal for anyone interested in physical and mental self-improvement. If you’d like to improve your confidence, get in shape, and become a fearless warrior, sign up for a complimentary trial class today!