Self-defense skills are important to have, and everyone should have access to it. You never know when you could be forced into a situation to physically defend yourself and the people around you from harm.

These days more and more people are joining boxing gyms, Muay Thai gyms, BJJ gyms, and other types of martial arts gyms to keep them in shape and achieve their fitness goals. But the main reason people take up martial arts remains the same, and that’s to learn the science of self-defense.

Perhaps you’re looking to learn a few techniques so you feel more confident and safe that you can handle yourself in tense physical situations. Martial arts are great for empowerment, and everyone should have access to the knowledge of self-defense to equip themselves with the tools essential to survival.

Whether it’s learning how to throw punch combinations in boxing, diversifying your ground attacks with Brazilian Jiu-Jitsu, or learning how to immobilize your attacker with an inside leg kick, there are certain martial arts techniques everyone should have in their repertoire.

We’ve come up with a short list of martial arts techniques for you to practice and equip yourself with. In the absence of martial arts in Singapore during this circuit breaker period, you can learn martial arts even if you’re stuck at home. Train and practice these moves to learn how to protect yourself.

Muay Thai is a diverse striking martial art with a myriad of offensive techniques. It’s popularly called the ‘Art of Eight Limbs’ because it uses a combination of the hands, feet, knees, and elbows to subdue opponents.

One such Muay Thai technique that will help you greatly in self-defense situations is what we call the push kick or the teep kick. It’s a forceful kick primarily used to create separation and distance from your opponent as a setup for a follow-up kick like a roundhouse, or a follow-up punching combination.

In self-defense situations, the push kick should create enough distance for you to evade and flee a physical conflict. If performed with the correct technique, it will cause a knock-back effect, which will result in your attacker falling backward.

The push kick is an effective technique for self-defense and is easy to execute. With enough practice, you’ll be able to perform the push kick with maximum efficiency and effectiveness. 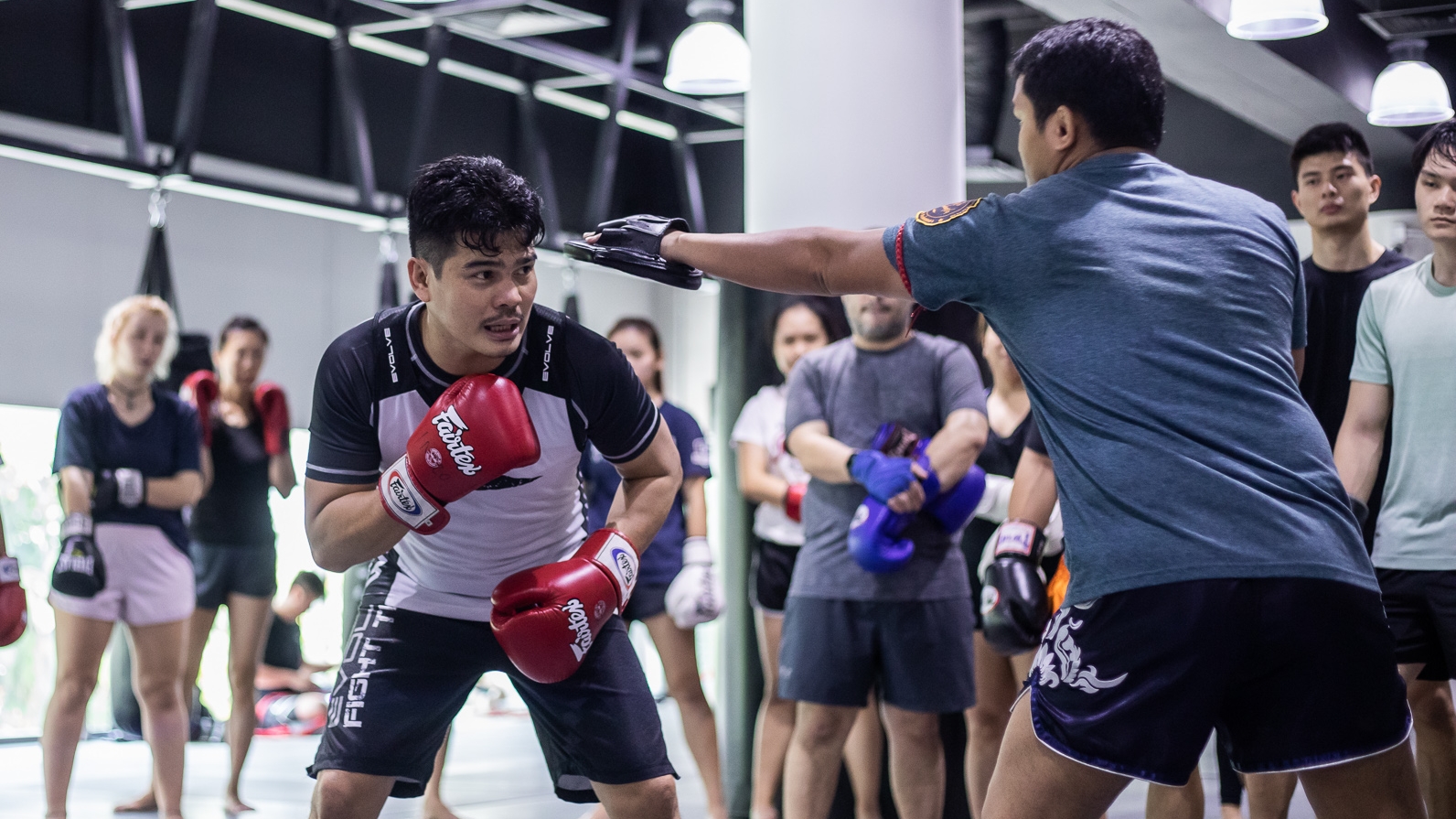 Boxing is a very effective martial art for self-defense, as the majority of real-world physical conflict starts standing up. One of the most effective boxing techniques has nothing to do with throwing punches but instead has everything to do with moving your head out of the way of them.

Attackers will usually throw a punch first, so you have to be prepared for it. By training your head movement and gaining the ability to slip punches, you can make slight adjustments that will bring you out of harm’s way, with enough time and opportunity to either land a counter punch, or flee.

Boxing is one of the most basic self-defense martial arts that you need in your repertoire.

The ultimate goal of self-defense is to de-escalate situations altogether by choosing not to fight. An end result wherein no one gets hurt, and everyone is out of danger is the best possible outcome. 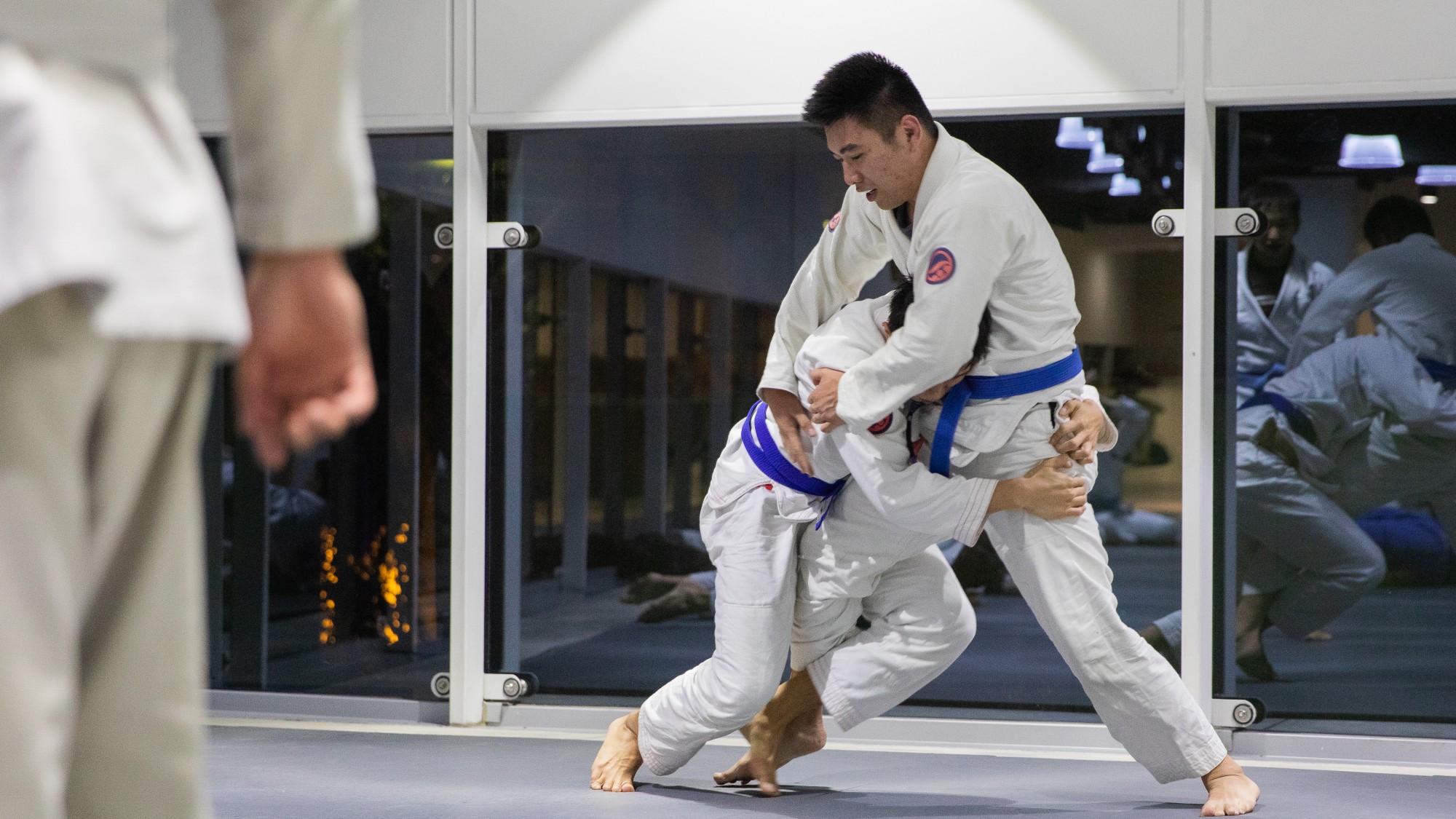 A student practices his takedowns during a BJJ class at Evolve MMA (Far East Square) in Singapore.

Wrestling and Brazilian Jiu-Jitsu are martial arts that aim to gain leverage over opponents by taking them to the ground. Once subdued on the ground, it’s easy to control the result of any fight.

As such, taking an assailant down and neutralizing any threat is an important self-defense skill to learn. One of the simplest techniques is the trip takedown.

In close quarters, using a trip takedown will effectively take any attacker down to the ground with relative ease, and as they least expect it. It can be performed in a swift, smooth motion. Once on the ground, you are trained to then restrain your attacker through a variety of holds that will nullify any physical threat and will bring you out of danger.

Of course, the standard response to any tense physical situation should always be to flee. Also, be wary of attackers who hold weapons. It would be ill-advised to come into close proximity.

Brazilian Jiu-Jitsu is a fantastic martial art and features a myriad of techniques that can be used in real-world self-defense situations. Assuming attackers can close the distance on you, and get into close proximity, BJJ will prove very helpful in a host of different scenarios.

If they can get near you, many attackers will often target your arms or wrists, and BJJ offers a variety of counters and escapes to this sort of situation.

Wrist locks are incredibly effective in BJJ and in self-defense. They can instantly subdue opponents, giving you enough time to either execute a swift counter-attack, or escape the situation unharmed. They do enough damage to incapacitate opponents, without causing any long-term effects.

Wrist locks are powerful, and best of all, low-risk and very easy to perform. With enough practice, you can effectively take out attackers with wrist locks in a safe and controlled manner.