A Beginner’s Guide To Footwork And Guards In Muay Thai 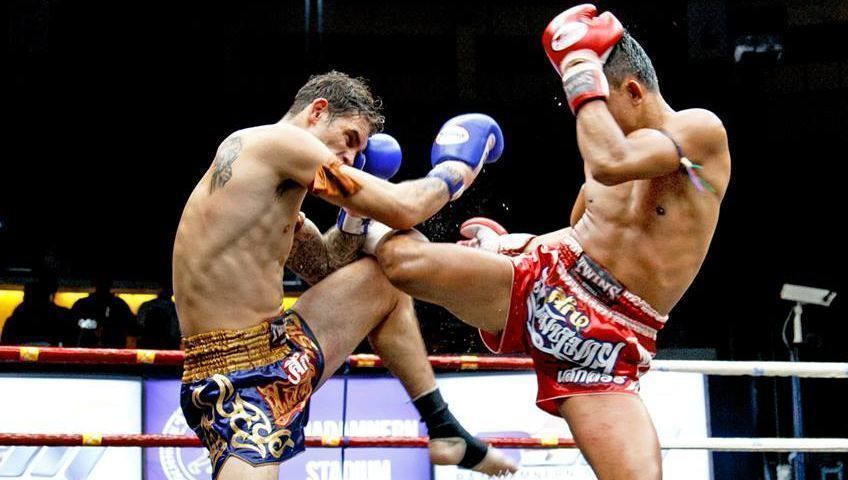 In Muay Thai, it’s all well and good having perfect technique, but what truly separates good fighters from great fighters is the ability to get yourself in the perfect spot to launch your attack. Having the right footwork, and learning to defend yourself against incoming attacks is essential.

To find the correct Muay Thai posture from which to both attack and defend, start by standing with your feet shoulder width apart. Depending on which is your strong side, you’ll want to step that leg back, i.e. if you’re right handed, right leg takes a step back, left leg stays forwards. Make sure that you don’t turn sideways, keep both your hips facing forwards. A mirror can help when you first start practicing this.

Your head and hand position is the next thing to consider. You’ll want to place both hands up in front of the face at about eye level. This is your guard. Behind that make sure to tuck your chin downwards, this will protect it from incoming strikes. This is the position you throw all your strikes from, and whenever you throw any strike, you will return to this position, ready to defend if need be. At first, you’ll notice your shoulders getting quite tired and keeping your hands up will be hard, but over time you’ll build up the strength to keep them up round after round.

A variation of this tighter guard is the long guard, a hand position very common in Muay Thai. Instead of keeping both hands close to the face, you can extend them a little towards the opponent, almost as if reaching towards them. Your lead hand should extend a little further towards your opponent, creating something of a frame between you. Practice switching between both as each offers different opportunities and problems to solve.

Moving around the ring

Unlike walking around in day to day life, to move around the Muay Thai ring you need to maintain perfect balance at all times. That being said, to move forward, backwards, left and right you need to make sure never to cross your feet. Doing so will make you vulnerable to attacks. To move in any direction, start by using the leg that is facing that way. So to move forwards, step with the lead leg, and shuffle the rear leg to follow, maintaining the same posture. Try watching videos of different fighters and how they move. Everyone moves slightly differently, but there will be commonalities between each.

The best method for practicing Muay Thai footwork in relation to your strikes is shadow boxing. In this way you can move around in the space, work on firing shots and returning to guard, and also practice blocking attacks, all in real time.

The simplest and most effective form of defense is to shell up behind your gloves and forearms. Cover your face with your palms and rest your knuckles on your forehead to create something of a shock absorber between you and your opponent’s strikes. When you first defend in this way, it may just feel a bit like hiding behind your hands. Don’t worry too much about how it looks, it’s the classic response to incoming fire.

There are many types of defenses in Muay Thai and all take time to master. To understand any of them, you need to understand the blocking defense first. It’s the quickest, safest, and most energy efficient style of defense available to you at any given time. A tip for this guard is to make sure the hands rest on the head, not away from it. If your hands are not placed on the head, your opponents punches may still slip through. It takes a while to feel comfortable in the chaotic mess of punches and to remain calm behind your gloves, so be patient!

It’s also important not to forget the legs! Any kick to your legs and your body can be defended with what is commonly referred to as a “check”. To check an incoming kick, simply raise your shin as a barrier for your opponent to strike, instead of your body or thighs. It may sound daunting to clash shin to shin but it’s a fundamental part of Muay Thai. With practice and repetition, blocking strikes with your shin quickly becomes the norm. Make sure your shin is completely vertical, perpendicular to the floor and flex your foot, strengthening your posture and balance.

The great Muay Thai trainer Panya Kraitus once said “The hallmark of Thai arts in whatever form is the inherent grace and beauty. Thai boxing is no exception.” Perhaps the epitome of this style and grace is the Yang Sam Khum style of footwork, also referred to as the three strides movement. Most commonly seen in the opening “dance”, the Wai Kru, before the actual bout takes place, the Yang Sam Khum movement is actually a legitimate part of the footwork in Muay Thai competition.

The first thing to understand about this style of footwork is that you never want to stand completely still during a match, or sparring. Once in your stance with your hands up in guard, you should lift each foot off the floor in alternation, almost as if the floor is hot and you’re stepping to avoid burning your feet. This isn’t done quickly mind you, but rhythmically, more like a heartbeat. In fact, if you’ve ever watched a full Muay Thai fight, you’ll notice the rhythm closely matches the music often played during each match.

This style of footwork can also be used to walk forward and advance on an opponent. To do this, after establishing the rhythm, each third step you want to bring your rear leg to the front position, essentially switching stances. Continue advancing in this manner, switching stance each time. To add extra “grace” to the movement, you can exaggerate the switching of stances by raising the knee as you step, almost like blocking a kick.

Not only is this form of movement traditional, it’s also effective. You can cover a lot of ground very quickly in this manner, and remain balanced and protected from most strikes as you do so. It’s also a good way of setting up a quick teep, should your opponent try and get too close. It’s tricky, to master and it’s a good idea to observe it as much as possible being used by the professionals, before trying it in shadow boxing and sparring practice.

Defense and footwork are paramount to being a great Muay Thai fighter, and you should invest as much time practicing and learning these methods as you would any other punch, elbow, kick, or knee. Your greatest asset for learning these is a good training partner. Work together to improve each other’s weak areas of defense and you’ll be positioning yourself to be a much more effective Muay Thai fighter in no time.

How To Pick The Best Muay Thai Shorts

If you’re going to train Muay Thai, you need to come equipped with the correct shorts. You can get away with turning up to your first few classes in run-of-the-mill sportswear, but you’ll soon want…

Why Muay Thai Is More Than A Weight Loss Tool

Throwing kicks and punches uses up a lot of energy, and fitness experts have caught on to that reality. That’s one of the reasons why you see all sorts of cardio kickboxing and boxing classes…