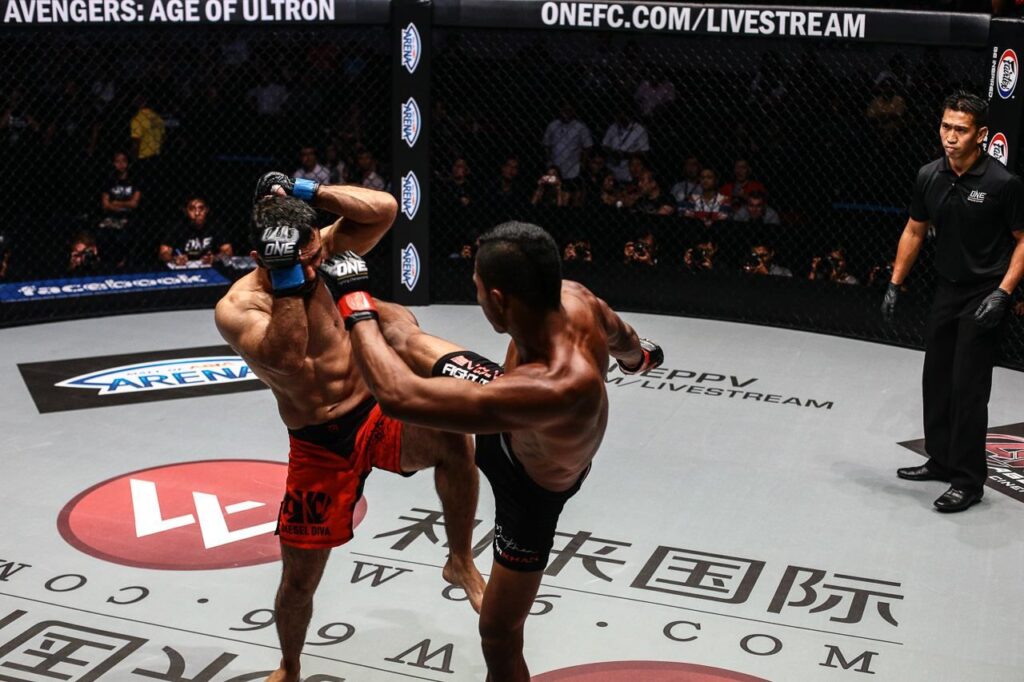 In the world of combat sports, knockouts never fail to bring audiences to their feet. And in Mixed Martial Arts (MMA), there is no doubt that knockouts and finishes occur more often compared to most combat sports.

Over the past few years, ONE Championship has been providing fans with some of the most exciting knockouts and finishes ever seen in the sport. So today, Evolve Daily gives you the Top 8 Knockouts in ONE Championship:

There’s no better way to kick off this list than with the Yahoo Sports’ MMA Insider Year End Award winner for Knockout of the Year. Clinching against the cage is a good way to limit an opponent with good striking. But when that opponent is a three-time Lumpinee Muay Thai World Champion, doing so might not be such a good idea after all.

That’s exactly what happened here and Evolve Fight Team’s Dejdamrong Sor Amnuaysirichoke made sure Rene Catalan paid for it with a crushing Muay Thai style knee to the ribcage.

Top Singaporean prospect and Evolve Fight Team’s Amir Khan has been wrecking up some impressive stoppage wins ever since his ONE debut. In just his second fight in ONE, the 20-year old proved once again just how dangerous he can be as he knocked Waqar Umar out cold with a series of devastating elbows.

Evolve Fight Team’s Eddie Ng is undoubtedly one of the most exciting fighters to watch in Asia. Back in 2011, the Hong Kong native claimed his first victory under ONE Championship in style when he knocked out Yuan Chuan Bo with a flurry of punches on the ground.

Japanese MMA veteran and former Pancrase Lightweight Champion Koji Oishi was offered an immediate title shot against then reigning ONE Featherweight Champion Honorio Banario when he signed with ONE. Oishi was losing the fight before coming back in the second round to claim the title in spectacular fashion with a one-punch knockout.

Cameroonian-born kickboxer and four-time Muay Thai World Champion Alain Ngalani is a 229-pound heavyweight known for his speed and trademark move “The Panther High Kick”. This spinning heel kick he used to knockout Mahmoud Hassan in his ONE debut showed just how fast and dangerous he really is.

Ev Ting is currently en route to becoming the first Malaysian to challenge for a ONE Championship title. In his second fight for ONE, the 25-year old fighter battled Filipino Edward Kelly in an exciting back-and-forth fight before knocking Kelly out in the second round with a well placed high kick.

Did you know that 5 of these knockout artists will be fighting on 22 May at ONE: Warrior’s Quest at the Singapore Indoor Stadium? With so much firepower, ONE: Warrior’s Quest is certainly promising to be a night filled with more explosive knockouts and finishes. Get your tickets online at Sports Hub Tix.