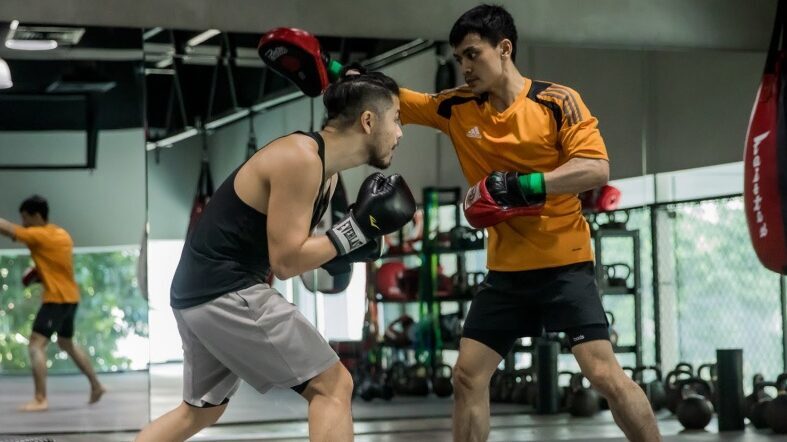 Head movement is an integral part of both offense and defense in boxing. It can render you unpredictable in the ring, and give your opponent a difficult read on your movement and what you plan to do next. On the defensive end, it can make you a moving target, elusive, and hard to hit.

The objective is to keep constant head movement — side to side, forward and backward, bobbing and weaving, slipping left, slipping right, and the like. Movement should be erratic and both preemptive and reactive. If an opponent throws a punch, you must have the ability to evade it ever so slightly.

The head houses critical contact areas like the chin, jaw, or temple. By constantly moving your head, you can protect these areas, or at the very least, minimize damage when you do take punches. Elite-level fighters and pros employ erratic and unpredictable head movement to stifle their foes in the ring.

If you’re looking to improve your quality as a fighter, then upgrading your head movement is a great place to start. There is a myriad of ways to train and improve your head movement, a variety of drills you can perform to really integrate it into your game. We’ve whittled it down to a list of drills we believe will help you hone this very important skill.

1) Shadowbox In Front Of A Mirror

Shadowboxing is one of the most basic drills in training. It’s probably the first drill you learn as a beginner. At the same time, it’s a drill that has its place even in an advanced fighter’s training regimen.

There’s a great reason for that, and it’s because shadowboxing allows you to fine-tune your techniques and movements, while training your mind to deal with certain situations you may face in the ring. Of course, this drill is incredibly effective in training your head movement.

Shadowboxing is made even more effective as a training tool when done in front of a large mirror, where you can see your movements from a different perspective. Practicing in front of a mirror will allow you to catch any mistakes you are making in your form and execution. You can see clearly what you’re doing and make corrections on the spot.

2) Use The Double-Ended Bag

The double-ended bag is one of the most versatile and useful pieces of equipment in the boxing gym. It’s a great tool for improving your hand speed, hand-eye coordination, punch timing and precision, and combination punching. In addition to its main benefits, the double-ended bag can also help you improve your head movement.

Aside from this, the double-ended bag can also promote the use of angles and improve your footwork, as well as encourage you to punch in volume.

Foam noodles are cylindrical in shape and usually made of polyethylene foam. It is hollow in the middle and is lightweight, durable, and easy to wield. Although they were originally made for floatation in the swimming pool, foam noodles have made their way to boxing as a useful tool to practice combination punching and head movement.

Working with a sparring partner or an instructor, you can use foam noodles as an alternative to focus mitts. While focus mitts usually focus on rhythm and power, foam noodles have a distinct focus on improving head movement speed and reaction times. Because foam noodles can be flung around faster, it trains practitioners to move their head faster as a result. Last but certainly not least, one cannot underestimate the importance of sparring as a training tool to hone all boxing skill sets, including head movement. Sparring is the only way you can truly emulate the actual ebb and flow of a real fight, albeit in a controlled environment.

When you spar with a partner or with a coach, take time out to specifically work on head movement. You can have your sparring partner exclusively on the offensive, while you try your best to evade attacks by moving your head. Try it out in different situations — at the center of the ring, against the ropes, in the corner, in close quarters, and others.

Sparring will get you ready to put your head movement skills to use in a real fight, so take it seriously.

The next time you’re in the gym, focus on improving your head movement and train yourself to become very hard to hit.