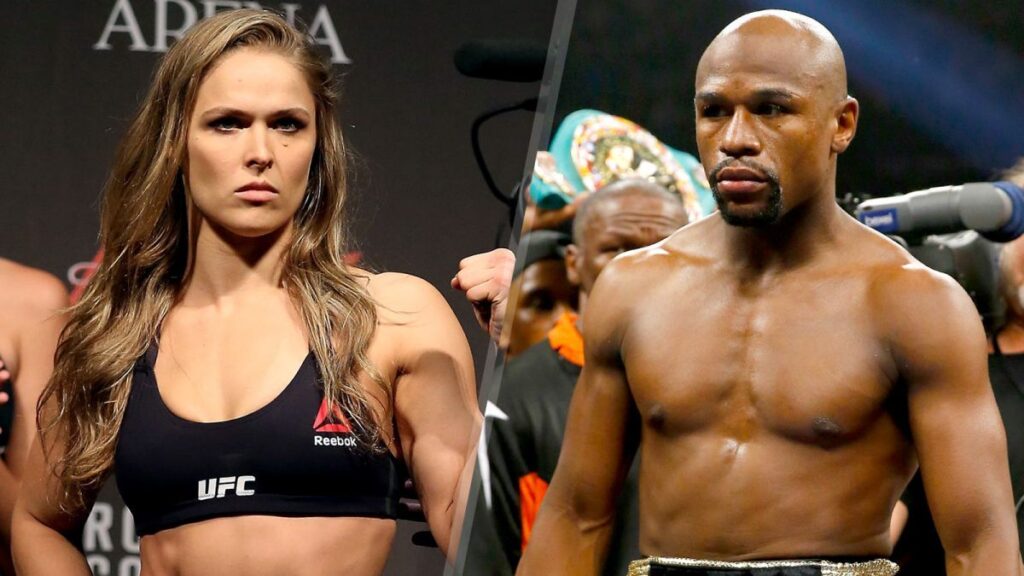 Of all the potential super fights that exist in the world today, the possibility of a fight between UFC Women’s Bantamweight Champion Ronda Rousey and undefeated Boxing kingpin Floyd Mayweather may very well be the most talked about right now.

It all started when Rousey slammed Mayweather for his history of domestic abuse after she took home the ESPY for Fighter of the Year, saying “I wonder how Floyd feels being beaten by a woman for once.” More recently, during a recent fan Q&A on Reddit, Rousey suggested that she could beat Mayweather in a “ruleless fight”.

Since then, many fans and fighters alike have rallied behind Rousey’s claim against the self-proclaimed greatest boxer of all time. Even UFC Interim Featherweight Champion Conor McGregor has jumped on Rousey’s side, saying “Ronda would dismantle him in seconds – 100 percent.”

It’s really not hard to see how “The Baddest Woman on the Planet” could indeed “dismantle” Mayweather in a no holds barred type of fight. So today, Evolve Daily gives you 7 Reasons Why Ronda Rousey Would Beat Floyd Mayweather In A Street Fight:

1) She’d start it off with a no-rules style groin shot. Let’s get straight to the point and talk about the biggest advantage Rousey will have against Mayweather in a street fight – a shot to the groin. Yes, there’s definitely nothing more debilitating to a man than a groin attack. A powerful blow to that area would leave any man living on God’s green earth cowering on the ground, paralyzed in unimaginable pain. And with all the beef Rousey has with Mayweather, you can be sure she’ll be looking to inflict as much pain as she can on this particular opponent. It’s pretty obvious which fighter is going to feel more comfortable in a street fight. Previously marketed as “Ultimate Fighting” and “No Holds Barred (NHB)”, the sport of Mixed Martial Arts was specifically made to simulate a real-life street fight as accurately but as fairly as possible. While undoubtedly effective in its own right, the sweet science of boxing is limited to just the use of the hands with strict rules. In a street fight, anything goes, and the current queen of MMA would most certainly have a much bigger advantage. There’s no denying the fact that Mayweather is a master technician and defensive genius in the boxing ring. He uses his near perfect footwork to move around the ring as efficiently as possible, dodging and avoiding his opponents’ attacks. From there he picks his opponents apart with fast, sharp and precise punches. Rousey would definitely have a ton of trouble trying to deal with Mayweather in boxing range.

But any MMA fan would know that there is no need to stand and trade in a street fight. A simple shoot for a takedown or pressuring forward into a clinch would solve all those range issues. And we all know what happens when Rousey manages to get in close with her opponents. Ronda Rousey knocking out Sara McMann with a crushing knee in the clinch at UFC 170.

In a boxing match, Mayweather has the perfect solution to deal with aggressive fighters who manage to get in close – clinching, or “hugging”, as some have come to call it. And we all know how Mayweather loves to use this to his advantage. But in a street fight, there won’t be referee there to force a reset or even warn him for “hugging” too much. The fight would simply continue in the clinch.

For Rousey, clinching is the perfect opportunity for a Judo throw or as her fight with Sara McMann at UFC 170 has shown, a thousand knee strikes to the gut; a sure way to get Mayweather thinking twice about clinching anyone ever again.

5) She’d toss him into oblivion within seconds. Miguel Cotto lifting Floyd Mayweather off his feet during their 2012 bout at the MGM Grand.

If there’s anything that Ronda Rousey and Floyd Mayweather have in common, is that both won the bronze medal representing the U.S. at the Olympic games – Rousey in Judo, and Mayweather in boxing. That means that once she gets her hands on Mayweather, we can all expect the boxing champion to be flat on his back in record time.

Rousey is a multiple-time Judo champion with 4th degree black belt. She has made quite the career out of throwing her opponents and sometimes even men around with her elite level Judo.

6) She’d break his arm 7 different ways on the ground. Though she isn’t known for her Brazilian Jiu-Jitsu, many would agree that Rousey is an even bigger nightmare on the ground. She has won 11 of her 12 fights in the first round, and nine of those 12 wins were by armbar. There’s not been a single fighter who has been able to survive Rousey’s armbar, and it’s highly unlikely that a boxer who knows nothing about fighting on the ground would experience anything different.

7) She’d finish him off with a nice ground n’ pound. Ronda Rousey finishing Alexis Davis off with a series of right hands after a beautifully executed throw.

If there’s anything Rousey’s fight with Alexis Davis has shown, is that Rousey has a pretty mean ground n’ pound as well. Though she prefers going with her signature armbar submission, she can still knock anyone out with punches if she chooses to. And she definitely wouldn’t stop punching Mayweather on the ground in a street fight until she sends him to la la land.

Although this fight would probably never happen, it’s easy to see why so many believe that Ronda Rousey would demolish Mayweather in a street fight. As one of the most dominant female athletes of all time, she’s just too good at what she does!