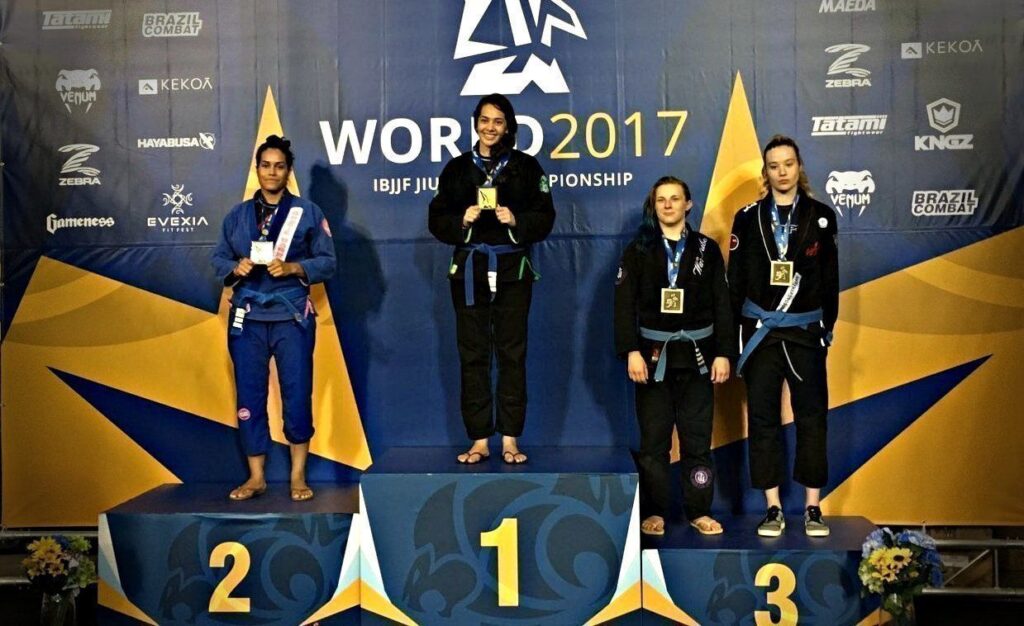 After receiving a gold medal at BJJ’s most prestigious competition, 30-year-old Barbara Katter admits that being called a World Champion feels weird. As weird as it feels for Barbara, being able to achieve what she has is certainly no easy feat. But then that’s Barbara – she makes the toughest rolls and competitions seem effortless.

Anyone who’s trained with Barbara would say that she is one of the hardest working students on the mats. She’ll roll with anyone (regardless of his/her size and belt level), attend multiple classes a day, six days a week, and occasionally, she’ll casually mention that she’s competing. But underneath this cool, calm, and happy exterior is a competitor with serious ambitions. Barbara trains 6 days a week, even during the off-season.

Barbara admits that she had never started training Brazilian Jiu-Jitsu with the intention of becoming a World Champion. Instead, she thought of BJJ as an outlet from stress at work, where she does business management for a trading floor. “When you’re rolling, you need quite a lot of focus, so everything else fades away. So with a clearer head, it is easier not to sweat the small things,” explains Barbara, “After class, I no longer had the same worries, and I also had a much healthier perspective on things that were previously causing me stress.” Barbara also became a lot fitter than she had in years, gaining muscle and losing almost 10 kilos in the process.

Training Brazilian Jiu-Jitsu also encouraged Barbara to step outside of her comfort zone. After experiencing the challenges of changing her game and trying new techniques, she knew that she had to do something else to get better. And for Barbara, that something else was competing. “In the gym, you get to learn the games of your teammates, and they learn yours. This is great because it forces you to keep learning,” says Barbara, “But testing your techniques against someone who you know is going 100% is different.”

Because of her desire to take on new challenges, Barbara decided to test herself once more after coming up short in the Abu Dhabi World Professional Championships. ”I made some mistakes that I wanted to fix and see where that would take me,” shares Barbara, “I also felt like I let my teammates and professors down a bit by not performing my best and I wanted to fix that. And I thought the best way to do that was to compete at the Worlds.”

To train for the Worlds, Barbara credits her professors for teaching her new techniques and refining the ones she already knew. “They encouraged me through rolling and smashing me on the mats, and sometimes shared positive words to motivate me,” says Barbara. “My teammates and friends helped me too. They kept me on my toes, helped me test out scenarios and kept me sane.” She gives special credit to Evolve MMA BJJ head instructor Leandro “Brodinho” Issa for not only helping her fix her techniques but also helping ensure that she was training seriously with a competition mindset, focusing more on positions and points than just submissions and helping fix her mistakes. Barbara’s favorite submission is the bow and arrow choke.

On the day of the competition, Barbara felt calm and composed, ready because she knew that she had trained as much as she could and was as ready as she could ever be. Before she knew it, she was in the finals. “I didn’t really have time to be nervous. I just finished the semi-final match a few minutes earlier, and at that point, all my energy went into trying to recover from that match,” explains Barbara. “In the finals, I was losing most of the match by an advantage, but I think it was only in the last minute that I got points for a sweep. Seeing the clock count down the last few seconds was a mix of feelings – relief and shock,” she said. In fact, Barbara was so shocked that the feeling of winning didn’t really sink in until she stepped on the podium.

Not only has Barbara earned a gold medal, she has also earned the admiration and respect of all of her teammates and instructors. With her performance, she has proved that hard work and the determination to challenge oneself to be the best martial artist one could be is undoubtedly worth it.

Want Barbara’s advice to become a World Champion? “Work hard, train as much as possible, challenge yourself, compete when you have the chance, and realize that though you step on the mats alone, you need a team to get there. You need training partners to motivate you, you need professors to teach you, refine your technique, challenge you, and help keep you focused. So train with the intention of improving a little every day but don’t forget to have fun and give back in the process” Barbara says. We don’t doubt that her advice works.

From all of us at Evolve Daily: congratulations Barbara!