Muay Thai is truly one of the most beautiful martial arts known to man. Rather than being a mindless expression of brutality, Thailand’s national sport is a way of life for many of its exponents.

Observing true practitioners exhibit the art of Muay Thai can be poetic, at times. However, unlike an arrangement of flowery, rhyming language, the expression of the “Art of the Eight Limbs” can often be hard to receive. Especially, that is, if you are fighting against an opponent who understands how to get the best out of their training.

For the flowing, graceful style of the Muay Femur (Technician), there is the hard, relentless approach of the Muay Mat (Heavy Puncher). Muay Thai is a sport that allows for the perfect union of beauty and brutality as it is multi-dimensional by nature.

A short, stocky, and aggressive fighter can enter the ring against a taller, lankier, and more calculated opponent and compete in two distinctive styles. One guy can push forward with the momentum of a freight train while the other manipulates their movement to avoid shots while returning kicks like rapid gunfire.

The most incredible part of this is, of course, that both of these practitioners are fighting under the same discipline – Muay Thai.

What makes Muay Thai such an outstanding striking art is the efforts the great fighters in history had to being the best. When it comes down to unarmed combat, the number of weapons a fighter has at their disposal usually dictates how successful they will be in competition. As Muay Thai fighters are stocked with the use of their fists, elbows, knees, and shins, they are certainly capable of winning a fight in a number of different ways.

This certainly gives a Muay Thai fighter a great advantage over other strikers such as Western boxers or Taekwondo competitors. The ability to use the fists and elbows in short-range combat, in addition with teeps and leg kicks at mid-range gives a purveyor of Muay Thai the weapons to damage an opponent in any scenario. Head kicks, flying knees, and spinning back fists are excellent mid-to-long range strikes for any fighter to master. 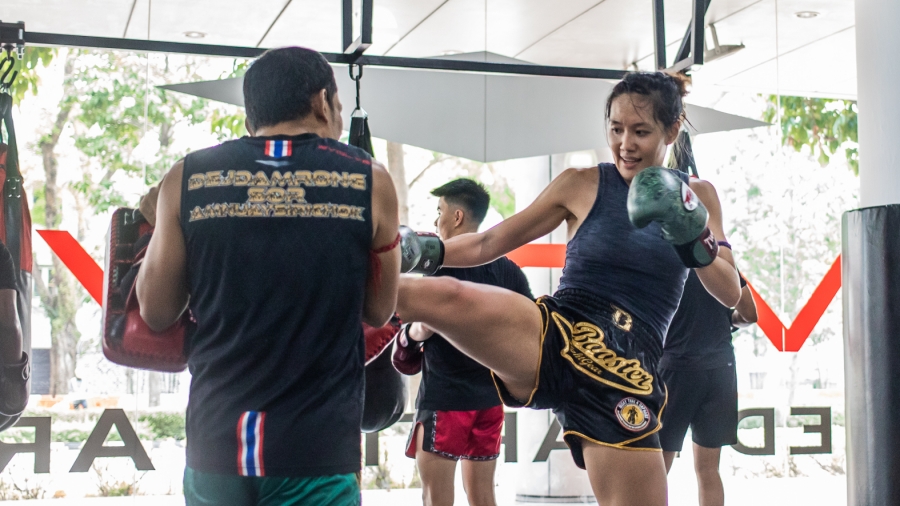 The accuracy that a Muay Thai fighter can develop through countless hours of drills and practice – in addition to the toughness they build up over round after round of sparring – creates a warrior that can dominate those of similar experience levels in other disciplines.

The Muay Thai clinch is another dangerous prospect for any fighter battling a practitioner of this incredible martial art. Any Muay Thai fighter worth their salt will invest years into devising a clinch game that can stand up to that of any other fighter inside the ropes. From inside the clinch, a Muay Thai practitioner can cause serious and devastating damage.

The Complexities of Muay Thai

Throughout the course of a Muay Thai class, you will practice kicks, knees, elbows, and punches.

The intricacies of Muay Thai may lead to some confusion at first, but make no mistake, these are where the beauty of this sport resides.

You see, this ancient art has been honed over centuries – and passed down through generation after generation – with multiple interpretations leading to its evolution. Depending on the region of Thailand you are in, you might find that there is a particular appreciation for particular methods or styles when it comes to this comprehensive martial art.

The style of the south of Thailand is known as Muay Chaiya, for example, while the eastern style is known as Muay Korat (or Paak Eesaan). While explaining the stylist differences between the different ancient styles is something for another day, we would encourage any budding Muay Thai student to consider how these different influences led to Muay Thai becoming such a comprehensive martial art.

When Muay Thai as a sport was codified in the early 20th century, these antecedent styles were combined to create the most effective striking art known to man. From here, various Muay Thai styles were exhibited for fans in major stadiums around the country, with the world-famous Lumpinee and Rajadamnern venues hosting some of the greatest fights ever seen. A student kicks the heavy bag during a Muay Thai class at Evolve MMA (Far East Square) in Singapore.

Throughout the years, many students and observers of martial arts have debated the effectiveness of particular striking disciplines in self-defense or cross competition. For decades, the legitimacy of arts such as Karate, Wing Chun, and Kung-Fu – when faced with Muay Thai or Boxing – have been pondered.

With the rise of mixed martial arts (MMA) we have seen the rapid evolution of a sport that is, by its nature, a blend of the most effective martial arts on art. It is perhaps no surprise that the majority of mixed martial artists rely on Muay Thai as their main striking base when entering the Octagon. Why? Well, its effectiveness certainly has a lot to do with it.

While wrestling and BJJ offer the mixed martial artist the abilities to take down fighters, grapple, and assert dominance on the ground, Muay Thai provides the same fighter with an extensive arsenal of weaponry on the feet. Boxing is an important part of MMA, but unlike Muay Thai, the ability to target the opponent below the hips is something that a boxer will not be well versed in.

When faced with an opponent, the use of punches, elbows, numerous kicks, knees, and a solid clinching game – something that is absolutely crucial to a mixed martial artist’s chances of success – gives the MMA competitor the edge. As we have seen over the past few years in the sport, the fighter with the best balance of striking and ground skills usually has the upper hand in a fight. For this reason, Muay Thai is highly revered by competitors from the UFC to ONE  Championship and Bellator.

Muay Thai Will Continue to Evolve The more you stick to your fitness routine and go to the gym, the more it becomes a part of your lifestyle.

With more and more fighters gravitating to Thailand’s national sport – not just as a striking discipline but as a way of life – we can expect Muay Thai to continue to evolve.

As it stands, there is no striking art on the planet that can come close. With fighters continuing to unlock the secrets of Muay Thai and becoming fitter, faster, and stronger as time goes on, we could see this incredible sport go to some pretty special places.

If you want to experience first hand the power of Muay Thai, sign up for a complimentary trial class today!