Here’s Why Respecting Your Opponent Is Vital In Martial Arts On the surface, it may seem that martial arts is a purely competitive sport, where one aims to emerge triumphant over an opponent. But beneath the surface, it is so much more than that. Martial arts carries deep meaning in all aspects — from preparation to meditation, to the actual competition.

As such, there are a host of prevalent principles that govern the multiple disciplines — things like honor, integrity, and courage. One such principle is that of respect.

Respect is extremely important, not just in martial arts, but also in life. Respect means that you accept a person for who they are and what they represent, that they are different from you or similar to you, and that every individual is unique in their own regard. By celebrating our differences as human beings, we become better martial artists.

Respecting our opponents is of the utmost priority. By showing our opponents respect, we are better able to gauge their capabilities, appreciate their journey as well as our own, and create an unspoken bond between martial artists.

Let’s explore why respect is such a critical trait to develop during training. Today, Evolve Daily shares four reasons why respect shown for opponents is important in martial arts.

1) It keeps you in tune with your own abilities Respect is one of martial arts’ core values.

Martial arts isn’t just a physical sport, it’s very heavily invested in the mental aspect of combat. In many ways, bouts can be likened to a game of chess. Every technique is calculated, every movement serves a purpose.

In competition, knowledge is power, and developing a sound strategy based on how your strengths play to your opponent’s weaknesses is key. You can’t just go in there without a sound game plan. At the highest level, strategy draws a fine line between victory and defeat.

From a purely competitive standpoint, strategy is what you should be focusing on. Furthermore, it is important to understand where your opponent is coming from. This should also give you a window of understanding and keeping in tune with your own abilities.

2) It shows acknowledgment for your opponent’s own life journey ONE Superstar Christian Lee from the EVOLVE Fight Team is as respectful as they come.

Just the same as the martial arts journey you have been traversing, your opponent has gone through the same trials and tribulations. As martial artists, we must always show respect towards each other’s life journey.

Respect is such an important part of martial arts, and acknowledging others’ hardships is one way to show compassion towards your opponent. You’re standing across the mat from your opponent, both of you being brought to this moment for different reasons.

By bowing your head down, it is a sign that you both acknowledge and respect each other’s martial arts journey. This is the first step to a match because respect reigns above all in competition.

Show respect to your opponents, and then give it everything you have. Putting your whole heart and soul into your performance is also another way to show respect.

In the martial arts world today, especially in the industry of mixed martial arts, too much focus is being placed on bravado and trash-talking, that the concept of respect gets thrown completely out of the window. This certainly should not be the case, especially if you consider yourself a true martial artist.

Sportsmanship is something that every true martial artist should be capable of exhibiting. It denotes that an individual can be gracious in both victory and defeat. That, in true martial arts, all that matters is the knowledge we acquire from our journey.

Respect is one of the most important components of sportsmanship. The absence of respect will make it extremely difficult to achieve the desired level of sportsmanship. Furthermore, respect helps to maintain the prestige and honor of martial arts which are two very important characteristics.

Showing respect towards your opponent is the first step to being a good sportsman.

4) It allows you to learn from the experience 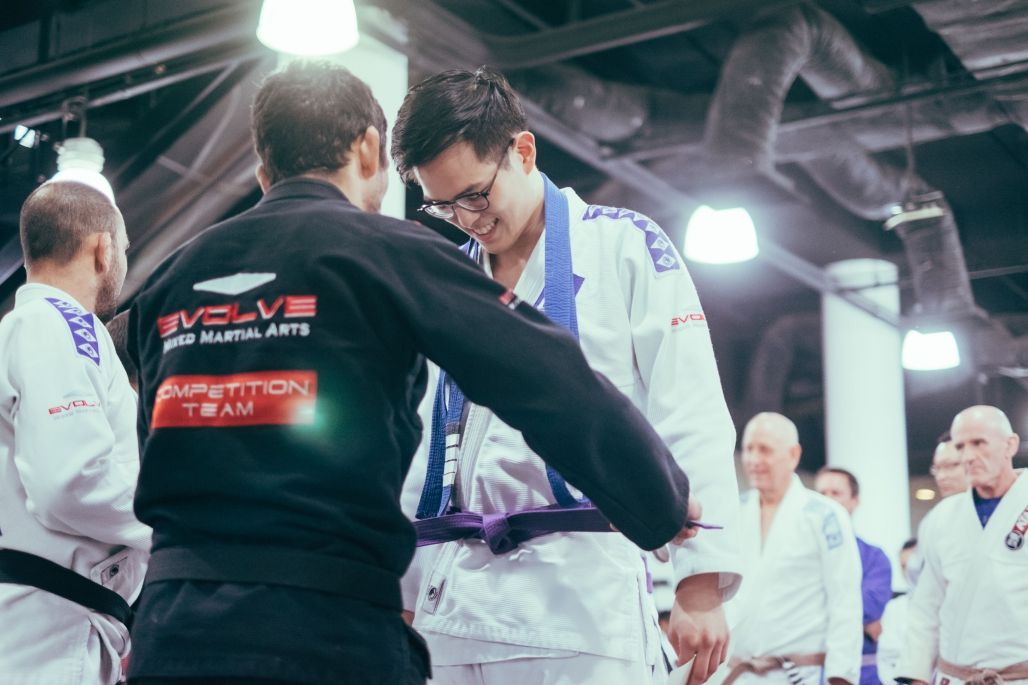 A BJJ student gets promoted at Evolve MMA (Far East Square) in Singapore.

Last but certainly not the least, having the right amount of respect maximizes your potential to learn from every experience. After all, martial arts is a lifelong journey of learning and striving to improve ourselves on a daily basis.

Respecting your opponents mean you acknowledge the moment you two will share in competition. Yes, competition is fierce and incredibly tough, but in these moments, in the heat of battle, both you and your opponent will grow tenfold from the experience you gain.

By showing respect towards each other, you allow yourself to absorb all the teachings and experience. You enable yourself to soak up the knowledge that you need to improve yourself.

Respect today is an extremely rare commodity, especially in our personal lives. We could all do better by showing a little more respect not only to our opponents but also to ourselves.